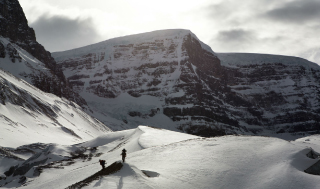 The film “Ice Calling” was among the winners at the third edition of the Ulju Mountain Film Festival. [YONHAP]

ULSAN - The winners of an annual international mountain film festival that just wrapped in the southeastern county of Ulju in Ulsan are drawing praise for making people consider the meaning of life.

The documentary film “Ultra,” directed by Balazs Simonyi of Hungary, won the grand prize in the international competition. Other winners were “Dirtbag: The Legend of Fred Beckey” for the best alpinism film, “Ice Calling” for the best climbing film, “Wonderful Losers: A Different World” for the best adventure and exploration film, “Miss Maria, Skirting the Mountain” for the best nature and people film, “W” won the jury’s special prize, “The Lonely Road” won the audience award, and “Trembling Mountain” took home the Netpac (Network for the Promotion of Asian Cinema) prize.

“Ultra” shows five ordinary people who participated in Spartathlon, a nonstop ultra-marathon contest that must be completed within 36 hours, beginning in Athens and ending 246 kilometers (152 miles) away in Sparta. The Hungarian director himself finished the extreme competition four years in a row.

“We all are running again today, not knowing where our destinations are and when we will reach them. The film gives us an opportunity to think about why we are jumping into and living a troubled life,” a juror said.

American director Dave O’Leske’s “Dirtbag: The Legend of Fred Beckey” introduces a man who discards all social norms to live as a mountaineer. The legendary Fred Becky lived only for climbing - with no family, friends or job - until he died in 2017 at the age of 94.