First ladies may meet on sidelines of summit

First ladies may meet on sidelines of summit 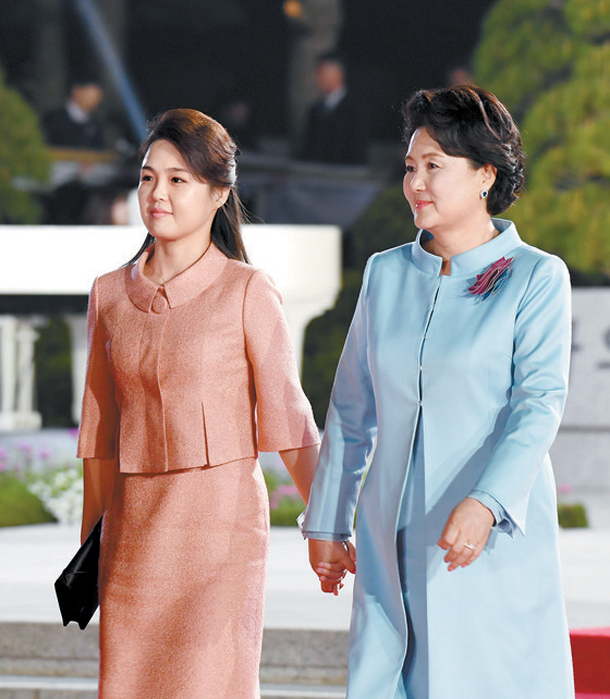 Ri Sol-ju, left, and Kim Jung-sook at the inter-Korean banquet on April 27. [YONHAP]

The wives of the two Korean leaders may meet in Pyongyang this week on the sidelines of the third inter-Korean summit, according to a South Korean government official with knowledge of President Moon Jae-in’s three-day visit to the North.

The Blue House didn’t confirm on Monday whether Ri Sol-ju, North Korean leader Kim Jong-un’s wife, will meet with Kim Jung-sook, Moon’s wife. But a high-level official from the South’s presidential office, who spoke on the condition of anonymity, said Ri “might come” to see Kim Jung-sook.

Local media outlets believe that Ri Sol-ju will appear with her husband at least once this week, given Kim Jong-un’s fondness for the international spotlight and his efforts to make himself appear to be a normal head of state.

Ri and Kim Jung-sook first met face-to-face on April 27 during the first inter-Korean summit on the South’s side of the Panmunjom border. Ri crossed the border in a black sedan to attend a dinner banquet hosted by Moon.

The Blue House confirmed her attendance only hours before Ri arrived at the venue.

Multiple sources in South Korean politics said that Ri and Kim Jung-sook may participate in a friendship-forging event this week, as the spouses of world leaders often do during state visits. Music is a common interest between the two wives, as Ri used to sing for the popular North Korean band Unhasu Orchestra before she married Kim Jong-un. Kim Jung-sook majored in vocal music at Kyung Hee University in Seoul, after which she worked as a member of the Seoul Metropolitan Chorus.

Ri’s appearances in North Korean media have grown more frequent this year. Unlike in the past, when her name was preceded by Kim Jong-un’s “wife” or no title at all, the North has been referring her as “first lady” since Feb. 8, when she joined her husband to observe a military parade celebrating the 70th anniversary of the founding of the North Korean Army.

A Blue House official told local media after the April 27 inter-Korean summit that Ri and Kim Jung-sook “chatted a lot” during the dinner banquet and that it seemed like they had “good chemistry.”