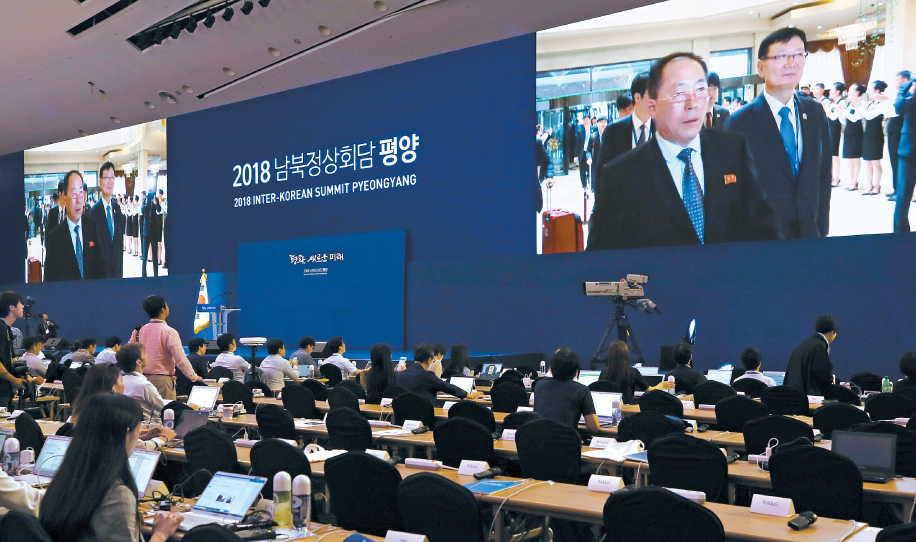 Journalists from home and abroad watch video footage sent from Pyongyang at the press center in Dongdaemun Design Plaza in Seoul on Monday. [YONHAP]

President Moon Jae-in will fly to Pyongyang at 8:40 a.m. today from Seoul Air Base in Seongnam, Gyeonggi, for his third summit with North Korean leader Kim Jong-un.

Moon and his entourage including first lady Kim Jung-sook will land at Pyongyang Sunan International Airport at 10 a.m. in the North Korean capital, the presidential office said Monday, where the president will receive an official welcome ceremony.

“An official welcome ceremony is scheduled at the airport followed by a luncheon. After the luncheon, the first round of the summit talks will be held,” said Im Jong-seok, Moon’s chief of staff, at a summit press center at the Dongdaemun Design Plaza (DDP) in eastern Seoul.

Moon’s arrival at the airport will be broadcast live.

While it remains to be seen whether North Korean leader Kim will greet Moon at the airport as his father, Kim Jong-il, did on June 13, 2000 when former President Kim Dae-jung flew in for the first inter-Korean summit, the Blue House did not conceal its hopes that Kim would.

“While I am cautious to speak about North Korean leader Kim’s schedule because it is customary for North Korea to remain tightlipped about it, I expect Kim to greet Moon personally,” said Im, who also serves as head of the summit preparation committee.

As part of the welcome ceremony, Moon is expected to inspect a military honor guard in the same way Kim did after crossing into the South Korean part of Panmunjom, which straddles the inter-Korean border, in his first meeting with Moon on April 27.

During his inspection of the South Korean honor guard, Kim looked straight ahead rather than staring at members of the guard.

After a luncheon, Kim and Moon will have a first round of talks at a yet-to-be announced venue with three main agenda items: improving inter-Korean ties; denuclearizing North Korea; easing military tensions.

The schedule for the first day differs from the two previous summits held in Pyongyang in 2000 and 2007, when the summit meeting itself was held on the second day. Former presidents Kim Dae-jung and Roh Moo-hyun both met with Kim Yong-nam, nominal head of state who serves as president of the Presidium of the Supreme People’s Assembly, on their first day in Pyongyang.

First lady Kim Jung-sook will make a visit to a local children’s hospital and a music college. She is expected to be accompanied by Ri Sol-ju, North Korea’s first lady. 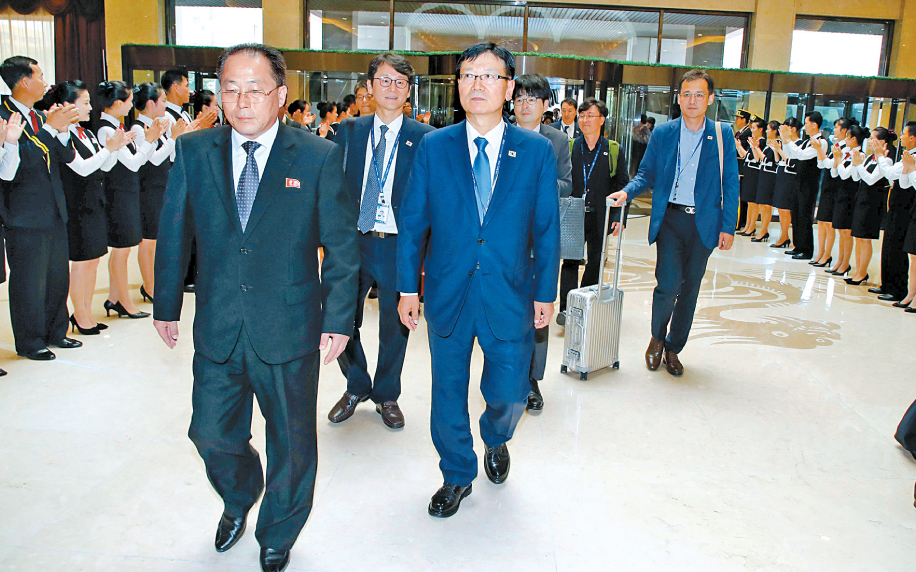 A group of major conglomerate CEOs accompanying Moon, including Samsung Vice Chairman Lee Jae-yong and Koo Kwang-mo, newly named Chairman of LG Group, will meet with Ri Ryong-nam, the deputy prime minister while the two leaders are in the first round of summit talks.

A group of political leaders including leaders of the ruling and minor opposition parties will meet with Kim Yong-nam at that time.

On the second day, Moon and Kim will have a second round of talks.

Moon said Monday he will concentrate his efforts on two issues: Eliminating any chance of a military clash and fostering an atmosphere for successful North-U.S. denuclearization talks.

“For the establishment of a permanent peace regime in the two Koreas, I will make my utmost efforts on two issues. The first is to eliminate the fear of war or any chance of an armed clash sparked by military tensions between the two Koreas,” said the president at a senior secretariat meeting at the Blue House. “The second is to facilitate the North-U.S. talks for denuclearization.”

He noted the denuclearization agenda was not to be negotiated by himself and Kim given Washington’s vital role.

“Because this is not an issue that could be resolved by us taking the lead, I will have frank discussions with North Korean leader Kim on finding a middle point between the North’s demand for ending hostile relations with the U.S. and regime security and the U.S.’s demand for denuclearization steps,” he said.

For the two countries to succeed in their negotiations, Moon said, trying to put oneself in the other party’s shoes was needed.

Chief of staff Im reiterated Moon’s point at the press briefing at the DDP.

The second agenda for the South Korean government will be “facilitating the North-U.S. talks for the sake of the denuclearization” of the North, he said.

As a mediator between Pyongyang and Washington, Moon will try to push for a framework in which the North’s denuclearization steps would be met with corresponding actions from the U.S. in order for a new type of North-U.S. relations to take root, Im emphasized.

The last point on the agenda is to look for ways to alleviate military tensions between the two Koreas.

“We are pushing for a comprehensive agreement that will build a basis of trust while easing military tensions. We will work toward eliminating any chance of military confrontation in a fundamental way and setting in place the conditions for peace in the region,” Im said.

Of the three agenda items, the issue of bringing the North closer to complete denuclearization was not discussed in the two previous Pyongyang summits in 2000 and 2007.

Im said the presidential office was being “most cautious” about the denuclearization agenda and noted it was “most tricky” of the three issues.

“We find it hard to make any presumptuous prediction [on how the discussion will unfold],” he said.

On easing military tensions, the two leaders could agree to hold high-level military talks on a regular basis on various military-related issues, such as turning the demilitarized zone into a so-called peace zone or withdrawing guard posts from there. Turning the Northern Limit Line in the Yellow Sea, over which the two Koreas’ navies have clashed in the past, into a peace zone is also an idea that has been floated.

Im emphasized the importance of the Sept.18-20 summit by reminding the press that Moon is playing the role of mediator trying to bring the North and U.S. closer to a middle place in denuclearization talks.

“As President Moon knows better about the stances of the U.S. [in denuclearization negotiations with the North] than Kim from his frequent meetings and phone calls [with U.S. President Donald Trump], I expect that he will deliver [those points on the U.S.’s positions] to Kim during the summit,” the chief of staff commented.

He said that while denuclearization would be a central issue for this summit “amid high expectations for some kind of breakthrough,” the extent to which the two Korean leaders can agree was “very limited,” a reminder that the issue should ultimately be addressed by the North and the U.S. Continuing in his role as a mediator, Moon will fly to New York shortly after the Pyongyang summit to attend the United Nations General Assembly session, which also starts today. Moon is expected to sit meet with Trump to convey Kim’s stances.