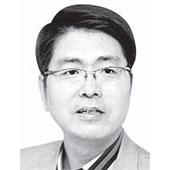 Cho Joon-mo
The author is economics professor of Sungkyunkwan University and labor adviser on the JoongAng Ilbo’s Reset Korea campaign.

Kim Young-joo, Korea’s first female minister for labor and employment, who has been in the office for a year, is counting down her days. She will exit when new nominee Lee Jae-kap is confirmed by the National Assembly.

This turning point demands that we look back at the Labor Ministry under President Moon Jae-in. The minister in charge of labor and employment must pursue the interests of the people. Under conservative governments, labor and employment policy came under fire for siding with employers. Under the progressives, the ministry is focused on the demands of large unions.

The majority of the working population does not belong to unions. Unionization in Korea is just over 10 percent. Companies have had to accommodate the labor-friendly policies of the liberal administration. Union groups saw their major issues — an increase in the minimum wage, wider scope in base salary, greater insurance coverage for occupational injuries and illnesses, and universal cutback in work hours — addressed quickly.

The government, however, dragged its feet on other pending issues like rationalizing pay structures, performance-based salaries in the public sector and loosening up working hours. Public policies are made through coordination between the government, ruling party and the Blue House.

The ruling party’s floor leader underscored the need to expand the scope of flextime when cutting back legal workweek hours. But the Labor Ministry shrugged it off, claiming that employers are ready for the new work schedule. The prime minister had to step in to impose a six-month waiver on penalties for noncompliance with the new work hour rule.

The Ministry of Employment and Labor was more or less inactive throughout last year. The minister did not voice any opinion when the deputy prime minister for the economy wrangled with President Moon’s policy chief over the side effects from the minimum wage hike. The ministry did not care to coordinate policies with the Ministry of Industry and Trade to discuss its impact on the industry.

She said her ministry would focus on grooming talent to generate innovation and encourage investment through deregulation to spur jobs. Her rhetoric has been entirely figurative, lacking the insight and expertise needed to design productive and forward-looking labor policies. She did not attempt to speak on the principles of her labor policy and persuade the media and people on the direction.

Labor administration resources were mostly spent on oversight. The ministry raised the target for annual inspection of work sites to 100,000 from 20,000, acting like a labor police force. Its proposed bills — restriction on use of contract workers and a ban on bundled bonus payments — will add to corporate woes and weigh on the job front. The public-sector members on the Minimum Wage Committee appointed by Kim have two years left in their term.

As the minister claims, it may not be fair to place the entire blame on the minimum wage hike for the disastrous job figures. New jobs created totaled 5,000 in July and 3,000 in August compared with 300,000-plus throughout last year. Nevertheless, the labor minister pressed on with measures to discourage hiring even as the Blue House and Finance Ministry fretted over worsening job conditions.

The politician-turned-minister also came under fire for using her title to vie for future votes. She went around markets to encourage shopkeepers to apply for state subsidies for hiring.

But the program has been largely shunned by shopkeepers and small merchants, as the subsidy is temporary and only increases the burden on employers, as it forces employees to be covered by the four state insurance policies. As a result, about 1 trillion won ($888 million) is left from the 2.9 trillion won budget earmarked for subsidies to employers.

The office responsible for labor policy administration promoted a politician’s stunt. The minister said the reshuffle is needed to replace exhausted officials. But the labor administration wasted its resources in the wrong place. Kim claims she had paved the way for the next minister’s achievements in the job front. But she ended up standing mostly for large corporate unions and blocking job opportunities from reaching young people.

The incoming minister must restore balance to labor and employment policy and set the house in order. The Labor Ministry should be a place where talented government officials can employ their expertise to promote jobs for the broader population, instead of tending to the needs of unions. Learning from past mistakes will help the new minister start off on the right foot.