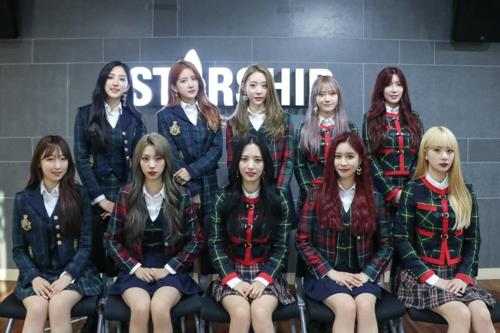 Cosmic Girls’ album “WJ Please?” is their project made without the Chinese members of the group. [YONHAP]

Three years since their official debut, Cosmic Girls, the largest K-pop girl band, with 13 Korean and Chinese members, have a lot to celebrate this year.

Several Korean members including Bona have landed roles on TV dramas and variety show programs while two Chinese members - Xuanyi and Meiqi - were the winners of a Chinese reality show.

The Chinese victory, however, has affected the lineup of the girl band, as the two Chinese members have debuted separately in China in a Chinese girl band named Rocket Girls.

Without them - and without the other Chinese member, Cheng Xiao, who has taken a leave of absence - Cosmic Girls will release a new album Wednesday as a ten-member group comprised only of Korean members.

“We are sad [about their absence]. They were so cheerful, and we miss them,” band leader Exy said in an interview with Yonhap News on Monday ahead of the release of the new album, “WJ Please?” - which is intended to be read “Would you please?”

“Would you” sounds similar to the Korean word for “cosmos” - uju.

Still, Cosmic Girls, also known as WJSN, the initials of their four-syllable Korean name, is “more confident than ever,” according to their leader.

“The Chinese members are making Cosmic Girls’s name popular in China and we are doing our share of work in Korea,” she noted.

“We had to work harder as we were under pressure to fill the void of the [missing] three members,” member Eunseo said. “As the training increased, we gained more confidence.”

The youngest member of the group, Yeoreum, was hit the hardest, as the departure of her Chinese roommates left her alone in the room she had shared with them. “I miss them so much,” she said.

The new album, “WJ Please?” is an extension of the group’s EP released in February “Dream Your Dream,” which explored the theme of a school for witchcraft.

Divided into three groups, the freshman group of Yeoreum, Dayoung and Yeonjung take on the role of instilling a dream in the magic school-themed epic on the new album. The sophomore group of Exy, Soobin and Eunseo collects dreams while the senior group of Seola, Bona, Luda and Dawon makes the dream come true.

The album’s lead track, “Save Me, Save You,” is a dreamy synth-pop number laced with piano melodies. Its lyrical message promotes love.

The other five tracks include “Hurry Up” and “You & I,” sung by all 13 members. Team leader Exy played a part in the production of all of the tracks on the album.

“I feel grateful and responsible for the chance that I have had,” Exy noted.

With the upcoming release of the new album, Cosmic Girls are hoping to get No. 1 on a local K-pop TV competition program.

They have already made it as finalists with their February song, “Dreams Come True,” when they were nominated for a weekly No. 1 song on SBS MTV’s “The Show.”