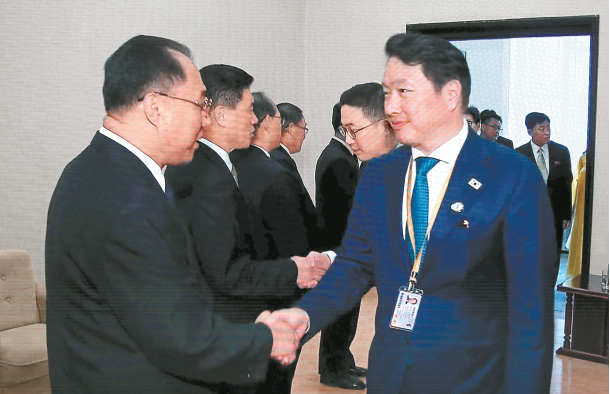 This is the first time that four leaders of Korea’s largest business empires - Samsung, Hyundai Motor, SK and LG - met with North Korea’s chief economic policy maker. Information was only available up to when Kim Hyun-chul, Moon’s secretary for economic affairs, introduced the delegation and Ri greeted them, as of press time.

“This is our first meeting but it feels like I know all of you because we are all businesspeople and share the initiative toward unification and peaceful prosperity,” said Ri at the beginning of the meeting.

“I saw a slogan attached on a new building on my way to the meeting [in Pyongyang] that reads, ‘Science-focused, talent-focused,’” Lee said. “Samsung’s basic philosophy is about technology and talent. I have never seen such slogans written in Korean anywhere else in the world.”

“I can see that Mr. Lee Jae-yong is a very famous figure on many sides,” Ri responded, which caused everyone in the room to burst into laughter. “I hope you become a famous figure in peace, prosperity and unification.”

SK Chairman Chey Tae-won introduced himself and said that Pyongyang has made a lot of progress since his last visit in 2007. Hyundai Group Chairwoman Hyun Jeong-eun said she felt heart-broken whenever inter-Korean relations soured and wishes economic cooperation resumes soon.

Born in 1960, Ri is known for his expertise in economic policy and is also recognized for his significant understanding of international relations and political affairs. He formerly served as secretary of economy at the North Korean embassy in Singapore and minister of foreign trade. He was promoted to his current post at the June 2016 meeting of the Supreme People’s Assembly.

Before departing from Seoul, chaebol leaders were in the media spotlight, but they left with no particular message. Samsung Vice Chairman Lee Jae-yong was seen briefly moving his seat on Air Force One to talk with Kim Hyun-chul, the president’s secretary for economic affairs.

Upon arriving at the Koryo Hotel, where they are staying in Pyongyang, KCCI Chairman Park Yong-maan, a famous selfie enthusiast, was spotted taking selfies with other business leaders. SK Chairman Chey Tae-won was also spotted with a digital camera. He brought a camera during his first visit to North Korea in 2017, as well.

To prepare for the meeting, the business delegation took an hour-and-a-half training session on their Pyongyang visit, according to the government. Among the four leaders of top conglomerates, Samsung’s Lee was the only one who attended the session.

The business leaders are scheduled to take a guided tour around major industrial and business-related facilities on Thursday. One of the candidates for the tour is the Nampo Industrial Complex in Nampo, southwest of Pyongyang. The complex has been mentioned as a potential site for a second industrial complex, after Kaesong.