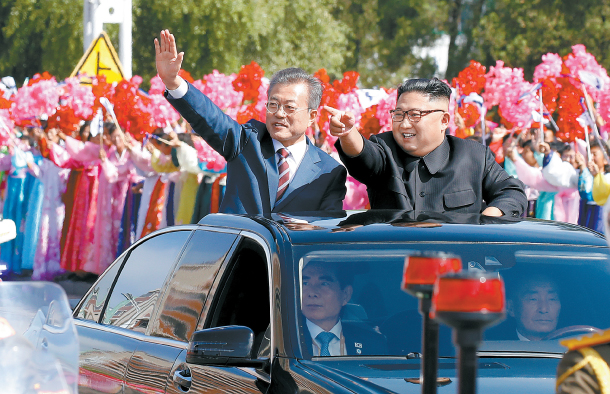 President Moon Jae-in and North Korean leader Kim Jong-un had a first round of summit talks in Pyongyang on Tuesday, the initial day of a three-day summit, the first to be held in the North Korean capital in 11 years.

The two leaders’ meeting began at 3:45 p.m., about six hours after Moon arrived by air, and ran until 5:45 p.m. with a focus on seeking ways to improve inter-Korean ties and ease military tensions along the border and, most importantly, denuclearize North Korea.

“I have met President Moon three times so far,” Kim said in his opening remarks. “And I feel that we have become really close.” He extended his thanks to Moon for opening a window for improved North Korea-U.S. relations.

“It’s not a stretch to say the historic North-U.S. summit was realized thanks to Moon’s efforts,” Kim noted.

Kim went on to say his meeting with U.S. President Donald Trump led to a stabilized situation in the region without elaborating. “I expect more progress,” he said, apparently referring to ongoing talks with Washington on denuclearization.

In return, Moon thanked Kim for a welcome “that exceeded expectations.”

“The springtime in Panmunjom has become autumn in Pyongyang,” said Moon, pointing out that it is their third meeting in five months and reflecting back on the PyeongChang Winter Olympics, Kim’s New Year’s address and his “bold decision.”

“This process came around as a result of Chairman Kim’s decision and his intention to open a new era.”

Before entering a room for the summit, the two leaders took commemorative photos and Moon signed a guest book at the headquarters with Kim watching on: “To peace and prosperity, our people’s hearts are one,” he wrote.

The first round of talks was held in the headquarters of North Korea’s Workers’ Party, which was the first time an inter-Korean summit meeting was held there.

In March, Kim held a meeting in the headquarters with Moon’s special envoy Chung Eui-yong. It was the first time an outsider was allowed inside. At that meeting Kim expressed his wish for a summit with U.S. President Donald Trump, which eventually took place on June 12 in Singapore.

What the two sides discussed during the two-hour meeting was not disclosed as of press time. A joint agreement is expected to be announced following a second round of talks early Wednesday.

While details of Tuesday’s meeting were not announced, the Blue House said Moon had three main priorities for the summit: improving inter-Korean relations; creating the right atmosphere for North Korea-U.S. denuclearization talks; and alleviating military tensions along the border.

North Korean leader Kim greeted Moon by hugging him with a big smile and Ri shook hands with Kim Jung-sook. The greeting unfolded as music was played by a North Korean military honor guard.

Kim Yo-jong was also on hand to welcome the visitors from the South.

Cheering North Korean crowds waved North Korean flags and flags of the Korean Peninsula at the airport in the same manner as at two previous inter-Korean summits in Pyongyang in 2000 and 2007.

A welcome banner at the airport read, “We wholeheartedly welcome President Moon Jae-in’s visit to Pyongyang.”

North Korean Foreign Minister Ri Yong-ho, Kim Yong-chol, and Kim Yong-nam, the nominal head of state who serves as president of the Presidium of the Supreme People’s Assembly, were also at the airport.

After the greeting, Moon inspected the North’s military honor guard in the same way North Korean leader Kim did on April 27 at the border village of Panmunjom, where the first Moon-Kim summit took place.

During the inspection, a 21-gun salute was fired in honor of the South Korean visitors, which did not happen in two previous summits in 2000 and 2007 in Pyongyang.

Following the inspection, Moon and Kim walked side by side waving at cheering crowds, who were chanting “hooray” and “for unification of the country” in Korean.

Moon went out of his way to shake hands with some members of the crowd while Kim stood behind him clapping.

It was the first time in 11 years for a South Korean president to set foot in Pyongyang. In 2007, former President Roh Moo-hyun crossed the border on foot and went to the city by car. Moon, who was Roh’s chief of staff at the time, stayed in Seoul to monitor the summit.

In 2000, former President Kim Dae-jung flew to Pyongyang via the same flight route taken by Moon today for the historic first inter-Korean summit.

On route to Paekhwawon State Guesthouse, where Moon will stay, he and Kim got out of their cars and waved at cheering crowds lining the streets.

Then the two leaders got into the same limousine and began a parade to the guesthouse, waving to crowds from the car. It was the first time that leaders of the two Koreas were honored with such a parade with the participation of Pyongyang’s mobilized masses.

An estimated 100,000 were mobilized to welcome the president at the airport and on the streets of the city.

There were many firsts on Tuesday.

It was the first time Kim greeted another country’s leader at the airport.

It was also the first time Kim hosted a summit on his own turf since taking power in late 2011.

This year alone he has had six summits before the current one: two with Moon in the demilitarized zone in April and May; three with Chinese President Xi Jinping, twice in Beijing in March and June, and once in Dalian in May; and one with U.S. President Donald Trump in Singapore on June 12.

For the three-day summit, the big question is whether Moon will succeed in improving the atmosphere for negotiations between North Korea and the U.S. on denuclearization as some kind of mediator.

Pyongyang has demanded some form of regime security from Washington, such as declaring a formal end to the 1950-53 Korean War in exchange for denuclearization steps, while Washington has called for the North to take practical denuclearization steps first, such as submitting a complete list of nuclear weapons and nuclear-related facilities in the country.

North Korea sees an end of the war declaration as a critical first step toward winning regime security since it would lead the way toward normalizing diplomatic ties with the U.S.

Before leaving for the North Korean capital, Moon said his visit to Pyongyang would yield a meaningful outcome if it led to the resumption of the North-U.S. dialogue.

Moon is expected to discuss with Kim exploring middle ground that Kim and Trump both could accept.

As a mediator between Pyongyang and Washington, Moon is trying to push for a framework in which the North’s denuclearization steps would be met with corresponding actions from the U.S. in order for a new type of North-U.S. relations to take root, according to Im Jong-seok, Moon’s chief of staff, Monday.