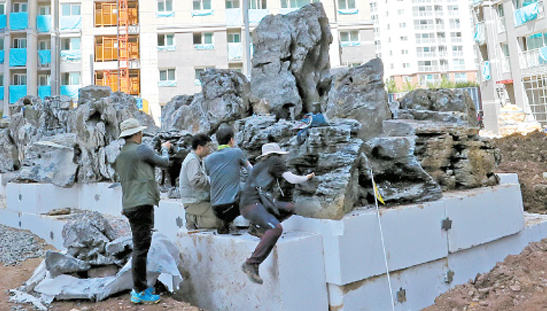 Quarantine officials on Tuesday inspect the landscape rocks from China where fire ants were discovered at an apartment construction site in Daegu. [YONHAP]

Fire ants, including a queen, were found at a construction site in northern Daegu on Monday as Korea’s latest infestation of the venomous insects spreads inland from the ports where they were first discovered.

The ants were discovered by a construction worker on landscape rocks imported from China to decorate the grounds of an apartment complex. The worker reported the finding to local authorities, and quarantine officials soon arrived on the scene.

A spokesman for the Ministry of Environment on Tuesday confirmed that the officials discovered seven Solenopsis invicta worker ants based on an inspection by the Animal and Plant Quarantine Agency.

On Tuesday afternoon, the ministry added that a queen ant had also been found on the rocks by quarantine officials, raising the risk that the insects may be reproducing far inland.

Solenopsis invicta, or red fire ants, range in size from 2 to 6 millimeters (0.08 to 0.24 inches) and are found in 26 countries, including Australia, China and the United States.

Their stings can cause a burning sensation and lead to itchy sores. While the majority of sting victims are otherwise unaffected, people with allergic reactions to the venom can go into life-threatening shock. Over 80,000 cases of red fire ant stings are reported each year in the United States. Around 100 of them result in deaths.

Officials from the Animal and Plant Quarantine Agency, environment ministry and the Daegu city government immediately quarantined the area and began to search for more ants on the surface of the rocks using small knives and brushes.

They then proceeded to spray insecticide on the rocks before wrapping them in vinyl. The surrounding area was also inspected for further ants or the presence of a queen ant, which may indicate the existence of a colony.

The landscape rocks ? around 120 in total ? are believed to have been brought from Guangzhou, China, into the country via the Gamman Container Terminal in Busan on Sept. 10 or 11. They were then transported by trucks to the construction site in Daegu.

This is the seventh sighting of red fire ants in Korea by quarantine authorities since the first at the Port of Busan in September 2017.

The last discovery of the insects at the Port of Incheon on July 7 also included a queen ant.

Unlike worker ants, queens can reproduce, laying up to 1,500 eggs a day. The presence of one can signify the existence of a fire ant colony.

Repeated discoveries of these infestations have exposed flaws in Korea’s quarantine process at shipping terminals. Officials are physically capable of inspecting only around 5 percent of all cargo containers due to the sheer volume of trade that comes through Korea. They rely on voluntary reports of fire ant infestations by cargo owners.

As the latest discovery of the ants was made on rocks, quarantine officials say measures will be taken to expand inspections of imported cargo to non-organic material. Currently, organic cargo coming from China is subject to inspection for fire ants.

The construction worker who first reported the ants to authorities will receive a reward of 300,000 won ($266.71), quarantine officials said.