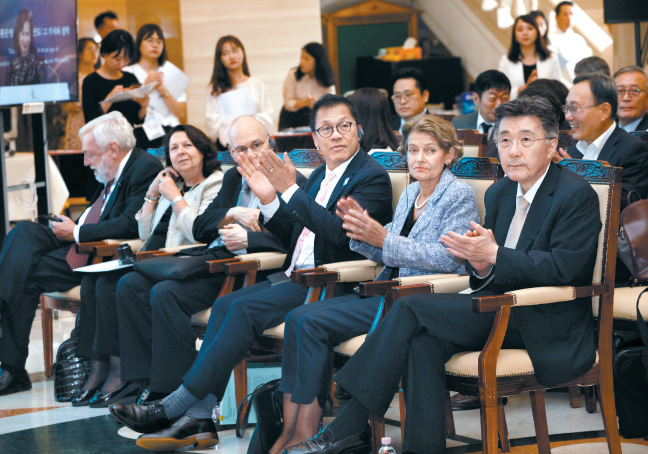 From right, Choue In-won, president of Kyung Hee University, Irina Bokova, former director-general of Unesco and Miwon Scholar of Practice and honorary rector of the humanities college at the university, Liberato Bautista, president of the Conference of NGOs in Consultative Relationship with the UN, Garry Jacobs, CEO of the World Academy of Art and Science, Maria Pia Casarini, director of Zavatti Polar Institute, and Peter Wadhams, professor of ocean physics at Cambridge University, at Kyung Hee University’s annual international conference celebrating the UN International Day of Peace at the university’s campus in eastern Seoul on Tuesday. [PARK SANG-MOON]

Global warming must be tackled head-on by Korea and the international community for the sake of world peace, according to the scholars gathered at Kyung Hee University Tuesday for its annual international conference honoring the UN International Day of Peace.

“In the past 150 years, the level of carbon dioxide and methane in the air shot up faster than ever before,” said Peter Wadhams, a professor of ocean physics at Cambridge University, at Kyung Hee University in eastern Seoul on Tuesday. “Adding carbon dioxide and methane into the atmosphere is guaranteed to make the planet warmer, which is high school physics - which some climate change deniers still deny, which is like denying the earth is round.”

The two-day conference, known as the Peace BAR Festival, celebrates the UN International Day of Peace, which falls on Sept. 21 every year. This year’s conference opened with the theme “The Korean Peninsula in an Age of Transformative Civilization; Values and Philosophy.”

Wadhams emphasized that global warming is having a great impact in the Arctic region and that the melting ice and rising sea levels will seriously threaten those living in coastal areas.

“The prediction we have is that by 2099, the world will be about 4 degrees Celsius warmer, while the Arctic region will be about 7 to 8 degrees warmer,” he said. “Take the example of ice sheets melting in Greenland. The entire surface of the ice sheet there is melting in the summer. The melted water runs down the ice sheet and pushes glaciers out into the sea.”

According to Wadhams, scientists have predicted a rise in sea levels ranging from 1 meter (3.2 feet) to as much as 4 meters by 2100.

“It’s important to get the measure right because global policy makers will have to know it to be able to make preparations for the coastal areas of their countries,” he said. “Rising sea levels raise the probability of disastrous [natural] events - it is a threat, for example, to the Bay of Bengal.”

“Extreme weather conditions lead to overall loss of crops and would hit particular areas hardest,” he said. “That could cause a lot of social unrest, or warfare, even.”

Experts gathered at the conference, which is hosted by the university and supported by the World Academy of Art and Science (WAAS) and the Conference of NGOs in Consultative Relationship with the UN (CoNGO), agreed that global warming requires the international community to take responsible action for the people threatened by its impact.

“The Philippines has been visited by the strongest hurricane ever on earth,” said Liberato Bautista, the president of CoNGO. “This is not just a matter of science, but it is also about the ethical aspect of the issue … The experience of global warming on the ground is real for people and so it behooves us to address the issue that involves food production and security as well.”

“I am proud to say that Unesco adopted last year a declaration, which we worked on for 10 years, on the ethical aspect of climate change,” said Irina Bokova, former director-general of the UN Educational, Scientific and Cultural Organization and honororay rector of the humanities college at Kyung Hee University. “When we speak about the issue, [we need to speak about] who bears the costs [of global warming].”

No one state or organization will be able to solve it alone, they said.

“Our real problem is that we are dealing with issues that cannot be addressed independently and in isolation from each other,” said Garry Jacobs, CEO of WAAS. “The academic community has to play an enormous and radically new role in bringing together the fragmented frameworks on the issue. Fortunately, we have a session on Thursday on effective global governance, which is needed for managing our climate.”

Lectures hosted at the university today include those on Korea’s society and global civilizations by Adam Michnik, editor in chief of Polish newspaper Gazeta Wyborcza, and Wan Sang-han, chair of the Presidential Commission on the Centennial Anniversary of the March 1st Independence Movement and the Provisional Government.

The conference also poses a question on the need for multilateralism. On Thursday, it will host a discussion named “A World without the UN?” with experts including Thomas Weiss, professor of Asian studies at the City University of New York, Bokova, Kim Won-soo, former under-secretary-general and high representative for disarmament affairs at the UN and Oh Joon, former South Korean ambassador to the UN and professor of peace studies at Kyung Hee University.

The Seoul Peace Forum will also be hosted together by Kyung Hee University, Korea International Cooperation Agency (Koica), the National Human Rights Commission of Korea and the Seoul Metropolitan Government on Thursday. Seoul Mayor Park Won-soon will speak at the forum, as well as Kyung Hee President Choue In-won and President of Koica Lee Mi-kyung, to discuss the role of official development assistance in achieving the UN sustainable development goals.

The Peace Bar Festival has been hosted at the university every year since 1982 under a theme related to world peace.