What is a real hanbok?

What is a real hanbok?

LEE JI-YOUNG
The author is a reporter in the art team of the JoongAng Ilbo. 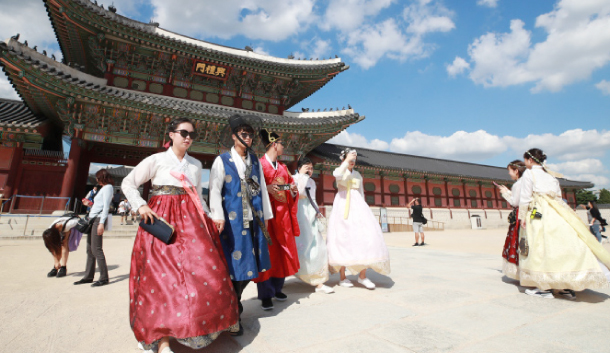 Tourists wearing “fusion hanbok” pose in front of a gate in Gyeongbok Palace in downtown Seoul on Sept. 12. The Jongno District Office has decided not to allow free admission for those wearing modified hanbok. [AP/YONHAP]

In the history of AI development, distinguishing dogs from cats was a challenging question. A three-year-old can tell the difference between dogs and cats, but a supercomputer couldn’t. In the early AI system, the characteristics of dogs and cats needed to be input first. With universal characteristics such as four legs, fur and a tail, computers would perceive almost all animals as dogs.

More specific features like the condition of the fur and the shape of the ears were added, but the AI still made errors. Dogs that don’t fit these characteristics could not be recognized. In the 2010s, deep learning using big data was used to help AI distinguish dogs and cats. What one can easily distinguish with their eyes, like the difference between dogs and cats, was impossible to be defined in words.

A movement to apply a far more complex classification to Korean traditional clothing, hanbok, has started. The Jongno District Office, which has offered restaurant discounts and other benefits to those wearing hanbok, decided not to offer the benefits to those wearing modified hanbok that do not fit traditional standards. The district office will request the Cultural Heritage Administration exclude “fusion” outfits from being granted free admission to palaces.

The district office held a conference on traditional outfits on Sept. 11. The hanbok that tourists borrow from rental shops near the palace for 10,000 won ($8.90) to 30,000 won were discussed. Attendees pointed out that these modified hanbok have excessively puffy skirt with hoops, ribbons tied on the back of the waste, flashy gold and silver accents and are made with cheap fabric. District head Kim Young-jong said that it was not desirable to give benefits to those that are not traditional.

It is impossible to draft guidelines to define the puffiness of a skirt or the amount of fabric that qualifies a “traditional” hanbok. But hopefully, the controversy would not throw a cold blanket over the culture of young people dressing up in hanbok and sharing their experiences on social media.

At the Korea National University of Cultural Heritage, which was established to educate students about traditional culture, hanbok is a specialty major in the traditional arts and craft department. At Seoul National University, there is no full-time professor who has studied hanbok, and it is difficult to pursue a master’s degree or Ph.D. in hanbok. Rather than blaming rental shops for ruining the tradition, we need to review how traditional clothing is being taught.