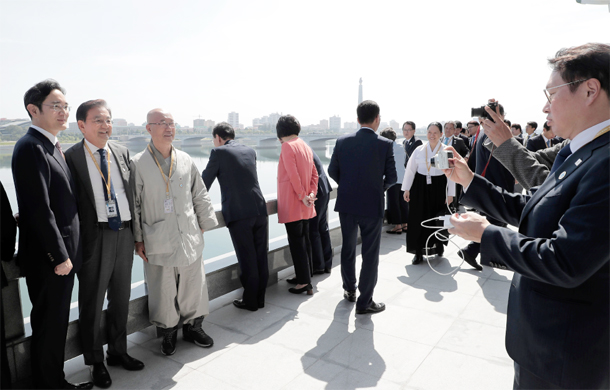 Hopes that tourism to North Korea’s Mount Kumgang and the operation of the Kaesong Industrial Complex will soon resume have been raised as the leaders of both Koreas agreed to normalize the businesses in the Pyongyang Declaration signed Wednesday.

“As soon as related conditions are prepared, we will proceed with normalization of Kaesong Industrial Complex and tourism in Mount Kumgang as well as formation of joint economic zones in the west and east seas,” read the agreement signed by President Moon Jae-in and North Korean leader Kim Jong-un on the second day of their summit in Pyongyang.

The conditions presumably refer to the possibility that international sanctions on North Korea will be eased and negotiations between the North and the United States developing further.

The Kaesong Industrial Complex, a symbol of inter-Korean cooperation, shut down in February 2016 after relations between the two Koreas soured under the conservative Lee Myung-bak administration. It has been a decade since tourism programs to the scenic Mount Kumgang resort, which began in November 1998, were indefinitely suspended after a South Korean tourist was shot dead by a North Korean soldier.

Hyundai Group, the conglomerate that has long been most active in inter-Korean business, promptly released a statement.

“We truly appreciate the bold decision to normalize tourism in Mount Kumgang and the [operation of the] Kaesong Industrial Complex made by the two leaders and we take it as very welcome news,” said the statement. “As much as the agreement entails a preposition that ‘as soon as related conditions are prepared,’ we hope the circumstances of normalization of those businesses will be completed as soon as possible.”

The group added it will “strictly” prepare to expand its inter-Korean businesses, on top of the fields it already retains an exclusive right to, with a mid- and long-term perspective. The Korean business community also welcomed the potential for inter-Korean cooperation.

“We in the business community hope that the conditions for economic cooperation mature in the imminent future and will make corresponding efforts,” said a statement from the Korea Chamber of Commerce and Industry, a top business lobbying group.

The Federation of Korean Industries, another organization representing businesses, said the ongoing summit is a historic milestone and has opened a new chapter for the joint prosperity of the Korean people.

Meanwhile, the 17 businessmen who joined Moon on the North Korean trip visited a tree nursery in Songrim city in North Hwanghae province on Wednesday morning. The nursery is named the Korean People’s Army 122nd and was completed in May 2016.

After lunch the group visited a university in Pyongyang.