Retiring justice says ideology has no place in the courtroom

Retiring justice says ideology has no place in the courtroom 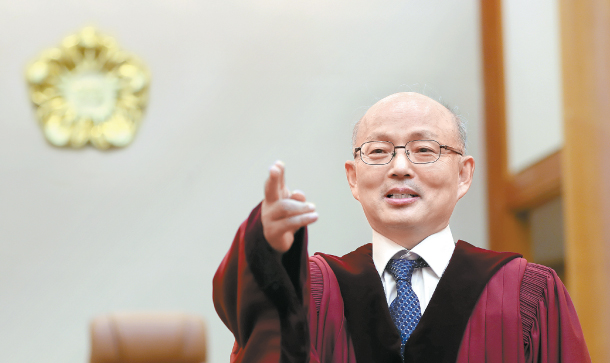 Few justices have had such a monumental impact on Korean society and politics as those on the Constitutional Court in the last five years. They have ruled on issues ranging from the decriminalization of adultery, the dissolution of a political party accused of treason, conscientious objectors to military service and even the impeachment of a president.

Ahn Chang-ho is one of the five justices simultaneously appointed to the Constitutional Court in September 2012. He has made his voice heard on each of these major rulings.

A former prosecutor who led a major investigation into an alleged North Korean spy ring last decade, he was nominated by the then-ruling Saenuri Party for his expertise in inter-Korean issues.

Analysts say his conservative leanings were reflected when he disbanded the Unified Progressive Party, which allegedly plotted to overthrow the South Korean government at the behest of the North in 2013. Ahn says there was no ideology to his thoughts, however, and joined the rest of the bench in unanimously voting to oust former President Park Geun-hye last year in one of the most dramatic events in Korean modern history.

Like his namesake and hero — the famed independence activist and one of the founders of Korea’s provisional government in Shanghai in 1919 — Ahn is known for his steadfast character and Christianity. A Bible can always be seen on his office desk.

The JoongAng Ilbo met Ahn, who retires this month, on Sept. 7 at his office in the Constitutional Court building in northern Seoul.

Q. Every time there is a change in administrations, the ideological leanings of the Constitutional Court also appears to shift radically. How do you see the current government’s picks for the new justices?

A. I find it difficult to comment because I have had little personal contact with the new candidates selected. But I can say that a drastic shift in the makeup of the court according to turnovers in presidential administrations can lead to court decisions being interpreted as ideological interpretations, which may undermine legal stability. Germany has 16 justices on its Federal Constitutional Court, with the lower and upper houses in the country’s legislature each appointing half. In the lower house, over two-thirds of all lawmakers present and half of total lawmakers must agree in order to appoint a constitutional court justice. This mechanism allows for the selection of judges based on their ability and reputation rather than their political leanings. In our case, the President, Supreme Court Chief Justice and the National Assembly nominates three justices each. I believe the time has come to bestow the legislature with the right to pick all the justices. This is because the Supreme Court and the Constitutional Court are not elected bodies and have less democratic legitimacy in relation to the National Assembly.

What is wrong with the Constitutional Court leaning left or right?

The National Assembly is operated on the basis of majorities. Legislation requires a three-fifths majority, which is currently180 votes. It is extremely difficult for a single party to control over 180 seats to dominate the legislature. But as the recent conscientious objector ruling demonstrated, the Constitutional Court can make any law unconstitutional if two-thirds of its justices agree.
A partial court can always nullify the democratic checks and balances in the legislature. In such a case the court can make a decision that defies the public will. For this reason, the makeup of the Constitutional Court should not be affected in favor of a certain ideology.
Tell us about the court’s decision to remove former President Park Geun-hye from office last year.

Then-chief justice Park Han-cheol’s decision to expedite the adjudication proceedings was based on an internal agreement between the justices to minimize the emergency state in which a democratically elected president can no longer perform the duties of her office and must delegate her powers to the prime minister. At first, there was a fair amount of disagreement between the justices over whether the case was worthy of impeachment or not. It was difficult to make a ruling purely based on the overwhelming public demand for impeachment.

Decisions were arrived at after a lengthy procedure and consultation of documents. I can tell you that a few were torn in their decision to the end, but the ruling came out unanimously with an 8-0 decision to remove Park from office. All the justices made their final decision based on their thoughts about what would be best for the nation and the people. As the final court statement read, it was not a matter of left or right.

You advocated the disbandment of the Unified Progressive Party (UPP), a leftist party accused of supporting North Korea and attempting to overthrow the South Korean government, in December 2014.

One can always criticize the decision based on political motives, but the decision to disband the UPP upheld democratic standards and provided the foundation for progressive parties to grow. As stated in the court statement, the ruling helped “expand room for progressive parties who have not overstepped the basic foundations of democracy.” Saying the decision to dissolve the UPP was a politically motivated decision is itself politically motivated. This would mean the eight who voted for disbandment were all partial while only one was fair. I think the decision to disband the UPP also helped elect President Moon, since he was no longer bound to the image of being a North Korean sympathizer.

You delivered a minority opinion in the case on punishing conscientious objectors, which was eventually ruled unconstitutional. Tell us more about that.

The court ruled 6 to 3 that punishing conscientious objectors to mandatory military service was unconstitutional. I believe this decision was legally problematic and ignores our country’s reality. I am an expert in inter-Korean relations. I’ve been to North Korea four times as the Ministry of Justice’s special legal counsel specializing in North Korean and unification-related law for two years from 1999. In that time South and North Korea made the June 15 Joint Declaration, and four major agreements of economic cooperation. North Korea is a society centered around its supreme leader, and its threat to our security remains grave. The plaintiffs — most of whom are Jehovah’s Witnesses — refused not only to participate in military training but all military related activities altogether, and only wanted to engage in social services. Even then, they refused to perform social services at the Military Manpower Administration or Ministry of Defense. Though certainly broader than the past, the plaintiffs’ logic that the concept of national defense can be expanded to encompass services like fire safety is problematic. The obligation of national defense, as stipulated in the Constitution, cannot coexist with the alternative service demands made by conscientious objectors. But those who claimed it was unconstitutional to punish them argued that the case only applied to around 500 to 600 people and would have no effect on national defense.

How do you see the prosecution’s investigation into alleged power abuse and corruption by the Supreme Court under former Chief Justice Yang Sung-tae?

Using legal terminology, I would say the case pertains to “corrupt social practices and injustices by the judiciary.” If such actions did indeed occur, then the situation must be rectified. However, an investigation into the judiciary is closely tied to the independence of the judiciary. Any probe into the matter must take this aspect into consideration, and investigators must be aware that the judiciary is the primary defender of the people’s basic rights.