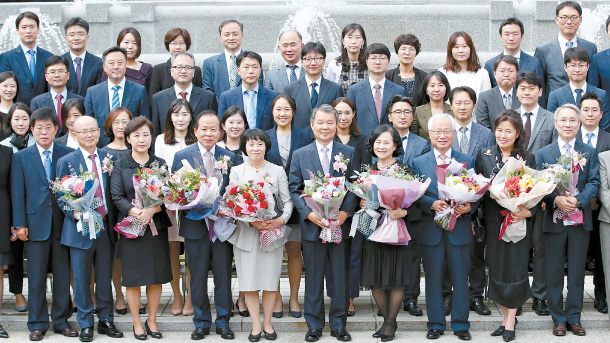 Five of the nine justices on the Constitutional Court ended their terms on Wednesday, leaving one of the country’s two highest judicial bodies effectively nonoperational until replacements are approved by the National Assembly.

Chief Justice Lee Jin-sung and four other judges - Kim Yi-su, Kim Chang-jong, Ahn Chang-ho and Kang Il-won - on the Constitutional Court officially retired at a ceremony in central Seoul on Wednesday, completing five year terms that began in September 2012. The four remaining judges on the bench will be unable to rule on pending cases with the majority of the bench vacant.

The National Assembly is set to vote today on whether to confirm three nominees chosen by the legislature’s three largest parties to replace the outgoing members, but it is unclear whether lawmakers will be able to quickly agree on their replacements. If lawmakers aren’t able to reach a decision today it could be weeks before the court is operational again, as the vote won’t be rescheduled until after the upcoming Chuseok holiday.

The president, legislature and Supreme Court chief justice each appoint three judges to the Constitutional Court’s nine-member bench. Of the three posts filled by the National Assembly, the two largest parties customarily nominate one each and agree on a moderate to fill the third seat.

But the results of the parliamentary election in 2016 left both major parties - the Democratic Party and Liberty Korea Party - without a hold over the legislature, raising questions over how justice Kang Il-won, the moderate on the bench who was appointed as a bipartisan compromise candidate in 2013, would be replaced.

Lawmakers eventually agreed to leave the nomination of the last seat of the Constitutional Court under the legislature’s control to the third largest party - the Bareunmirae Party - which eventually picked Lee Young-jin, a Seoul High Court judge with a record of moderate rulings.

The Democratic Party, meanwhile chose Kim Ki-young, a progressive judge who ruled in favor of victims suing the state for damages suffered under past authoritarian regimes, while the Liberty Korea Party picked Lee Jong-seok, the chief presiding judge for the Seoul High Court, who has had a pro-business record throughout his 30-year career.The confirmation hearings for all three nominees were held throughout the last few weeks, and candidates were grilled by lawmakers on their personal backgrounds and ideological stance on issues such as abortion, homosexuality and human rights.

Meanwhile, the Supreme Court’s Chief Justice Kim Myeong-su last month nominated Lee Seok-tae, a human rights lawyer, and Lee Eun-ae, the interim chief presiding judge of the Seoul Family Court, as his picks to fill the vacancies left by Lee Jin-sung and Kim Chang-jong. Though the legislature’s approval is formally required, the president typically appoints these candidates under his discretion.

Also to be decided today is the pick for chief justice of the Constitutional Court. The president names the chief justice from among those currently on the bench, but the decision has to be approved by the National Assembly.

On Aug. 29, President Moon Jae-in nominated Yoo Nam-seok, a liberal-leaning judge that he appointed to the court, as Lee Jin-sung’s replacement as chief justice. Yoo’s confirmation hearing will also be held today in the legislature, though his liberal record is likely to get a hostile reception from the conservative opposition.

The potential of an extended recess of the court, which decides the constitutionality of key issues, has invited criticism over the court’s convoluted makeup and appointment process that involves all three branches of government and is prone to constant delays.

Retiring Chief Justice Lee Jin-sung made a rare remark on the issue in his final address at the departure ceremony held for the five outgoing justices at the Constitutional Court building’s assembly hall in central Seoul.

“The Constitutional Court has no authority as to the composition of the court,” Lee said. “In this regard there are concerns that the nominations for the bench are too vulnerable to influence from other political branches.”

Analysts say that the fact that three seats on the bench are in the hands of the Supreme Court, which is currently embroiled in a credibility crisis due to a power abuse scandal involving its former chief, undermines the authority of the Constitutional Court, as well.