Moon, Kim to go to Mt. Paektu together today

Moon, Kim to go to Mt. Paektu together today 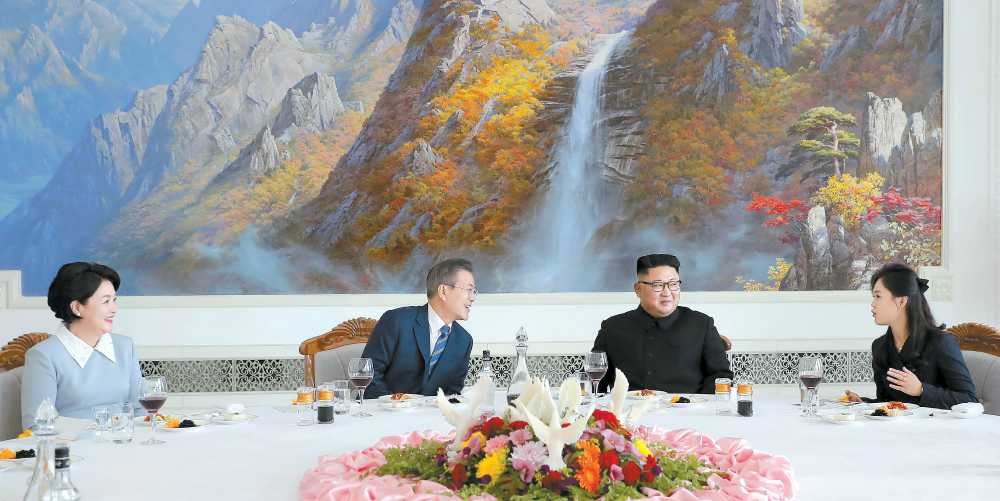 At 2,744 meters (9,003 feet), Paektu is the highest mountain on the Korean Peninsula, an active volcano that straddles the China-North Korean border and which holds great cultural significance for both Koreas because it’s considered the mythical birthplace of the Korean race.

In North Korean society, it’s better known for something else - where founding father Kim Il Sung fought against Japanese colonial forces in the early 20th century, and where his son, Kim Jong-il, was born. That’s at least what North Koreans are taught, though South Korean intelligence authorities believe Kim Jong-il, the father of North Korea’s current leader, Kim Jong-un, was born someplace else.

Paektu is a key propaganda tool that highlights the god-like images of North Korea’s ruling dynasty, a pillar of the personality cult surrounding the Kims.

The Blue House tried to distance itself from any controversy Moon could possibly face when he returns home later today.

Yoon Young-chan, Moon’s senior secretary for public affairs, stressed Wednesday at the press center in Dongdaemun District, eastern Seoul, that Paektu was Korea’s “spiritual mountain” and that Moon had consistently said he wished to reach the summit from North Korea’s side one day. It appeared Pyongyang took that into consideration when they suggested he and Kim Jong-un visit the mountain together, Yoon added.

Blue House spokesman Kim Eui-kyeom, who first broke the news about the visit during a live press briefing in Pyongyang on Wednesday, said Kim Jong-un personally asked Moon to go to Paektu with him, and Moon accepted. The logistics, such as how they were going to get there, were being worked out, the spokesman continued. The spokesman said whether or not the two leaders will actually get to the top, where there is a crater lake, hinges on weather conditions. 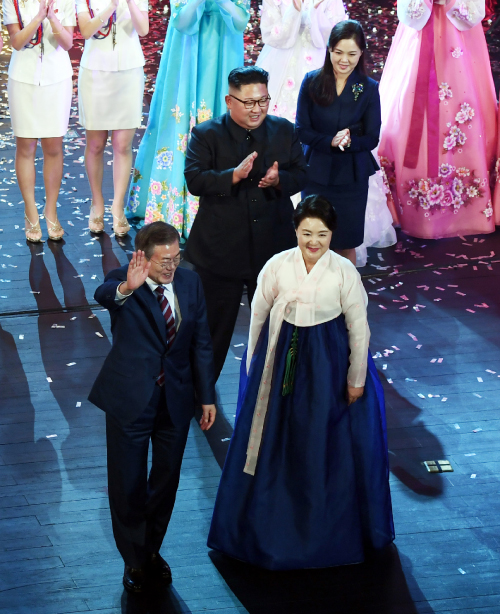 Moon, first lady Kim Jung-sook, Blue House aides and reporters will probably take a direct flight from Pyongyang Sunan International Airport to Samjiyon County in Ryanggang Province, where the mountain is located, and drive the remaining distance, the Blue House spokesman said. It was not known whether Kim Jong-un’s wife, Ri Sol-ju, will accompany her husband.

A visit to Paektu often precedes significant decisions by North Korean leaders, which could mean Kim Jong-un might make a major announcement of some sort soon. In November 2013, he visited the mountain with his aides a month before he executed top officials including Jang Song-thaek, his uncle and political guardian. He visited the mountain again in April 2015, just before executing Hyon Yong-chol, a former defense chief.

He also made a pilgrimage after North Korea’s fifth nuclear test in September 2016.

As Moon and Kim Jong-un were holding the second and last part of their third summit on Wednesday morning, their wives, Kim Jung-sook and Ri Sol-ju, visited the Mangyongdae Schoolchildren’s Palace in Pyongyang, a public facility for extra-curricular activities, where they dropped by a gymnastics hall, swimming pool and theater.

Moon’s special delegation of leaders from political, business, social, cultural and religious sectors was guided through a separate tour of the palace to see a science hall and performing arts center. The delegation joined Kim Jung-sook and Ri at the theater, where they were shown a short performance by the palace’s students.

For lunch, Moon and his delegation were invited to the famous Okryu Restaurant, where they enjoyed naengmyeon, or cold noodles. In the afternoon, they were escorted to the Mansudae Art Studio for a tour of sculptures and artworks.

Some South Korean conservatives viewed Moon’s visit to the art studio with skepticism since the company, which churns out propaganda materials for the regime and sells works to the North’s very few allies, is blacklisted under UN Security Council Resolution 2371, passed in August of 2017, for funneling cash to North Korea’s nuclear and ballistic development programs.

It also fell under unilateral sanctions of Seoul and Washington that December for similar reasons.

Moon’s visit to the Mansudae Art Studio itself didn’t violate UN sanctions or those of Seoul or Washington, but a retired diplomat in South Korea raised concerns that it might have sent the wrong message to the Donald Trump White House at a time when the U.S. has been trying to increase pressure on the regime.

South Korea’s business leaders didn’t go to the Mansudae Art Studio. They visited Tree Nursery No. 112 of the North Korean People’s Army in Songrim, North Hwanghae Province, on which Kim Jong-un recently ordered reconstruction. Then they dropped by the Pyongyang Teacher Training College, which trains teachers for pre-school and elementary school students in Pyongyang.

In the evening, Moon, his wife, his cabinet and closest aides from the Blue House were expected to have dinner at the a seafood restaurant, while Pyongyang locals were dining at other tables within the same room.

After dinner, the South Korean delegation was scheduled to watch a mass gymnastics performance entitled “The Glorious Country” at the May Day Stadium. Pool reports on the event weren’t issued as of press time Wednesday, but Yoon Young-chan, Moon’s senior secretary for public affairs, said the show was planned to last for about an hour, with 150,000 North Korean spectators watching.

News that Moon was about to see the mass gymnastics performance also struck a sensitive cord for some South Koreans on the right because the North holds the games to instill discipline and collectivism in North Korean schoolchildren while impressing the outside world with its socialist values.

Pyongyang has a long history of putting on extravagant gymnastics performances in the fall. The country’s well-trained and highly disciplined gymnasts and dancers, many of them schoolchildren, move in perfectly synchronized forms in front of a large crowd, including visitors from abroad.

In the backdrop of the gymnastics show, tens of thousands of other children usually flip through colorful placards to create a series of mosaic images and propaganda slogans pledging allegiance to the government.

The show that North Korea put up for Moon and his entourage on Wednesday night was said to have been running at the stadium from early this month to celebrate the 70th anniversary of the regime’s founding.

Aware of the possible criticism, Yoon, the Blue House senior secretary for public affairs, said Wednesday in a press briefing in Seoul that Pyongyang has “modified the performance in consideration of [the South Korean] delegation as much as possible.”

On Tuesday evening, after Moon and Kim Jong-un held the first part of their summit, they saw a concert by North Korea’s Samjiyon Orchestra at the Pyongyang Grand Theatre. The orchestra held two concerts in South Korea last February to celebrate the PyeongChang Winter Olympic Games.

According to pool reports, the orchestra sang the South Korean song “Man is a Ship, Woman is a Harbor,” and scenes from the April 27 inter-Korean summit and athletes from both Koreas playing on Olympic joint teams were shown in the background.