Moon and Kim vow to end military confrontation on peninsula

Moon and Kim vow to end military confrontation on peninsula 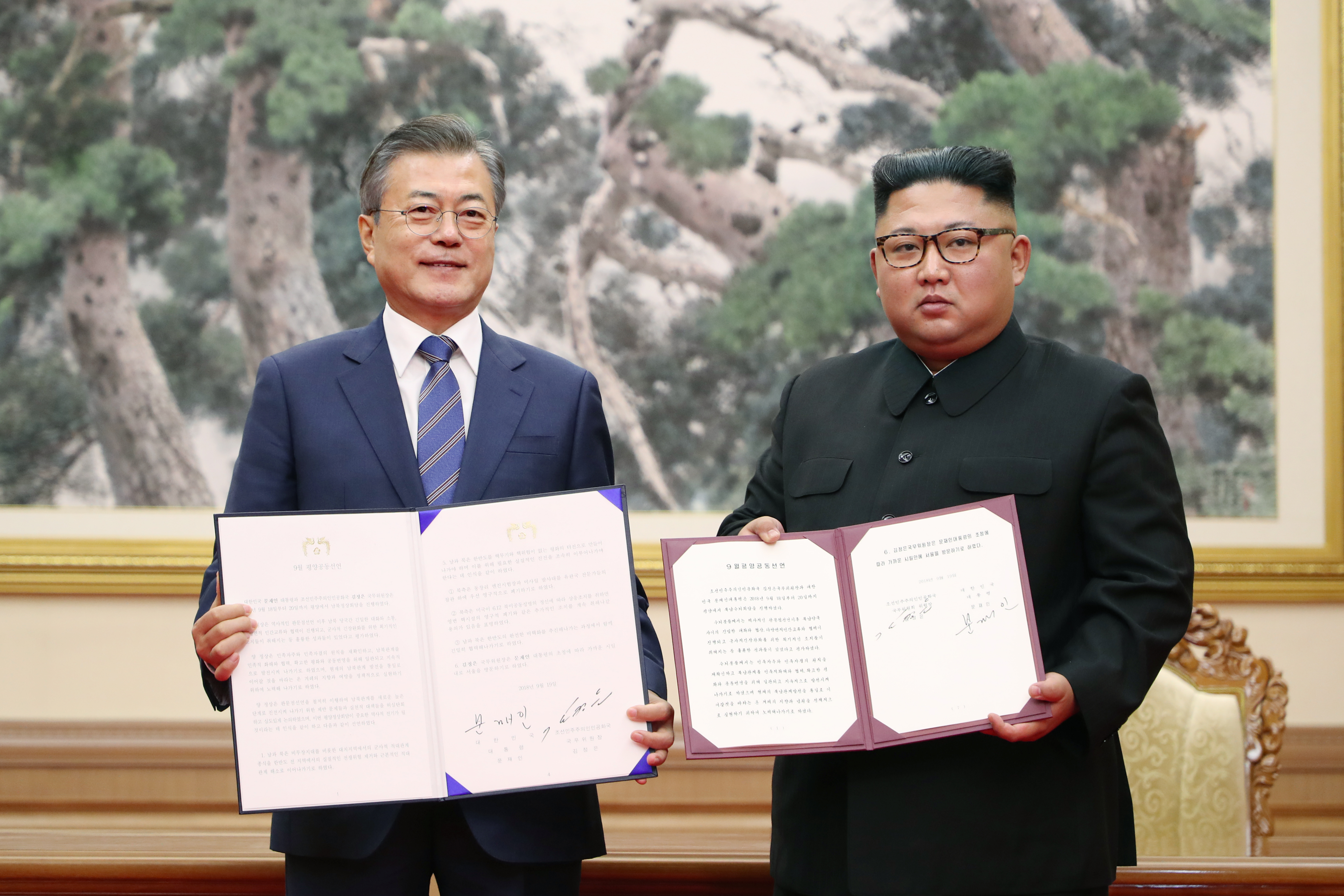 President Moon Jae-in and North Korean leader Kim Jong-un agreed to halt all military acts that could spark conflict along the border, promising to end confrontational relations and the threat of war on the Korean Peninsula.

The two leaders on Wednesday also reaffirmed their commitment to a nuclear free Korean peninsula with North Korean leader Kim promising to invite foreign experts to verify the dismantling of a long-range missile engine testing site.

He also offered to shut down the country’s most important nuclear facility -- if the United States offers “corresponding measures” in return.

“The South and North agreed to work toward terminating any chance of war and improving the hostile relationship [between the two militaries] in every corner of the Korean Peninsula beyond the demilitarized zone,” read an agreement signed by Moon and Kim after a second round of summit talks in Pyongyang.

To prevent any accidental armed clash, the leaders agreed to form a joint military committee to coordinate and communicate with each other.

They signed the joint agreement in front of members of Moon’s entourage and North Korean officials during a press conference broadcast live from the Paekhwawon State Guesthouse, where a second round of summit talks were held Wednesday morning.

The two Koreas adopted a separate joint statement signed by defense chiefs of the South and North as an annex to the Moon-Kim statement. 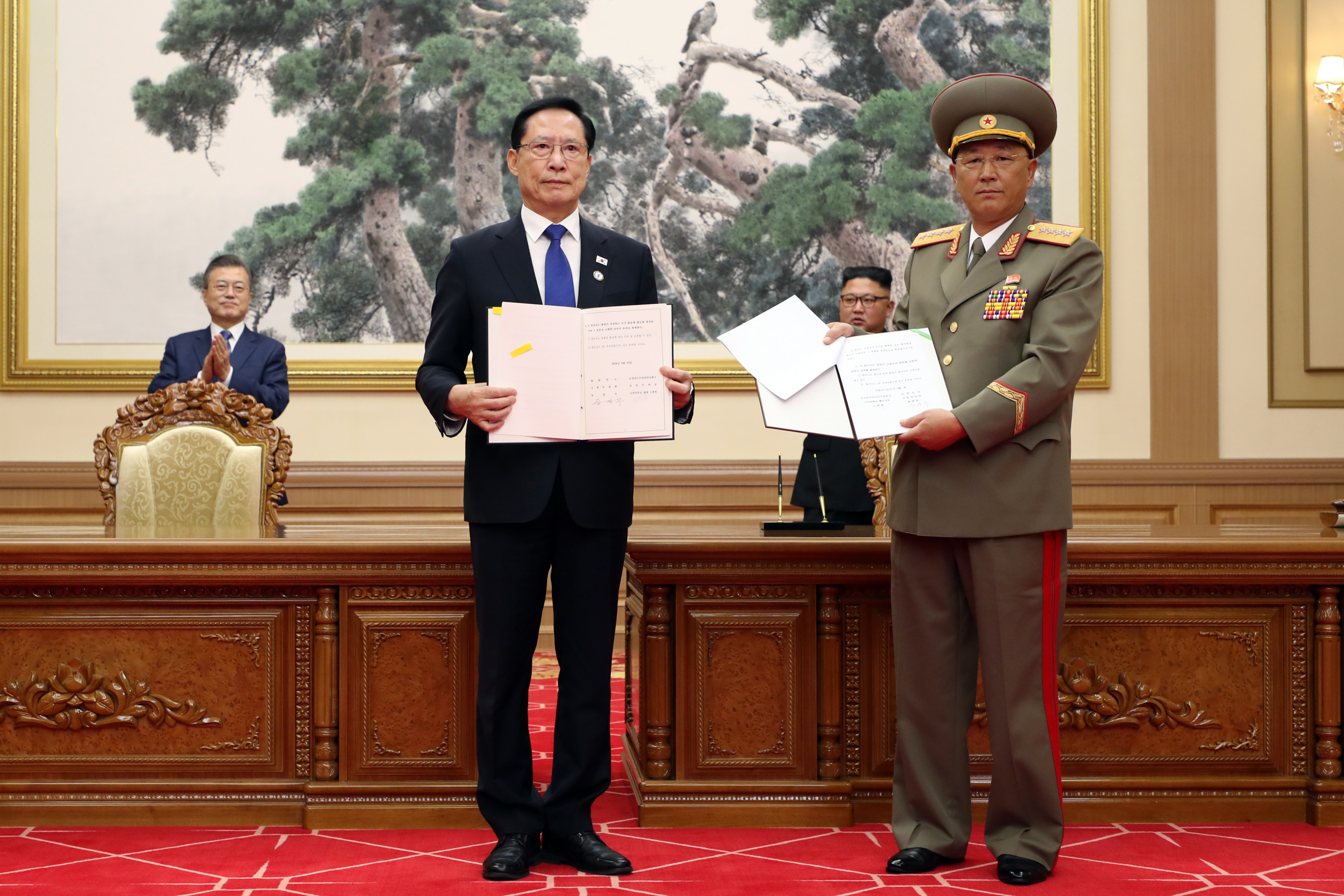 To reduce any chance of military conflict, the two sides agreed to cease “all confrontational acts against each other that are sources of military tensions and clashes in all domains: ground, sea, and air,” read the statement signed by South Korean Defense Minister Song Young-moo and his North Korean counterpart No Kwang-chol.

Specifically, the two Koreas agreed to stop all military drills along the demarcation line starting from Nov. 1, including artillery drills and nighttime field exercises within five kilometers (3.1 miles) of the demilitarized zone (DMZ).

The military agreement went on to say the two Koreas would never resort to violence “under any circumstances,” emphasizing that issues that could lead to armed conflict would be resolved through peaceful means.

“The South and North today agreed to get rid of all threats in every part of the country that could spark war,” said Moon during a live press conference standing next to North Korean leader Kim.

To that end, he said the two sides would form a joint military committee to implement agreements through regular consultations.

The two also agreed to withdraw all guard posts from the DMZ. As a preliminary measure, all guard posts that are closer than 1 kilometer from each other will be withdrawn.

“While the sound of artillery shells stopped with the 1953 armistice [that halted the 1950-53 Korean War], the war has affected our lives over the past 65 years,” said Moon, apparently referring to the fact that the Korean War has not formally ended since no peace treaty was ever signed, leaving the two Koreas technically at war.

“By turning the Korean Peninsula into a permanent peace zone, we now can put our lives back on a normal track,” he continued.

Moon and Kim also reaffirmed the principle of a nuclear-free Korean Peninsula with Kim pledging to invite international experts to the North’s Sohae missile engine testing site to verify its dismantling.

“The North agreed to terminate permanently the Tongchag-ri engine testing site and a launch stand there with experts from related countries present [for verification],” read the joint statement.

Kim even offered to shut down his main nuclear weapons facility but only after the U.S. comes through with something to make such a major capitulation worthwhile.

“The North has expressed its intention to take additional [denuclearization] measures such as the permanent dismantlement of the Yongbyon nuclear center,” the statement read, “should the U.S. take corresponding measures in accordance with the June 12 North-U.S. summit.”

In the live press briefing, Kim offered remarks stressing his commitment to ridding his country of nuclear stockpiles, saying, “We have adopted a military agreement to end a tragic and brutal confrontation and history defined by hostility sustained for decades.”

Then he said, “We have affirmed our commitment to making the Korean Peninsula a land of peace free from nuclear threats and nuclear weapons.”

But there was no mention of North Korea producing an inventory of its nuclear stockpiles and nuclear-related facility in the joint statement or at the press briefing, which the U.S. sees as a vital step toward denuclearization.

The signing ceremony followed an hour-long meeting between Kim and Moon, which began at 10:05 a.m. Kim was accompanied by Kim Yong-chol, vice chairman of the Central Committee of the Workers’ Party, while Moon had Suh Hoon, director of the National Intelligence Service, at his side.

“We have opened a path toward peace. And now we have to turn this path we have just paved into a path of complete denuclearization and turn it into action,” said Moon during the conference.

Complimenting his North Korean counterpart for a commitment to denuclearization, Moon said, “Kim has clearly shown us his vision for the denuclearization of the Korean Peninsula.

Kim and I also share a vision for a Korean Peninsula free from the fear of war and nuclear weapons.” In high praise of Kim, Moon continued that Kim had “answered the wishes of the Korean people and the world.”

On the inter-Korean economic front, Moon and Kim agreed to begin reconnecting railways and roads along the east and west costal lines by the end of this year.

“As soon as conditions are right, the resumption of the Mount Kumgang tours and the joint Kaesong industrial complex will follow,” said Moon.

By saying these joint economic ventures would be resumed under the right conditions, the two leaders acknowledged that international sanctions on North Korea prevent that economic cooperation for the time being.

The Kaesong industrial complex was the last surviving example of inter-Korean business cooperation before it was shut in February 2016 in the aftermath of North Korea’s fourth nuclear test a month earlier.

Tours to Mt. Kumgang were stopped in 2008 after a North Korean soldier fatally shot a South Korean tourist.

Moon also said he expected the immediate beginning of cooperation in the area of health and welfare to prevent the spread of contagious diseases across the border.

On the issue of families separated by the Korean War, the two leaders agreed to open visiting centers where divided families could be reunited with their loved ones. The two sides will also discuss allowing exchange of letters and video reunions.

The Moon-Kim agreement also stipulates the two sides will discuss creating a joint economic zone in the Yellow Sea as well as a joint special tourist zone in the East Sea.

To foster cultural and social exchanges, the two Koreas will jointly commemorate the 100th anniversary of the March 1st independence movement against Japanese colonial rule in 1919. For cultural exchanges, a North Korean art troupe will stage a performance in Seoul next month.

Reflecting on his agreements with Moon, Kim remarked the “world will now see what the Korean people will make of their own future” in a departure from a past marked “by suffering and agony” due to a division.

“I requested Chairman Kim pay a visit to Seoul and he agreed to do it at an early date, which means by the end of this year unless there are special circumstances,” Moon said.

“Kim’s visit to Seoul will be the first such a visit by a North Korean leader and present a groundbreaking turning point in inter-Korean relations,” he continued.

A senior Blue House official expressed the hope that Kim’s promise to invite international experts to the missile engine test site for dismantlement verification would allay the international community’s questioning of the North’s denuclearization pledge.

“As President Moon announced today, the North has decided to terminate the Tongchang-ri missile engine testing site and a launch pad there and allow an inspection by international experts, including those from the U.S. I expect that these steps would greatly help allay the international community’s mistrust that such dismantlement was only for show [without the inspection],” Chung Eui-yong, Moon’s national security adviser, told reporters in Pyongyang.

“Based on many denuclearization points discussed between the two leaders, President Moon would be able to discuss with President Trump ways to accelerate the Pyongyang-Washington talks in an upcoming Korea-U.S. summit early next week,” the adviser continued.