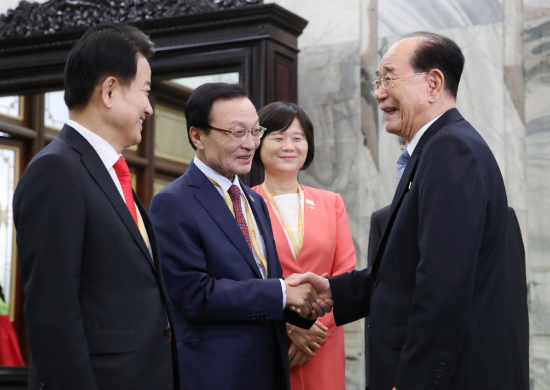 Lee Hae-chan, chairman of the South’s ruling Democratic Party (DP), proposed to hold an inter-Korean parliamentary meeting this year in talks with Kim, who serves as president of the Presidium of the Supreme People’s Assembly, the North’s rubber-stamp legislature.

A little before 10 a.m. on Wednesday, Lee, accompanied by minor opposition heads Chung Dong-young of the Party for Democracy and Peace and Lee Jeong-mi of the Justice Party, visited the Mansudae Assembly Hall to meet with Kim. The North’s side included An Tong-chun, a vice chairman of the Supreme People’s Assembly, and Kim Yong-dae, vice president of its Presidium.

The DP’s Lee thanked Kim for taking time out of his busy schedule, to which Kim said with a sense of humor, “If we were able to meet here earlier yesterday, we would have had more leisure to talk about everything, but time is limited so we might have to make things concise like a student giving his doctoral dissertation defense.”

Kim also told Lee that when he heard news of Lee becoming the head of the DP, “We had faith that this would be the beginning of the dawn of unification nearing again.”

The party chiefs also proposed to hold a joint event next year to mark the 100th anniversary of the March 1 independence movement.

However, the 50-minute meeting came after the three South Korean party heads failed to show up on time for a meeting Tuesday afternoon at the Supreme People’s Assembly to meet with its vice chairman with An Tong-chun and other North Korean officials.

The North Koreans were said to have expressed disgruntlement at being kept waiting and the meeting Tuesday was canceled.

The immediate reason for their failure to show up was not disclosed by the Blue House. There has been speculation that the party leaders wanted to have a meeting with a higher-level official, namely Kim Yong-nam.

However, Lee explained to reporters Wednesday morning ahead of meeting Kim Yong-nam that there had simply been a “communication issue.”

Lee said they had initially planned on the three party chiefs making a visit to the assembly. Then the South Korean delegation increased in size because ministers and other officials did not join in the inter-Korean summit meeting between Moon and North Korean leader Kim Jong-un.

Lee said that the party leaders had hoped to have a separate meeting.