Ju Ji-hoon throws himself into his latest character: The ‘Dark Figure of Crime’ actor found a new challenge: Busan dialect

Ju Ji-hoon throws himself into his latest character: The ‘Dark Figure of Crime’ actor found a new challenge: Busan dialect 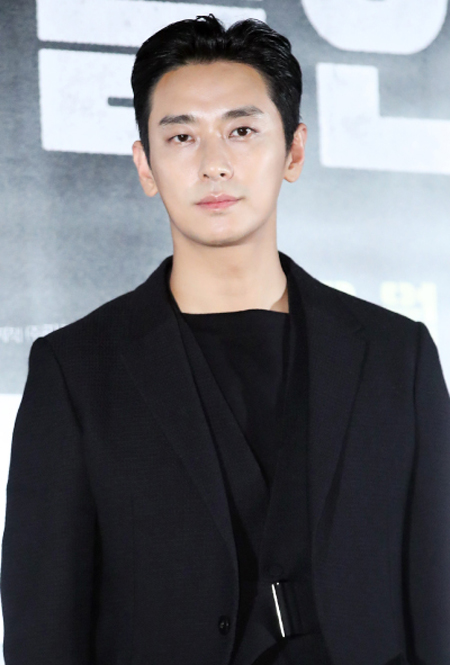 Actor Ju Ji-hoon is not afraid of trying new things.

But when it came to playing a murderer who speaks with a strong Busan dialect, he was a bit worried. Eventually, he felt up for the task and decided to play the villain in “Dark Figure of Crime,” which hits theaters on Oct. 3.

The actor, who impressed audiences this summer in “Along with the Gods: The Last 49 Days,” is now showing fans how much of a chameleon he can be. In “Dark Figure of Crime,” he plays an imprisoned murderer who outsmarts everyone around him. He shares information about the crimes he has committed to a detective and figures out a way to get his time in prison cut.

“Once you make an impression with a character that has a strong image, that image sticks in people’s [minds] for a long time,” said Ju, adding that he considered whether the character was someone he wanted to invest the next 10 years into.

It was fellow actor Kim Yun-seok who helped Ju decide to take on a new challenge. Once he saw that Kim had signed on to the film, Ju felt more confident about the role.

The following are the edited excerpts from an interview the actor had with Ilgan Sports, an affiliate of the Korea JoongAng Daily, in which he spoke about his passion for taking on a new challenge, learning how to speak with a Busan dialect and his future goals.

Q. How did you train yourself to speak with a Busan dialect?

A. I worked with the director, who is the writer of the movie as well. At first, I recorded [the director saying things in dialect] on my smartphone, but later on, the director suggested to use a cassette tape player. When you listen to a recording on a smartphone, you have to be looking at the screen the whole time. But with a cassette tape player, you just need to know [which button to press]. I like walking so I walked around for four to five hours listening to this tape. I spent about eight hours practicing.

Was it difficult to learn?

In fact, I have long enjoyed the Busan dialect because I think it has a warm, welcoming feel to it, so I wanted to speak the dialect. But it was more difficult than I expected. The dialect is something that is comfortable for many, so if I didn’t deliver it right, it wouldn’t seem natural and people could [easily criticize me] for not doing the job well. Actors are supposed to express their feelings through every movement of their body and their lines, but all those things became my weakness. On set, everyone except one actor was from the Busan area. It gave me a lot of stress.

Do you think you are creating a certain image that the audience can remember you with?

I didn’t want to have any title because I don’t want to be trapped. I’m just thankful. There are so many things to be thankful for. I think working with talented veteran actors and staff has forced me to show more of my talent. I don’t know if that’s true, but people who know me have been saying that. I’m 37 and soon will be in my 40s. Because the more senior actors have helped me, I can just completely throw myself into the [characters], I want to be that person to those younger actors, who can show them how to throw themselves into their roles. That’s my wish and my worry these days.