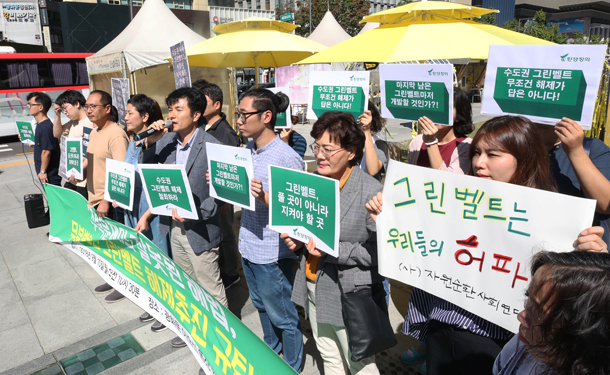 An environmental group on Sept. 10 stage a protest against the government’s move to ease regulations on the greenbelt to stabilize soaring housing prices. [YONHAP]

On the desk was a sketch of the capital region road network drawn by President Park Chung-hee. He drew a circle around the sketch and told the land planning officer at the Ministry of Construction, “You know the greenbelt. Just set it around here like this.”

After being briefed about the greenbelt in the United Kingdom, Park wanted one for Korea. It was June 1971. That’s how the greenbelt development restriction zones were established. When the first greenbelt was defined, Minister of Construction Tae Wan-sun had 5,000 pyeong (4 acres) of forest land near Namtaeryeong — which he inherited from his father — within the development restriction zone, but could do nothing about it.
By 1977, 5,397 square kilometers (1.3 million acres) of land was designated as the greenbelt. It adds up to nine times the size of Seoul. For 20 years, it did not shrink, but that doesn’t mean it was left untouched. Regulations were lifted to allow the renovation and expansion of houses and to build schools, libraries and regional offices. These measures were mostly issued before elections.

It was in the Kim Dae-jung administration that the greenbelt took its first hit. In 2000, a development ban was lifted on 11 square kilometers to make the Sihwa Industrial Complex in Gyeonggi and Changwon Industrial Complex in South Gyeongsang. For three years from 2001, 1,256 square kilometers of greenbelt disappeared as the ban was lifted “from the areas with little preservation value to protect property rights.” The Lee Myung-bak administration even lifted the ban on the greenbelt in Gangnam and Seocho districts to build apartments to control soaring housing prices.

Perhaps taking a cue from Korea’s example, development was debated in the United Kingdom, which was the model for Korea’s greenbelt. Some argued that there was not enough land to build housing and some greenbelt areas in London should be declassified. As the real estate price doubled in ten years, it was considered a way to control housing prices. But London chose preservation. In the mid-and long-term urban planning draft announced by the end of 2017, London is to further reinforce the greenbelt and public green space preservation.

In Korea, 30 percent of the greenbelt is gone and only 3,854 square kilometers remains. The government has asked the Seoul city government to remove the greenbelt to stabilize real estate price, but Seoul refused.

The government and the city of Seoul had a similar confrontation during the Lee Myung-bak administration. At the 2008 government inspection before the Gangnam and Seocho greenbelt development was finalized, then Seoul mayor Oh Se-hoon said it was not desirable to lift the greenbelt and build housing. Perhaps he was right.