Cho Seung-woo is a man with a message: ‘Fengshui’ touches on the downsides of power struggles and greed

Cho Seung-woo is a man with a message: ‘Fengshui’ touches on the downsides of power struggles and greed 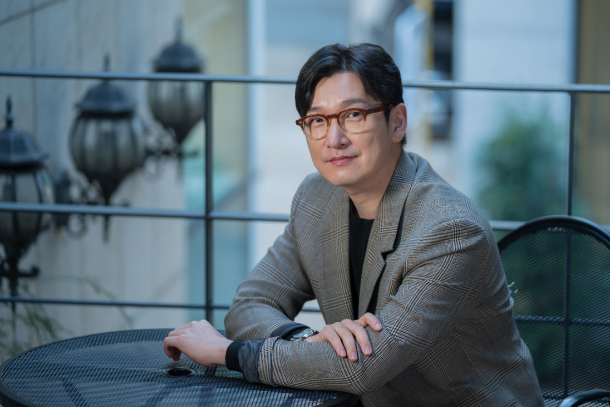 Actor Cho Seung-woo returns to the silver screen in the period flick “Fengshui,” which touches on the futility of power struggles that involve betrayal and loss. [MEGABOX PLUS M]

For high profile actor Cho Seung-woo, whether he plays a starring role or a supporting character is not important when accepting a role. Instead, the most important element to the 39-year-old is whether the film has a clear message.

Based on his solid conviction, the upcoming movie “Fengshui” was a natural choice for the actor. One of the front-runners fiercely vying for the top of the box office during Chuseok, a popular movie-going season, “Fengshui” is a period movie that shows the futility of obsessive fights over power.

“I have a solid standard for deciding which film to star in,” said Cho during an interview held in central Seoul last week. “I don’t like the kind of works that simply follow the trend. I usually avoid works that merely look fancy on the outside.” Cho continued, “My goal as an actor is to impose at least the slightest bit of positive influence on people who see my work, or else, it means nothing [to me as an actor].”

Directed by Park Hee-gon of crime action movie “Insadong Scandal” (2009), “Fengshui” is set in the Joseon Dynasty (1392-1910). It depicts people who fight over the perfect spot to bury their ancestors, which they believe directly affects the flow of where authority is directed.

Cho plays the warm-hearted fengshui master Park Jae-sang, who loses his wife and a child after his attempt to interfere with the powerful Kim family’s plot to steal the propitious spot away from the royal family.

Veteran actor Baek Yoon-sik plays the powerful Kim Jwa-geun, the great-uncle of young King Heonjong (1827-49) while Kim Sung-kyun plays Kim’s ambitious son. Ji Sung takes on the role of Heonjong’s uncle Heungseon, who superficially joins hands with Jae-sang to interfere with the ever-expanding power of the Kim family yet with a scheme that diverges from the joint plan with Jae-sang. Moon Chae-won appears as a strong-willed gisaeng (female courtesan) with the plan to take revenge against the people that harmed her family during her childhood. 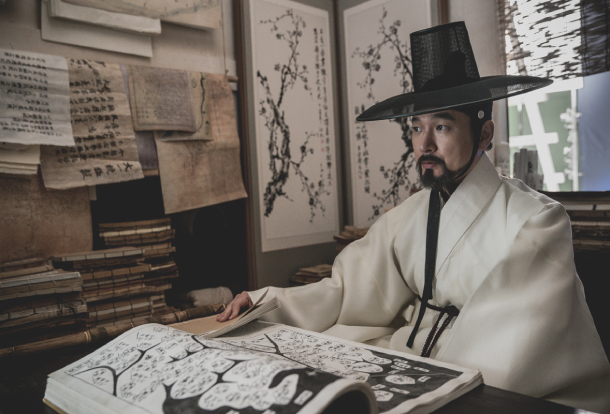 Cho Seung-woo plays a moral and warm-hearted genius Park Jae-sang in “Fengshui,” in which he co-stars with Ji Sung and Baek Yoon-sik.[MEGABOX PLUS M]

“While reading the script [of ‘Fengshui’], I felt like the movie was steady while being a classic period flick. It had a powerful [story] with grace,” said Cho. The actor’s trust in the director’s distinct artistic style, which was built through their collaboration in “Perfect Game” (2011), also made it easier for the star to accept the role.

Unlike the expressive roles he had played in his movies like crime drama “The War of Flower” (2006) and melodrama “Malaton” (2005), Cho plays a much more toned-down character in his latest film.

“It wasn’t an easy role because I had to maintain the balance between toning down and standing out too much, since [Jae-sang] is a calm lead character who carries out the development of the film. So keeping the balance was something that I discussed a lot with the director,” Cho added.

Although the movie is set in the past, Cho says the message of the film can still resonate with today’s audience.

“The fact that greed can lead to a bad outcome is a message that can still resonate in today’s society. People in the movie jump into the power struggle to acquire a more prestigious and affluent life, only to be met with unfortunate consequences. The movie touches on what people should value in life.”

“Fengshui” is the last film in production company Jupiter Film’s plan to release three period flicks. The first was “The Face Reader” (2013), directed by Han Jae-rim, and the second was “The Princess and the Matchmaker,” unveiled in February. While the 2013 release was a commercial hit, with 9.13 million tickets sold, the second film sold merely 1.34 million admissions.

“Fengshui” was released on Wednesday, and is competing against other ambitious films including a period flick “The Great Battle” and crime drama “The Negotiation.”