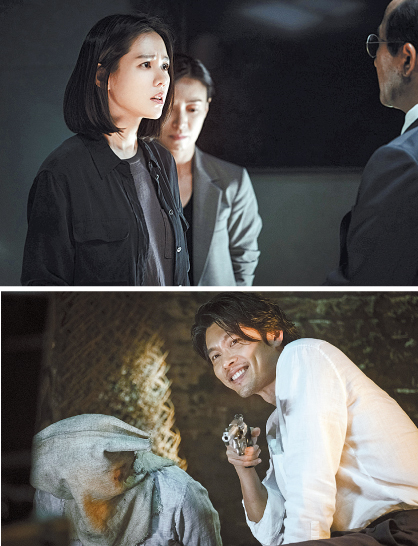 In crime flick “The Negotiation,” actors Son Ye-jin and Hyunbin smoothly pull off their roles as a police negotiator and a cold-blooded villain.

One of the most anticipated releases of the upcoming Chuseok holiday season, alongside several other ambitious projects like “The Great Battle” and “Monstrum,” “The Negotiation” is a gripping thriller with a modern touch.

The movie follows a suspenseful negotiation between Ha Chae-yoon (Son), a professional negotiator of the Seoul Metropolitan Police Agency, and an illegal arms dealer Min Tae-gu (Hyunbin), who holds a Korean police officer, a journalist and a few other Korean citizens as hostages in Bangkok.

Communicating through video calls on big screens, Tae-gu threatens to kill the hostages if he does not get what he wants - and he does not hesitate to do so. He physically abuses and kills the hostages without hesitation when the negotiator’s answers are not satisfying.

The negotiation, which lasts 12 straight hours, does not go smoothly, as Tae-gu does not reveal his true intention behind what he is doing, and instead, continuously demands to speak to seemingly unrelated people in front of the screen.

Coming from a rookie director Lee Jong-seok, the movie opens with a refreshing start to arouse curiosity. That freshness, however, is suddenly lost when the director aims for a big twist in the tale.

When Tae-gu’s intention behind holding hostages is revealed, the movie becomes no different from many other local films, in which weak people struggle to fight for justice against corrupt and seemingly impregnable authorities.

Irrespective of the way the story unfolds, the two main leads showcase powerful performances, which help to gloss over the plot’s weakness.

Son proves that she is not just a sweetheart, as seen in “A Moment to Remember” (2004) and “The Classic” (2003), but that she can be something more. And Hyunbin also successfully breaks away from his image as a prince charming to play a merciless villain, although his call for justice fails to completely separate the nice guy image that the actor has been holding on to.

Released on Wednesday, the movie runs for 114 minutes. It is rated 15 and above.