Moon and Kim visit summit of Mt. Paektu with wives

Moon and Kim visit summit of Mt. Paektu with wives 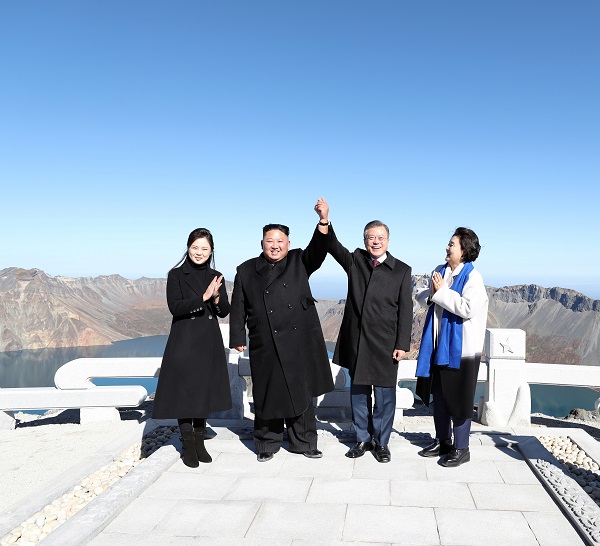 The leaders of the two Koreas and their wives ascended Mount Paektu on Thursday morning before South Korean President Moon Jae-in and his delegation return home after a three-day summit with North Korean leader Kim Jong-un.

Paektu is the highest mountain on the Korean Peninsula, and is an active volcano that straddles the China-North Korean border. It holds great cultural significance for both Koreas because it's considered the mythical birthplace of the Korean race.

In North Korean society, it's better known for something else – where founding father Kim Il Sung fought against Japanese colonial forces in the early 20th century, and where his son, Kim Jong-il, was born. That's at least what North Koreans are taught, though South Korean intelligence authorities believe Kim Jong-il, the father of North Korea's current leader, Kim Jong-un, was born someplace else.

Paektu is a key propaganda tool that highlights the god-like images of North Korea's ruling dynasty, a pillar of the personality cult surrounding the Kims.

The Blue House tried to distance itself from any controversy Moon could possibly face when he returns home later today.

Yoon Young-chan, Moon's senior secretary for public affairs, stressed Wednesday at the press center at Dongdaemun Design Plaza in eastern Seoul that Paektu was Korea's "spiritual mountain" and that Moon had consistently said he wished to reach the summit from North Korea's side one day. It appeared that Pyongyang took his wish into consideration when they suggested he and Kim Jong-un visit the mountain together, Yoon added.