Twice song to be played in Japanese drama

Twice song to be played in Japanese drama 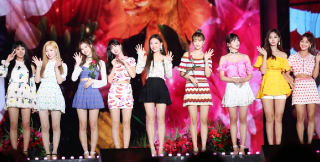 Girl group Twice’s new single “Stay By My Side,” which will be released in late October, was chosen to be featured on the soundtrack of the Japanese drama “The Illustrations of a Sorrowful Love at Night,” the group’s agency JYP Entertainment announced on Friday.

The drama, which is based on a manga series, will air on TV Asahi on Oct. 7. The story revolves around three female characters who tell stories of all the horrible relationships they have had in the past.

“Since the manga series was such a big hit with female readers in their twenties and thirties, we hope that the same people will be able to empathize with Twice’s song,” JYP added.

Twice is currently promoting their first Japanese album “BDZ,” which was released on Sept. 12. The album currently sits in first place on the Oricon weekly album charts. “Wake Me Up,” a song from the album, currently tops the LINE music weekly charts.