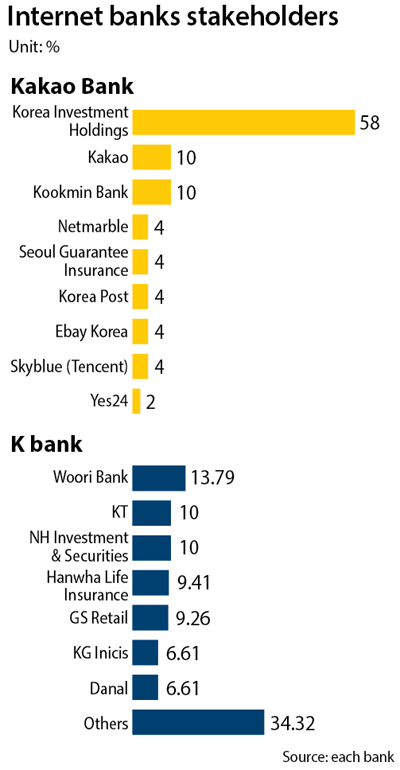 For the first time in more than three decades, regulations limiting nonfinancial companies’ holdings in banks have been relaxed.

On Thursday, lawmakers passed a long-delayed bill that allows nonbanking investors to raise their maximum stakes in online banks to 34 percent. Under current law, nonfinancial companies are limited to 10 percent stakes in any bank - including internet banks - and cannot exercise voting rights of more than 4 percent.

Additionally, the internet banks themselves will be prohibited from extending loans to conglomerates in general or their single largest shareholder that’s not a financial company.

The new regulations are expected to take effect early next year after the government announce their implementations.

The passing of the bill came 45 days after President Moon Jae-in personally implored the legislature to relax the decades old regulations to bring some kind of innovative change to the Korean financial industry.

When KT and Kakao were allowed to open up internet banks, there was a lot of hype about how they would disrupt the existing banking market by expanding choices for financial consumers. However, despite successful launches for K bank in April 2017 and Kakao Bank three months later, the banks have struggled with insufficient investments.

Both had to retract some loans products as a result.

The regulation was first adopted in 1982 to prevent conglomerates from using banks they invested in as their own piggy banks - taking out loans at low interest rates - or for illegal purposes such as bribery or embezzlement, putting the deposits of ordinary customers at risk.

The passing of the revised bill didn’t come easy. The bill was supposed to be put to a vote at 2 p.m. Thursday, but a debate continued among lawmakers. Ultimately, they voted at 9 p.m., 145 in favor, 46 against.

One of the biggest concern is the exception that allows a huge conglomerate to start an internet bank as long as it increases its ICT assets to 50 percent. That concern was mostly targeted at Samsung Electronics.

Financial Services Commission (FSC) Chairman Choi Jong-ku told lawmakers before the vote that there is no chance that a Samsung Bank will be created, which he affirmed on Friday during a press briefing.

But more internet banks are hoped for. The FSC chairman said it will be accepting applications for a new internet bank license between February and March and will give preliminary approval around April and May after undergoing a review.

“The revision of the law shouldn’t end at allowing the entry of one or two additional internet banks,” FSC Chairman Choi said. “Since the 1970s and 1980s the financial economic environment has gone through huge changes and we should have the opportunity for a true financial innovation that meets the changing of times,” he said.

Choi added that new internet banks will not only speed up innovation in the market but also provide the opportunity for the financial authority to review more of its current financial regulations.

Choi admitted that at this point no bank has officially made any hints about applying to open an internet bank.

“It seems they have been wary of making a decision due to the uncertainty [of the bill passing],” Choi said.