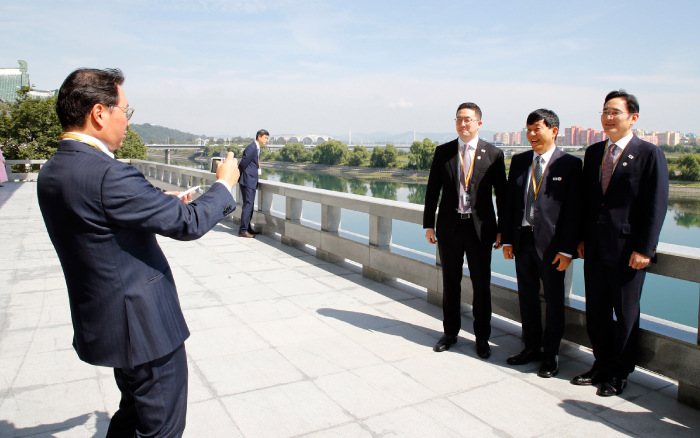 Given heavy international sanctions on Pyongyang, it might be too early to lay out any concrete business proposals in North Korea, but the business leaders who accompanied South Korean President Moon Jae-in to the North Korean capital remain optimistic about the market opportunities.

“I saw and listened to many things,” Chey Tae-won, the chairman of SK Group, South Korea’s third-largest conglomerate, said in Seoul on Thursday after returning from North Korea. “I saw tree nurseries and schools. … It could be a land of immense opportunities but also a blank sheet of paper. I will have to think about what to draw on it.”

Chey was one of several business leaders who accompanied South Korean President Moon Jae-in on a three-day trip to North Korea. In Pyongyang, they met with Ri Ryong-nam, North Korea’s deputy prime minister in charge of economic affairs, on the sidelines of Moon’s summit with North Korean leader Kim Jong-un.

The business titans looked tired but upbeat after returning from Pyongyang. Samsung Vice Chairman Lee Jae-yong dashed out of the parking lot with a smile on his face but did not make any comments about the trip. Hyun Jeong-eun, chairwoman of Hyundai Group, who has made several visits to North Korea before as part of her company’s projects in North Korea, conveyed her optimism in a written statement.

“Pyongyang, which I last visited seven years ago, has changed a lot,” Hyun’s statement read, “but it was a truly delightful moment to see the faces that I haven’t seen in a long time. There will be obstacles along the way, but I feel hope. As a pioneer in inter-Korean business, Hyundai Group will calmly push forward with cooperation.”

Park Yong-maan, chairman of the Korea Chamber of Commerce and Industry, said he went to North Korea hoping to observe as many things as possible.

“I examined the people, schools, tree nurseries and Mangyongdae Children’s Palace as well as science institute,” he told reporters upon his arrival in Seoul on Thursday. “This way, when the time comes, it will be easier” to do business in North Korea.

Choi Jeong-woo, chairman of Posco, expressed confidence in the prospects of inter-Korean exchange in a statement on Friday.

“I think we will be able to find good business opportunities,” Choi said, adding that inter-Korean business would be a big opportunity not only for Posco but the entire steel industry in South Korea.