Fresh off summit, Moon prepares for visit to N.Y.

Fresh off summit, Moon prepares for visit to N.Y. 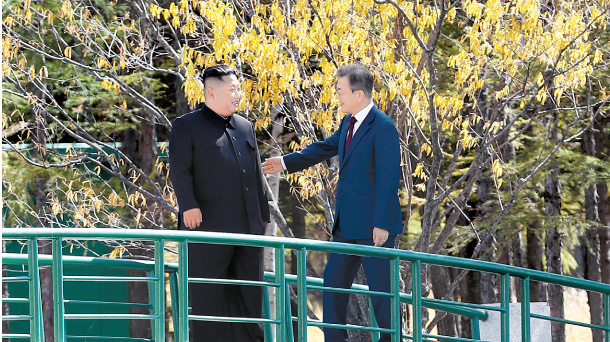 Just days after his Pyongyang trip, South Korean President Moon Jae-in will hold a summit with U.S. President Donald Trump on Monday on the sidelines of the UN General Assembly in New York to share undisclosed details of his talks with North Korean leader Kim Jong-un.

Moon heads for a five-day trip to the United States Sunday, overlapping with the Chusok holidays, and had no official schedule Friday following the three-day inter-Korean summit that concluded Thursday. He used Friday to prepare for his trip to New York.

Moon is expected to “share in detail” the results of his third inter-Korean summit with Trump, said Nam Gwan-pyo, the deputy director of the Blue House National Security Office, in a briefing Friday. They will also hold “in-depth discussions on practical measures to achieve a breakthrough in the North-U.S. dialogue for the denuclearization of the Korean Peninsula and advance inter-Korean and North-U.S. relations in a virtuous cycle.”

Moon will make an address to the 193-member General Assembly that day, which Nam said will focus on the outcomes of the most recent inter-Korean summit and the South Korean government’s vision for advancing the denuclearization of North Korea along with inter-Korean and North-U.S. relations.

The speech is significant because it will be Moon’s first policy speech since the inter-Korean Pyongyang Declaration of Sept. 19.

Nam said, “We plan to explain the outcome of the third inter-Korean summit, watched by the world, in detail and explain our government’s efforts to open a new era of peace and prosperity on the Korean Peninsula in close cooperation with the international community, and widen their understanding and support.”

This marked the third summit between Moon and North Korean leader Kim since their landmark first talks at the inter-Korean truce village of Panmujom on April 27, and the first visit by a South Korean president to Pyongyang in 11 years.

Moon spent a total of 54 hours in North Korea, from last Tuesday to Thursday, of which 17 hours was spent with leader Kim, the Blue House said.

North Korea offered Moon and his delegation to stay another day on the last day of the South Koreans’ visit, as they descended from Mount Paektu, according to Kim Eui-kyeom, the Blue House spokesman, on Friday.

A North Korean official offered to lodge the South Korean delegation of some 200 people, including cabinet members, lawmakers, CEOs and K-pop stars, another night, emptying out the Samjiyon Guesthouse near the mountain in Ryanggang Province, “just in case.”

“But because of our sides’ circumstances, we were not able to take up on that offer and had to return,” said Kim.

One particular circumstance was Moon’s planned trip to New York. Moon was expected to focus on his visit to New York and summit with Trump until he departed, with no other public activities scheduled.

Ahead of flying to Pyongyang last Tuesday, Moon had been asked by Trump to carry out the role of being “chief negotiator” between the United States and the North to invigorate denuclearization talks.

Moon said in an address to the nation about his summit with Kim in Seoul Thursday that North Korean leader Kim “expressed the hope of finishing complete denuclearization as soon as possible, and then focusing on economic development.”

To accelerate this process, Kim said he hoped U.S. Secretary of State Mike Pompeo would visit Pyongyang and that a second North -U.S. summit with President Trump would be held “as early as possible.”

Moon encouraged the United States to resume its dialogue with North Korea soon “while trying to understand the North’s commitment and position from its point of view.”

He added that the terms “observation” and “permanent” dismantlement of nuclear facilities used by the North in the Pyongyang Joint Declaration ultimately have the “same meaning as a verifiable and irreversible dismantlement.”