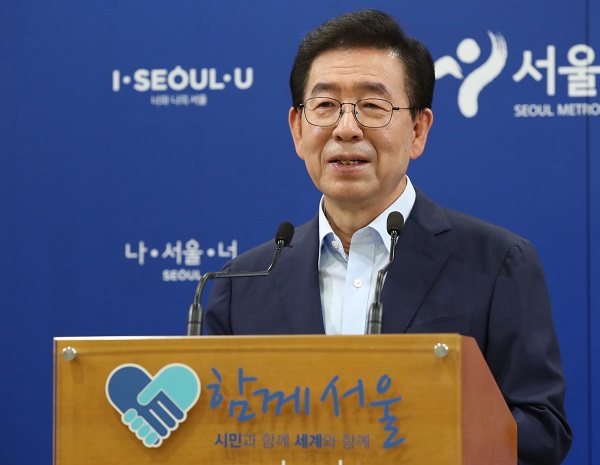 At a press briefing in Seoul City Hall on Friday, Seoul Mayor Park Won-soon announces a plan to bid for hosting 2032 Summer Olympics with North Korean capital of Pyongyang. [YONHAP]


Seoul mayor Park Won-soon wants his city to co-host the 2032 Summer Olympics with the North Korean capital of Pyongyang.

At a press conference at City Hall Friday, just hours after his return from the third inter-Korean summit in Pyongyang, Park vowed to dedicate his efforts to making that dream come true.

A joint statement signed by South Korean President Moon Jae-in and North Korean leader Kim Jong-un during their summit on Wednesday included an agreement to launch a joint bid to co-host the 2032 Summer Olympic Games.

Tokyo will host the Summer Olympics in 2020, followed by Paris in 2024 and Los Angeles in 2028. The 2032 Games will likely return to an Asian locale, Park said. A co-hosting bid by Seoul and Pyongyang holds enough symbolic value to sway the Olympic committee in 2025, when the host city for 2032 will be decided, he predicted.

“Joint hosting by Seoul and Pyongyang befits the Olympic spirit,” Park said, “and additional costs won’t be needed since Seoul renovated its sports infrastructure recently to host a nationwide athletic festival while Pyongyang already has a variety of necessary infrastructure.”
The recent PyeongChang Winter Olympics in February, which was hosted by South Korea, was used to start a détente between the two Koreas that led to summits between Moon and Kim in April and May as well as an unprecedented U.S.-North Korea summit between President Donald Trump and Kim at Singapore in June.

Moon’s trip to Pyongyang to hold a third summit with Kim last Tuesday to Thursday was meant to nudge denuclearization negotiations between the United States and North Korea along. The Olympic co-hosting bid is among several measures made between Moon and Kim to reinforce the rapprochement and lead to some kind of permanent peace on the peninsula.

Park, whose mayoral term ends in 2022, said he will begin preparations for the bidding process in collaboration with the central government. This includes ramping up exchanges with Pyongyang to improve that city’s infrastructure.

When he introduced himself to Kim Jong-un at a dinner banquet on Tuesday, the North Korean leader expressed his own concerns about the water quality of the Taedong River, which intersects Pyongyang, Park said.

The mayor replied by saying he would share the Seoul government’s experience with treating water in the Han River and rehabilitating the city’s water pipes with the North’s officials.

Also on Park’s list of responsibilities is preparing for a possible visit by Kim to Seoul within this year, another issue discussed by the two Korean leaders this week. The mayor said while the central government will take primary responsibility for the arrangements, the city will fulfill its role in addressing safety issues as well as organizing a reception comparable to the one they received in the North. He doubted, however, that Seoul would able to mobilize numbers similar to the 150,000 spectators present at a stadium where Moon delivered a speech following a group gymnastics demonstration.

The special entourage that joined Moon on his summit to Pyongyang included business and political leaders such as Park and Gangwon Governor Choi Moon-soon, both heads of regional governments in close proximity to the North.

During the summit, Park also met with Kim Yong-nam, the nominal head of state who serves as president of the Presidium of the Supreme People’s Assembly, to whom he presented a variety of proposals, including a pitch to co-host the National Sports Festival, an annual domestic sports competition, with Pyongyang next year. Another was to hold a conference where the heads of all 29 provinces of the two Koreas would gather and discuss a variety of cooperative projects.