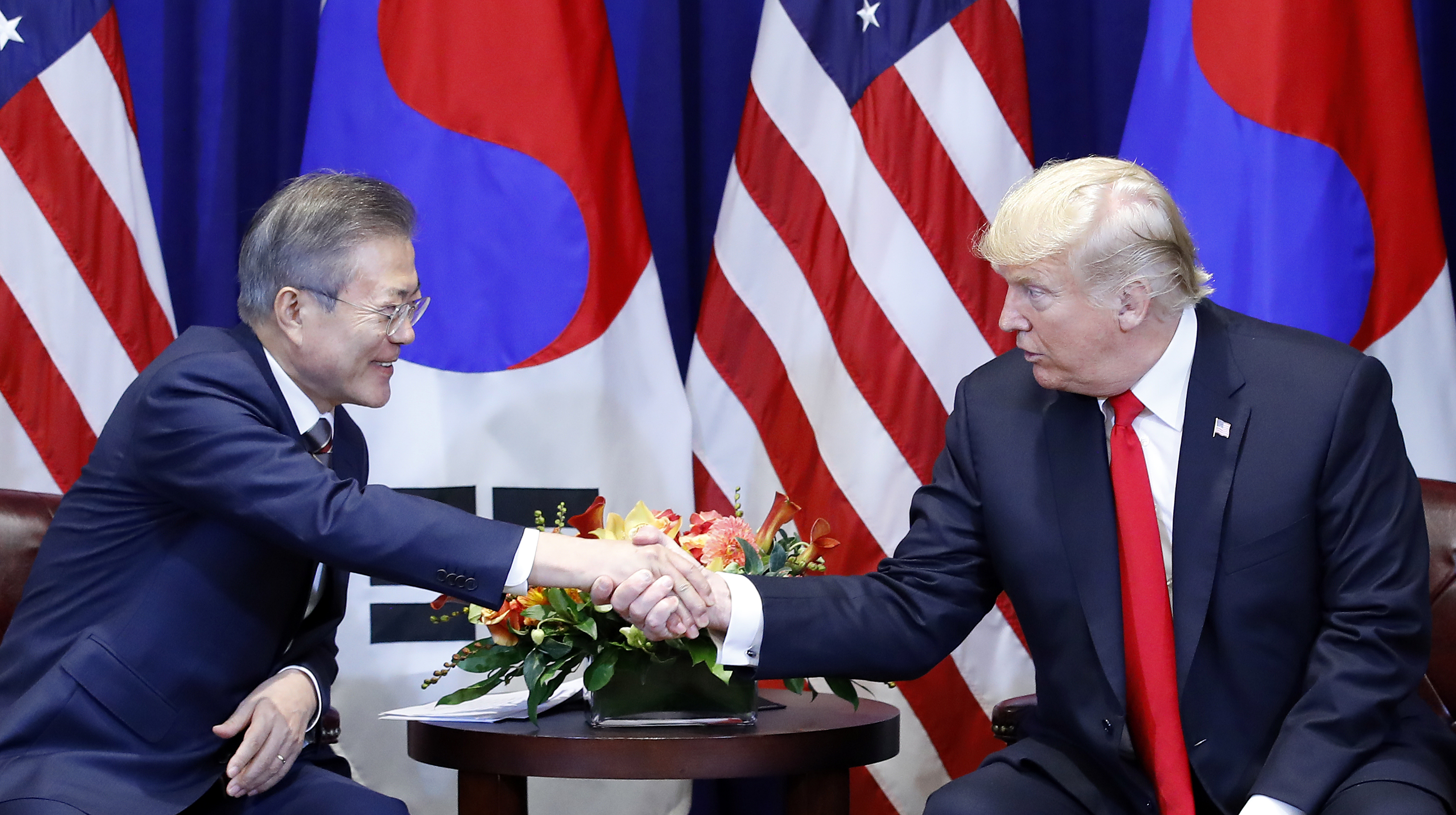 "The leaders agreed to continue communicating closely about corresponding measures," said Kim Eui-kyeom, a spokesman for the Blue House.

In their bilateral summit held in New York, the leaders of South Korea and the United States also agreed on the need to show North Korea a bright future following its denuclearization.

"The leaders agreed to seek ways to encourage North Korea's denuclearization process by showing a bright future it may enjoy once it reaches complete denuclearization," the spokesman said.

Still, the leaders noted the need to maintain international sanctions against the North for the time being, the spokesman added.

Korean leader Kim Jong-un that was largely aimed at breaking a deadlock in denuclearization talks between the U.S. and North Korea.

The U.S.-North Korea talks stalled after Trump called off a scheduled North Korea trip by U.S. Secretary of State Mike Pompeo, citing a lack of progress in the North's denuclearization process.

North Korea has been calling for corresponding measures by the U.S. to reward it for the denuclearization steps it has taken already.

In his meeting with Moon, the North Korean leader offered to dismantle the country's key nuclear facilities in Yongbyon should the U.S. take such measures.

Trump welcomed the outcome of the latest inter-Korean summit, saying he too will meet with the North Korean leader in the "not too distant future."

"We'll see what happens, but we will be having a second summit in the not too distant future," he said at the start of his bilateral summit with Moon.

Explaining the outcome of his Pyongyang summit, Moon said the North Korean leader wishes to hold a second U.S.-North Korea summit with Trump at an early date, and to conclude his country's denuclearization process swiftly as well.

"While repeatedly expressing his high expectations for President Trump, Chairman Kim expressed a hope to meet with President Trump at an early date to quickly conclude the denuclearization process," Moon told Trump.

Trump and Kim held the first-ever U.S.-North Korea summit in Singapore in June.

The U.S. president said the date for his second meeting with Kim will be announced soon, adding the meeting will likely be held in a place other than Singapore.

After the summit, the spokesman said Moon and Trump had in-depth discussions on the date and location of Trump's second meeting with Kim, possibly suggesting the leaders may be considering a three-way summit involving Moon.

The South Korean president earlier insisted a formal declaration of the Korean War may be a "corresponding measure" for the North, saying it may provide some security assurances to the impoverished nation.

Moon made his point clearer while meeting with the chief of the United Nations later.

"I was able to confirm Chairman Kim's firm commitment to complete denuclearization as a result of my North Korea trip this time," the president was quoted as telling U.N. Secretary-General Antonio Guterres.

"I believe one of the ways to promote the denuclearization process is to declare an end to the war," he said, according to Blue House vice spokeswoman Ko Min-jung.

The divided Koreas technically remain at war as the 1950-53 war ended only with an armistice, not a peace treaty.

Formally ending the war requires the United States' participation, but many fear the move may weaken the South Korea-U.S. alliance, along with the reason for the U.S. to maintain tens of thousands of troops in South Korea.

Moon has said it would only be a political declaration that has nothing to do with the alliance or the U.S. forces stationed in his country.

Moon has invited Kim to visit Seoul before the year's end. The North Korean leader accepted the invitation.

Moon earlier said he had a personal, undisclosed message from Kim for Trump.

The Blue House spokesman said the president's message was delivered to the U.S. president in Monday's meeting and that it included new suggestions or a proposal from the North Korean leader.

Moon earlier said the North Korean denuclearization process has been so highly publicized even in the North that it cannot be reversed.

"Chairman Kim has been really very open and terrific, frankly, and I think he wants to see something happen," he told Moon at the start of their meeting.

"They agreed to take joint efforts to develop the alliance into a greater alliance," the Blue House spokesman told a press briefing.