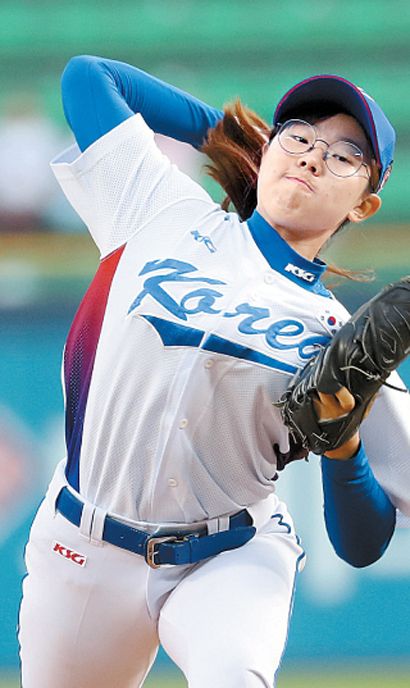 Most Koreans can easily name their favorite baseball or football team. The men’s leagues of the two most popular sports in the country are watched by thousands every day and stadiums are usually packed with fans cheering on the nation’s top athletes. But ask them to name a women’s baseball or football team and they may be hard-pressed to come up with an answer. 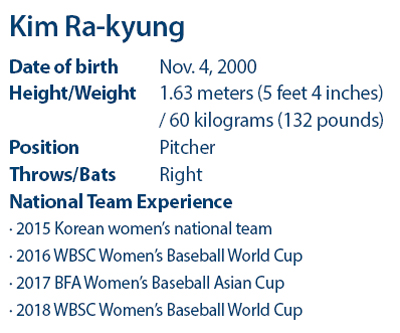 Of the 12 ranked women’s baseball teams in the World Baseball Softball Confederation (WBSC), Korea stands at seventh and doesn’t get much attention. But pitcher Kim Ra-kyung, 17, has made a name for herself by dominating the mound.

Kim’s brother, Kim Byeong-geun, is a former Hanwha Eagles pitcher, so it is no surprise that she got an early start to the sport. Only a year after she joined the national team to play at the 2016 WBSC Women’s Baseball World Cup in Gijang County, Busan, Kim led the team on the mound.

Kim continued to dominate at the 2018 WBSC Women’s Baseball World Cup in Florida, in August. During Korea’s opening round game against the Netherlands, Kim gave up just two unearned runs in three and two thirds of an inning to lead the team to a 9-8 win.

Although Korea failed to advance out of the opening round, finishing 10th with a record of two wins and six losses, Kim showed her prowess as the national team’s ace pitcher, tossing a fastball at a speed of 110 kilometers per hour (68 miles per hour).

Kim finished the 2018 WBSC Women’s World Cup with 1.00 ERA, picking up two wins and a loss over 14 innings. As a batter, Kim finished the tournament with a .333 batting average with one RBI and two runs.

Now that Kim has returned from the United States, she has put aside baseball and is focusing on her education. Rather than pursuing a career as a professional baseball player, Kim has set her sights on studying sports administration, hoping to improve Korea’s sporting infrastructure for those competing in unpopular sports.

The following are edited excerpts from Kim’s interview with Ilgan Sports, an affiliate of the Korea JoongAng Daily.

Q. You just competed at the World Cup for the second time. How do you feel?

A. I learned how [difficult] it is to compete in away tournaments. Adjusting to the time difference was the hardest thing because I had to adjust myself to the scheduled training time and game time. Once I returned [from the United States], it was even more difficult. I have to deal with the pressure of being a senior in high school, and, even more, the sense of disappointment that [the World Cup] finally over. I would have felt the same even if the team played well.

Hasn’t it been difficult to focus on studying and playing baseball at the same time?

Up until middle school, I played for the little league team but once I went to high school, I wasn’t given the proper environment to continue [baseball]. I had to figure it out myself. I looked for an indoor training facility and a group of friends that were preparing for the entrance examinations to study physical education. Since I also had to study, I did not sleep much. But I was still thankful to be able to continue what I like doing.

How much have you improved since the 2016 World Cup in Gijang?

At the Gijang tournament, my elbow wasn’t feeling too well so I couldn’t pitch the way I wanted to. During that event, I learned the importance of physical conditioning. I focused on strengthening my muscles and maintaining the speed of my pitches. I wasn’t able to exercise regularly so I tried to do it every day.

I think the biggest improvement in my game is my mentality. Once I started playing in bigger tournaments, I learned the importance of the mental game. Since baseball is a sport with so many possibilities in each game, I needed to become a good player by being able to perform my best in any situation. I made a list of things that I needed to improve on after each game and read it over right before a tournament. I’ve done that over the past two years and it allowed me to stay calm at the World Cup.

After the World Cup in Gijang, did women’s baseball become more popular?

It’s a topic I try to be careful about. [After the 2016 World Cup], we did receive a lot more attention from fans but it was temporary. This may also be because the women’s team is not good enough to compete at the international level. This makes me really sad sometimes because the women’s baseball team has players that are younger than me now. At this year’s World Cup, I wasn’t the youngest player on the team for the first time. It makes me feel even sadder when I start thinking these players will have to go through the same thing I did.

Through playing baseball, I got to experience and see facilities and the conditions of the sport in other countries. Because of this World Cup, I am even more motivated to pursue a career in this field. Right now, I’m just a student. If I get a chance to study, I want to research the problems that the Korean sporting community faces and help improve it.

How do you feel about the expansion of baseball in Korea?

I don’t think it’s right for me, a high school student, to talk about the development of baseball [in Korea]. I just hope that more people can play baseball if they want to. This also applies to professional players who have lost their spot in the KBO. I wish there were more opportunities for people to play baseball.