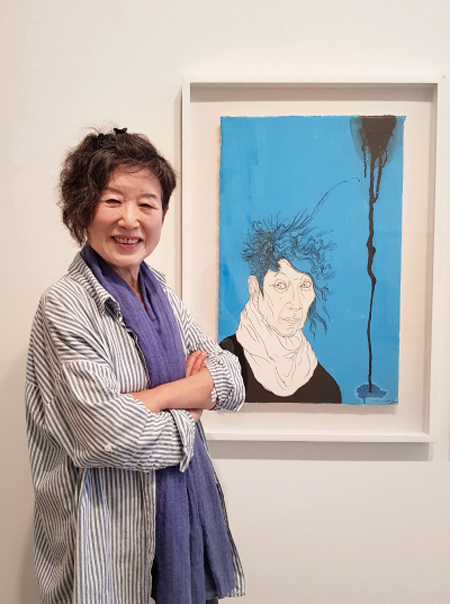 Yun Suknam, 79, is often dubbed “the godmother of Korean feminist art.” Ever since her first solo show in 1982, themes like “motherly love,” “feminism” and “life” have been present in her work. Yun would often depict her own mother, Korean female artists and writers forgotten in history and abandoned dogs with blank faces, through a colored wooden sculpture or painting. The artist, who has drawn everything but herself, has finally decided to make an exhibition about her.

“I started drawing when I was forty. I was always embarrassed about revealing myself to the world which was why I hid behind my mom’s story,” admitted Yun. At the ripe age of 79, Yun has finally decided to look deep within her.

Yun was the third of six siblings. She dreamt about being a painter until her father passed away when she was 15 years old. After graduating from Sungkyunkwan University majoring in English Literature, Yun was hired as a typist for a company where she was employed for about eight years. After getting married she quit her job and became an ordinary house wife. While one may think that the life of a housewife and mother in a relatively well-off middle class household would be without worries, Yun admits that there was more than one occasion when anxiety would suddenly grip her. “This can’t be the only way I live my life,” she thought to herself. She first picked up a paintbrush when she was forty.

Yun said that her mother and mother-in-law were her muses. In 1983, when she travelled to New York to study art, she was surprised at the fact that art was not just confined to being hung on a wall. This was when she started to pick up chunks of wood and painting them with different colors.

Yun first received acclaim with the art exhibition “October Gathering” which she worked on with artists Kim In-soon and Kim Djinsuk in 1985. The untitled works depicting portraits of an old person’s face or hands was first noticed as a piece of minjung art (a Korean political and populist art movement that developed in the 1980s). She became a pioneering feminist artist as she drew realistic depictions of female laborers and depicted inequality that women faced in a patriarchal society.

“Me, a feminism artist? [Back then], I was not. When I participated in my first art exhibition in 1979, the words like “feminist aesthetics” and “feminism” were all so new. [I started painting realistic depictions of women] in order to survive as a female artist,” Yun said. “That was when I met up with groups for the women’s movement. I finally understood why I was so persistent in [drawing the way I did]. What they studied was what I experienced every day. Ever since, I started contemplating why I hold such a belief by studying Western feminism.”

In her forty-year career, Yun has been featured in 23 solo art exhibitions and participating in 177 group art exhibitions. She was the first female artist to receive the Lee Jung-seop Artist award in 1996, and she participated in the Venice Biennale in 1996 and in the Gwangju Biennale in 2014.

The variations of Yun Suknam’s “We are a matrilineal family”(2018), based on her family photo, into an installation of sculptures, left, and two paintings of traditional color pigments on hanjj, middle and right. All of them are on view at Hakgojae Gallery in central Seoul. [MOON SO-YOUNG, HAKGOJAE]

Yun was also chosen as the Korean representative to have her self-portrait displayed in the Smithsonian Museum in Washington, D.C. in November as a part of their “Portraits of the World” exhibition.

Her 24th solo exhibition, which is being held in the Hakgojae Gallery through Oct. 14, exhibits colored hanji (a traditional handmade paper from Korea) which is used in a total of 14 pieces of art that range from paintings, sculptures and installation art.

Yun has been studying the colors and patterns of minhwa, often referred to as traditional Korean folk art, since 2015. She took the traditional patterns and colors of the minhwa and interpreted them in her own style. “I discovered something new in minhwa. [I was left in awe] at how, even though the minhwa used primary colors, it sill managed to look vivacious instead of plain. All the while, there was a certain sharp sadness that seeped deep into contrasting colors.”

Once one enters the first floor of the exhibit, eight pictures of Yun Suknam - four drawings, two paintings and two partially colored paintings - greet them. All have a piercing gaze. Yun started drawing self portraits after seeing 17th-century painter Yun Du-seo’s self portrait at a National Museum of Korea show in 2011. She started practicing self-portraits of her own after wondering how it was possible to accurately capture the glare of the subject, as was seen in Yun Du-seo’s works. 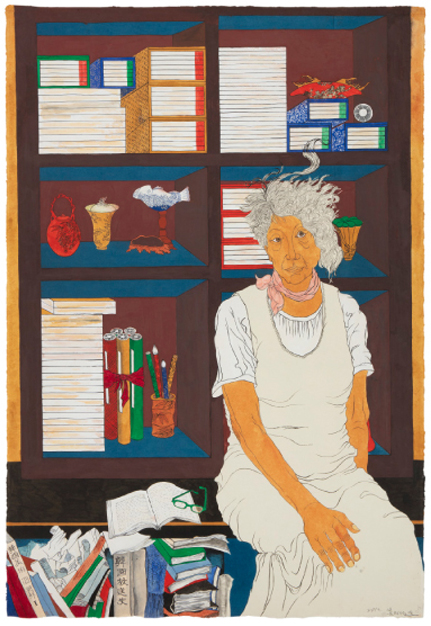 Q. For the very first time in your career all the themes seem to revolve around you. What kind of message did you want to communicate by doing so?

A. I naturally started to want to experiment with portraits after studying minhwa for about three years. I wanted to at least attempt to mimic Yun Du-seo’s self portrait. However, there wasn’t anyone willing to stand as a model for my portrait which was why I started drawing self-portraits. I looked into the mirror everyday [for reference] and whilst doing so I started wondering about what kind of person I am. I realized how stubborn I am. I guess that’s why I am still a painter at such an old age. However, I made a promise to myself that I was going to keep painting until there wasn’t enough strength left in me to do so.

It was interesting how you created both an installation of colored sculptures and a painting which depicts you with your mother, sisters and even a female dog under the title “We Are a Matrilineal Family.” Would you say that you’re inspired by your mother?

My mother is the person I adore and respect the most. She was the kind of woman who would give food to a passing beggar even though she was starving as well. In that sense, I am so proud of her.

The blue curtains that are behind the installation and red pieces of wood scattered along the floor represent the sky and the ground. This installation was inspired by the extravagant, yet deep colors of the minhwa.

The spectacular installation “Pink Room V” where the whole room is pink is quite impressive. Can you explain the process of putting it together?

Even though creating it was a tiresome process, I did not use any professional helpers. Only the paper, which was plastered on the wall after being cut into small squares, was done with the help of my daughter. We cut the pieces of paper with a knife ourselves.