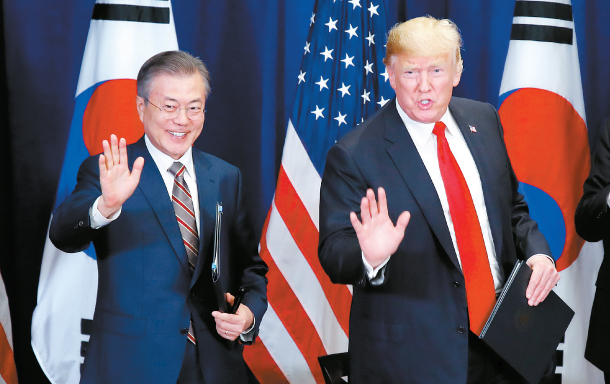 “With the swift conclusion of the negotiations for the revision, uncertainty surrounding our FTA has been eliminated,” said Moon after the signing ceremony. “As a result, companies from both countries will now be able to do business under more stable conditions.”

Under the revised pact, the United States will be allowed to continue imposing a 25 percent tariff on Korean trucks until 2041, a 20-year extension from the original pact. Tariffs on exports of regular vehicles are 2.5 percent. The cap on the number of American vehicles using U.S. safety standards without further modifications that can be shipped to Korea per year will double to 50,000 per manufacturer.

But the increased cap won’t likely hit Korea hard. In a briefing after the signing ceremony, Korean Trade Minister Kim Hyung-chong noted that U.S. automakers have never sold more than 10,000 cars a year in Korea. The maximum number Ford sold was 8,100, followed by GM’s 6,700 and Chrysler’s 4,800. The revised pact will exclude Korea from steel tariffs in exchange for capping its exports to the United States at 70 percent of average exports from 2015 to 2017. Korea will still face aluminum tariffs.

“The revised pact did not include further opening up of the agricultural and stockbreeding market, which many industry insiders in Korea had been concerned about, as well as mandatory use of made-in-U.S. auto components by Korean carmakers,” said Trade Minister Kim. “Placing a red line on issues sensitive to Korea is something that is worth positive appreciation.”

The Korea International Trade association (KITA), a business lobbying group, raised concerns over the still-lingering possibility that the United States will cite Section 232 of the Trade Expansion Act to impose unlimited tariffs on Korean automobiles under the pretext of defending national security. Trump has continually threatened to impose a 25 percent tariff on all cars exported to the United States.

As urgent as the issue is, Hyundai Motor Executive Vice Chairman Chung Eui-sun missed the chance to be part of a business delegation that joined President Moon on a trip to North Korea and then flew to the United States on Sept. 16 to meet with Commerce Secretary Wilbur Ross and other business and political leaders to discuss ways to avoid tariffs. If a 25 percent tariff is levied on all Hyundai Motor vehicles shipped to the United States, the largest carmaker in Korea could face up to 3.5 trillion won ($3.1 billion) worth of new tariffs.

“The Korean government is hoped to concentrate its capacity on the efforts to fend off the tariff threat,” said the KITA.

The initial Korea-U.S. FTA was negotiated in 2007 and went into effect in 2012. The revised pact is set to take effect on Jan. 1 next year. The Korean government is poised to submit a proposal for ratification to the National Assembly early next month. On Wednesday, Korea’s ruling Democratic Party called on opposition parties to promptly start a parliamentary process for ratification.

The agreement does not require congressional approval to take effect in the United States.

The United States is Korea’s second-largest export market, with a 12 percent share, after China’s 25 percent.