LG U+ adds Google Assistant to its IPTV

LG U+ adds Google Assistant to its IPTV 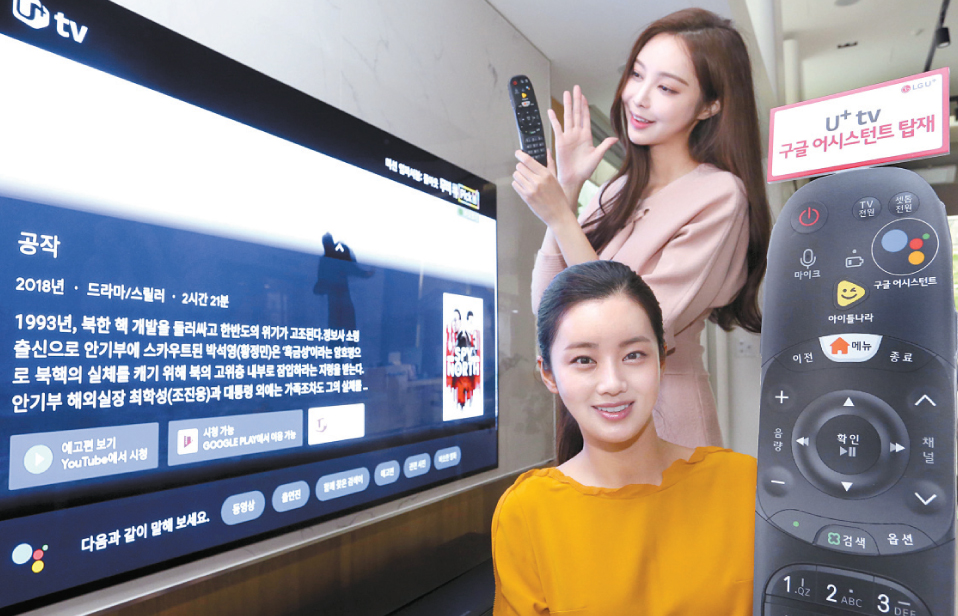 Unlike its telecom service competitors SK Telecom and KT, LG U+, the smallest of the three, is taking a two-track strategy when it comes to voice commands for its internet protocol TV (IPTV) service.

LG U+ said on Wednesday that it will enable its customers to use Google Assistant for its IPTV set-top box. Subscribers to LG U+ IPTV service can use Google’s AI voice assistant to watch YouTube on TV, launch the Google Photos app as well as use translate and search features with a remote control specifically devoted to Google Assistant.

Searching for videos on YouTube and viewing photos on smart TVs is hardly new for owners of the latest smart TVs, but using a remote control for real-time translation on a TV is a unique feature.

“We plan to continue expanding the fields of cooperation with Google that began in 2012,” said Won Kang-hoon, leader of the IPTV partnership service team at LG U+.

LG U+, an affiliate of LG Electronics, already joined forces with top domestic search engine and portal operator Naver last December to let its customers use Naver’s Clova AI platform for its cable TV service. The telecom operator even tied Clova Friends, an AI speaker, with its subscription services as part of a joint promotion.

LG U+ IPTV subscribers, who total around 2 million, can use both Clova and Google Assistant. But the telecom has yet to decide whether to link the Google Home AI speaker with its IPTV service.

SK Telecom and KT, the two largest telecom operators in Korea, have been building their own AI voice command platform. The former has Nugu and the latter has Giga Genie. Other tech firms, such as Samsung Electronics and Naver, have theirs as well. LG U+’s affiliate LG Electronics has its own ThinQ platform, but as of now it only works with home appliances and smartphones.