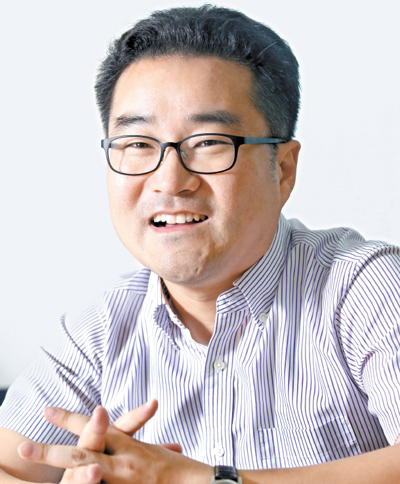 Ban Ho-young, CEO of Neofect, discusses his vision and strategy at the company headquarters in Yongin, Gyeonggi.[PARK SANG-MOON]


Neofect’s best known product, the Rapael Smart Glove, now has a more glamorous moniker. It’s being called the “Moon Jae-in glove” after the president tried on the wearable training accessory at an event two months ago.

Ban Ho-young, CEO of the Gyeonggi-based company, doesn’t care to be thought of as leader of a hip new start-up taking advantage of sudden media exposure. He has more serious ambitions: to have a lasting impact on medical technology.

The former Samsung Electronics worker walked away from a coveted job in 2007 to pursue a more personal mission: helping people with brain and nervous system disorders get better. He was inspired by his father and uncle, both of whom suffered strokes.

The start-up began with the Smart Glove, a rehabilitation device well suited to stroke victims. Newer devices help people with dementia and paralysis. The company will take a major step up by going public on the country’s junior bourse, the Kosdaq, this year.

The Korea JoongAng Daily sat down with Ban to discuss his vision of the future direction of Neofect. 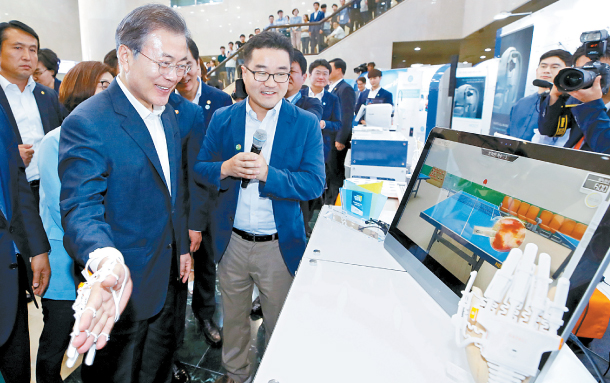 
Q. What brought you to found Neofect?

A. I started the business because I wanted to see more people having rehabilitation training at affordable prices. My father and uncle who suffered from strokes led me to become more attached to the mission. This personal reason also allowed me to be more conscious about the needs of stroke patients. The rehabilitative process typically requires monotonous repetition, but my co-founder suggested that the training sessions be more entertaining and done at cheaper costs, which prompted me to join the project.

What kind of jobs did you have before you established Neofect?

Before running my own business, I worked in the visual display division at Samsung Electronics between 2003 and 2007. After quitting, I founded a start-up that provides an IPTV business, which didn’t go well. My next destination was an MBA course at the University of Virginia, followed by the launch of Neofect.

What was the first product at Neofect and how was it received?

Our very first product was the Rapael Smart Glove in 2014. The Smart Glove was well received at home and abroad because rehab tools specifically dealing with hand movement were few and far between at that time. The Rapael Smart Glove was designed to help people with central nervous system diseases carry out rehab exercise for fingers, hands and arms. Rapael is also designed to activate visual and auditory sensory systems, which in turn enhances cognition and brain plasticity. The product has been sold to around 50 hospitals in Korea including Asan Medical Center, Severance Hospital, Seoul National University Hospital and National Rehabilitation Center. In the United States, well-known centers like the Rehabilitation Institute of Chicago partnered with us to take Rapael to their institute. The Department of Veteran Affairs, for instance, subsidizes veterans if they use the Smart Glove. 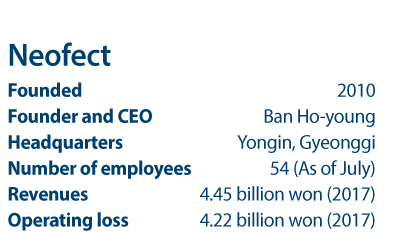 There are different types of rehab robotics and technologies. What led you to develop the Rapael Smart Glove?

There are different kinds of robots and devices designed to facilitate the rehabilitation process out there. Many of them tend to be mechanically complex, costly, heavy and large. I wanted to develop something portable and easy to use, a motivation that led me to develop Rapael. Some rehab robots come with hefty price tags of hundreds of millions of won. Engineers prioritize the technological aspect while consumers put affordability first. The term “appropriate technology” begs the question of the relevance of high technology. I thought we needed to put more emphasis on problem-solving than just relentlessly pursing more advanced technology. Neofect took a distinctive approach to rehabilitation by embracing simpler and cheaper devices while our competitors work on making big equipment.

Neofect has received recognition around the world. It received Innovation Awards at the Consumer Electronics Show (CES) in Las Vegas and CNN put it on its 14 coolest technologies list. How did you manage that?

Some consider the CES as an event for a select few early adopters. Rarely is a product shown there with the ability to actually help people. On the other hand, foreign media including CNN noted that Neofect’s products can fulfill the needs of consumers. I think a distinctive look is another factor.

Is there any difficulty in running a business in the medical rehabilitation field?

The medical device business is entangled with different interested parties compared to other products. Take a smartphone. If a consumer likes the phone, one can go and get it. But in the medical technology, there is always someone who decides which product can be sold. As for payment, insurance companies are involved. So, it is tough for a new technology to take off in the medical sector. 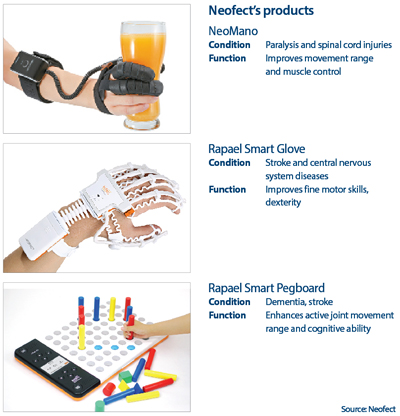 Have you ever regretted starting your own business?

Honestly, I have. Still, I really enjoy it. Working at a big company would have its own merit, but I feel really rewarded when I actually create new things, design and manufacture them and bring them to market. I am happy to see people benefit from our products. The best moment is when I get emails from customers appreciating our effort to make the products. A customer living in California said that the Rapael glove is like an angel to his family as they see the hands’ motor ability improve. I think my work translates into reviving someone, an aspect that I consider very meaningful.

Neofect also operates outside of Korea. Can you outline your overseas business and operations in Korea?

In the United States, we sell or rent products to individual clients as well as hospitals and institutions. A patient can take a Rapael Smart Glove home if he or she pays $99 a month. We also opened a branch in Germany. As for Japan, Neofect partnered with Nihon Kohden, Japan’s major manufacturer and distributor of medical electronic equipment, to sell our products. I found the Japanese group is meticulous about quality and has expertise in sales and marketing.

In Korea, we mainly deal with corporate clients because the Ministry of Food and Drug Safety has yet to approve a rental service for patients. But we let anyone come to a free trial center here at Dankook University to experience all the products in our lineup.

Most Korean startups focus on the domestic market, but Neofect appears to be keen on expanding overseas. What is your proportion of sales at home and abroad?

About 50 percent of revenues come from Korea and the rest from other countries. For overseas, the U.S. takes up the vast majority of sales. We have a German branch, but it is at an early stage. Since the domestic market has been limited, we targeted different countries from the beginning.

Besides the Rapael Smart Glove, Neofect has released diverse items. Can you explain more?

So far, we have a total of six products: the Rapael Smart Glove, Smart Pegboard, Smart Board, Smart Kids, ComCog and NeoMano. The Smart Board and Pegboard are specifically designed to facilitate upper limb training for stroke patients and people suffering from neurological or musculoskeletal diseases. The Smart Kids product is a kids’ version of the Rapael Smart Glove. It is significant because there are not many rehab tools designed for children. ComCog is made to help enhance cognitive ability for people with dementia and other neurological disorders. The latest product is NeoMano, a robot glove designed to improve movement range and muscle control such as hand grip. It hasn’t been released, but already has gotten a lot of attention. It is a so-called soft robotics made from soft, elastic materials, which is different from conventional rigid robots.

The medical device business is heavily affected by government regulations. How do you assess the Moon Jae-in administration’s stance on regulation in the medical sector?

I think the current administration is willing to help us navigate procedures required to pass different regulations. The government introduced an official at the Ministry of SMEs and Startups who can give advice on an ongoing screening process to sell the Smart Glove on the retail market. I had the chance to meet the president in July when he attended an event aimed at promoting innovative medical technology in Seoul National University Bundang Hospital in Gyeonggi. The president gave a positive review of our products.

I think I need to be cautious in stating specific numbers, because the year has not ended. One thing that is clear is that our sales have been on the rise. Last year, we recorded 4.45 billion won ($4 million).

A group of investors has made 13 billion won worth of investment. It was not in a consortium form but separate investment companies including DSC Investment, Company K Partners and SBI Investment Korea. We are also planning an initial public offering on the Kosdaq to manage a better capital flow and compete with other manufacturers in the U.S.