[Test drive] Veteran Accord gets a new lease on life

[Test drive] Veteran Accord gets a new lease on life 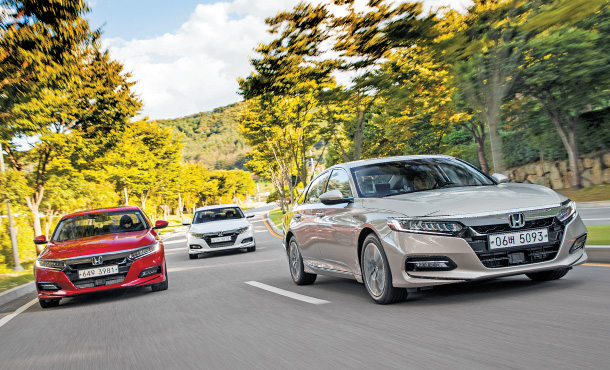 GWANGJU, Gyeonggi - The Accord has been one of Honda’s best selling models for 42 years. In May, the 10th generation Accord was released to the Korean market in four versions, two with gasoline engines and two hybrids.

This reporter had the chance to try three versions - the 2.0-liter turbocharged Accord Turbo Sport, the 1.5-liter Accord Turbo and the Accord Hybrid Touring, the higher-end hybrid - on a 100 kilometer (62 mile) test drive around the Konjiam Resort in Gyeonggi on Sept. 11.

The new Accords are sleeker than their predecessors, giving them a sportier and younger air. Honda lowered the overall height of the sedan by 15 millimeters while extending the car’s width by 10 millimeters and wheelbase 55 millimeters.

The extended wheelbase offers greater space within the car. There was plenty of leg room, even in the back seat.

The most exciting change came with the Honda Sensing technology that makes the new Accords smarter and safer. Honda Sensing, a package of driver assistance programs using sensors and cameras, is being offered in some Accords for the first time, according to the automaker. It is offered on the Accord Turbo Sport and Accord Hybrid Touring, but not the Accord Turbo.

This reporter enjoyed the driver assistance most when driving the powerful 2.0 Turbo gasoline trim. Some confidence was necessary to try the Honda Sensing technology at rapid speed on a highway. 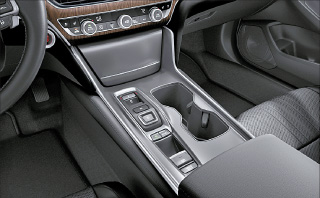 The interior console of Honda’s Accord [HONDA KOREA]

One notable feature is the adaptive cruise control. The system automatically controls the speed of the car to keep pace with a car in front when the cruise control is on.

When this reporter set the maximum speed at 100 kilometers per hour (62 miles per hour) on a highway near Konjiam, the adaptive cruise control kept the car following a car ahead of us at around 100 km/h speeds. When the car in front slowed down due to traffic, the Accord slowed down as well.

The lane keeping assist system was useful as well. It can feel a bit humiliating to have the steering wheel keep bouncing in your hands as the technology forces the car into the center of the lane. But that probably also means the technology saved the reporter from a crash.

Lane watch was a new feature on the Accord. After activating the turn signal for a right turn, a camera installed in the car’s right side mirror showed blind spots on a display inside the car. That helped me avoid unseen obstacles while taking a right turn.

Sato Noriyuki, the Accord assistant large project leader at Honda R&D, said the company focused on lane keeping technology after finding out that most car accidents occur on turns or lane changes.

The Accord Turbo doesn’t come with the feature, but a Honda spokesperson said there are still some drivers looking for simpler cars without too much technology. They are experienced drivers who don’t want to be disturbed by alerts while driving.

In terms of driving performance, the Accord Turbo Sport deserved its “sport” label. Compared to the 1.5-liter gasoline or smoother hybrid model, this reporter could feel a powerful push and sound when speeding up. This also means the car was quite noisy. The car comes with a 10-speed automatic transmission, which enables it to adjust speeds quickly in various driving scenarios. The model boasts maximum 256 horsepower and 37.7 kilogram-meter torque.

The Accord Hybrid gave a sportier driving experience than expected. The EV mode was obviously quiet and smooth but as the reporter changed to sport mode, the hybrid sped up with power. It is powered by a petrol engine, two electric motors - one used for power generation and the other for driving - and a lithium-ion battery for total system output of 215 horsepower.