Moon tells Fox U.S. has ‘nothing to lose’ from talks

Moon tells Fox U.S. has ‘nothing to lose’ from talks 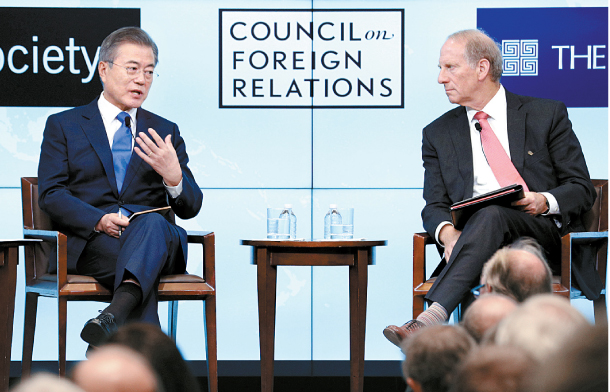 Korean President Moon Jae-in, left, speaks before U.S. foreign policy and North Korea experts at an event co-hosted by the Council on Foreign Relations on Tuesday in New York. [YONHAP]

“Even if sanctions were eased, we could simply strengthen them if the North tricks us,” he told Fox News. “For these reasons, I say that the United States has nothing to lose if President Trump and Chairman Kim Jong-un [of North Korea] continue dialogue based on a level of trust after singing on to a broad promise for denuclearization.”

Moon’s remarks appeared aimed at placating North Korea hawks in the United States, who harbor suspicions that Washington might have been manipulated by false denuclearization promises from Pyongyang.

Many worry that President Trump gave away too much to Kim by meeting him in first place on June 12 in Singapore before the young North Korean leader took concrete denuclearization measures.

Moon also proposed an exchange of economic observers by both sides as a possible corresponding measure.

In another address delivered Tuesday before U.S. foreign policy and North Korea experts at an event co-hosted by the New York-based Council on Foreign Relations, Moon said that an end to the Korean War should be declared to move toward a “peace regime” in the region and “accelerate the North’s denuclearization.”

Moon also dismissed concerns that an end to the war could change the status of U.S. troops in South Korea and the UN Command.

“An end-of-war declaration is a political statement en route to signing a peace treaty. Until the peace treaty is signed, an armistice will be maintained,” he stressed.

“North Korean leader Kim also agrees with this concept [of the U.S. forces in South Korea],” he said.

Moon also conveyed to the audience some of what the North Korean leader said to him during Moon’s three-day stay in Pyongyang last week.

Moon quoted Kim as saying that he was “very well aware of international community’s suspicions that North Korea was only doing a trick or simply buying time in spite of the many steps for denuclearization that it has taken so far.”