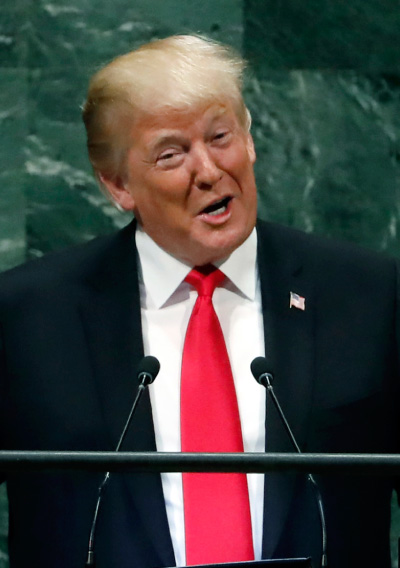 U.S. President Donald Trump lauded North Korean leader Kim Jong-un on Tuesday for “his courage and for the steps he has taken” in easing tensions and improving relations with his administration over the past few months, marking a dramatic shift from his address a year ago in which he called Kim a “rocket man” on a “suicide mission.”

Speaking at the UN General Assembly in New York, Trump remarked, “I would like to thank Chairman Kim for his courage and for the steps he has taken, though much work remains to be done.”

Though Trump said sanctions will remain until denuclearization happens, his friendly remarks about the young North Korean leader are a dramatic about-face from the address delivered at the UN General Assembly last year. “Rocket man is on a suicide mission for himself and for his regime,” Trump said at the time when the two leaders appeared to be marching toward a full-fledged conflict on the Korean Peninsula.

In a direct warning, the real estate mogul-turned-president said he would have “no choice but to totally destroy North Korea” if the latter continued provocations and the U.S. felt “forced to defend itself or its allies,” referring to South Korea and Japan.

But since that address last September, many diplomatic breakthroughs have taken place, including the summit meeting of a U.S. president and a North Korean leader, as well as three inter-Korean summits, two of which were held in the border village of Panmunjom and one in Pyongyang just last week.

Reflecting on the fast-changing diplomacy revolving around North Korea, Trump said Tuesday his approach with the North “has always yielded incredible change” and that he and his allies have “engaged with North Korea to replace the specter of conflict with a bold and new push for peace.”

At his June 12 summit with Kim, he said they had “productive conversations and meetings.”

Then he divulged into laying out his North Korea policy achievements that he said only a few “could have imagined” before: “The missiles and rockets are no longer flying in every direction. Nuclear testing has stopped. Some military facilities are already being dismantled. Our hostages have been released. And as promised, the remains of our fallen heroes are being returned home, to lay at rest in American soil.”

As if to demonstrate the heightened status of the Kim Jong-un regime on the global stage, North Korean Foreign Minister Ri Yong-ho was escorted out of John F. Kennedy International Airport by a limousine that had been awaiting his arrival on the tarmac on Tuesday, a level of protocol that matches the highest-level officials.