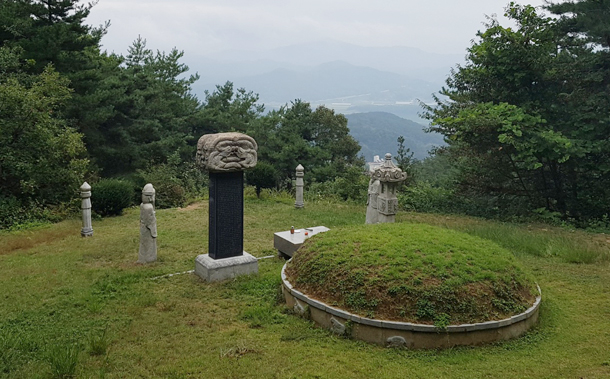 North Korean leader Kim Jong-un plans to visit the South within the year, and public interest is growing over whether he will visit the tomb of his clan’s founder, which sits on a picturesque mountain in Korea’s southwest.

At the third summit between Kim and South Korean President Moon Jae-in last week, the North’s leader reportedly promised to make a trip to the South within the year. It is likely that his visit will center on highly symbolic locations, and rumors abound that he may honor his family’s heritage by visiting the tomb of his forefather in Jeonju, North Jeolla.

Kim Jong-un belongs to the Jeonju Kim clan and is a 34th-generation descendant of Kim Tae-seo, a powerful 13th-century courtier of the Goryeo Dynasty. His tomb was discovered in the 1970s on Mount Moak in Jeonju. The tomb sits on the side of the mountain, which overlooks the wide and flat plains of Jeonju and nearby Wanju. Next to it sits a large reservoir that feeds the crops of this fertile region.

Son Seok-u, a renowned South Korean geomancer and feng shui expert who chose the site of former President Kim Dae-jung’s burial site, famously called Kim Tae-seo’s tomb site highly propitious in a 1993 book. Son said it provided the ki - or energy - that allowed Kim Il Sung, Kim Jong-un’s grandfather, to reign as North Korea’s leader for 45 years. He added, however, that the land’s ki was nearly depleted and that Kim Il Sung would die within a year.

The prediction came true in July 1994, when Kim Il Sung, who ruled the North since its founding in September 1948, died from a sudden heart attack at 82. Son’s book made headlines in the South for his prediction.

According to “With the Century,” Kim Il Sung’s memoirs, his direct ancestors moved from Jeonju to Pyongyang in the 17th century. Kim told Korean-American journalist Julie Moon that his ancestors were buried on Mount Moak during an interview with her three months before his death in April 1994.

This was confirmed by his son and successor Kim Jong-il, when he met former South Korean President Kim Dae-jung, who was also from the same region, at the first inter-Korean summit in June 2000.

According to Jang Young-bae, the former head of the Jeonju branch of the South Korean broadcaster MBC, who also attended the summit, Kim Jong-il said his father would definitely have visited the tomb had he been able to, and that he too would do so if he ever traveled to the South.

The clan founded by Kim Tae-seo, the Jeonju Kim, are a branch of the Gyeongju Kim clan, who were the royal house of the Silla Dynasty (57 B.C.E. - 935 C.E.). There are approximately 57,000 members of the Jeonju Kim clan currently living in South Korea.

The origins of the clan are well documented relative to the other hundreds of clans that nearly all Koreans belong to. A descendant of King Gyeongsun, the last king of Silla, Kim settled his family and relatives in Jeonju after Gyeongju in North Gyeongsang was devastated by the Mongol invasions in 1254 C.E., thus starting the new class.

Though it had been centuries since the Silla Dynasty gave way to the Goryeo Dynasty in the 10th century, Kim’s prestigious background secured him a position in the royal court in the capital, Kaesong, in present-day North Korea. According to the Goryeosa, or History of Goryeo, the principal surviving account of the dynasty, Kim Tae-seo served five kings and married one of his sons into the Choe clan, then the military rulers of the Goryeo Dynasty. South Korean history books teach that Kim Gyeong-son, one of Kim Tae-seo’s sons, was one of Korea’s greatest heroes who resisted the Mongol invasions.