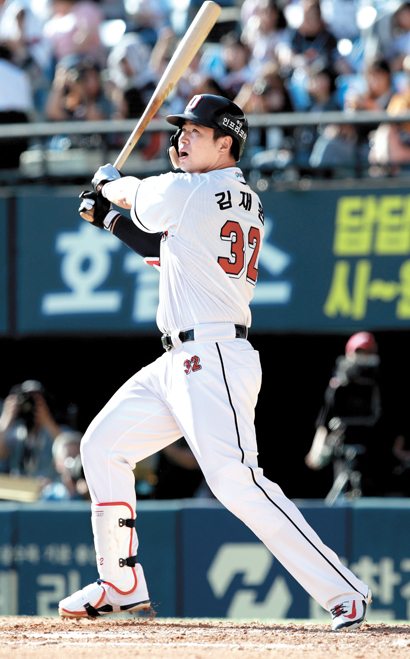 Kim Jae-hwan of the Doosan Bears at bat during a game against the Nexen Heroes at Jamsil Baseball Stadium in southern Seoul on Tuesday. [YONHAP]

Given the impressive frequency with which he’s been hitting balls out of Korea Baseball Organization (KBO) stadiums lately, it’s difficult to believe that Doosan Bears’ slugger Kim Jae-hwan was only a fringe player just three years ago, deemed not good enough to compete in the top-tier league.

Since then, he hasn’t just improved as a hitter. The 30-year-old has also learned how to control his emotions so that he is better equipped to survive the six-month grind that is the baseball season.

“Whenever I used to make the first-team roster, I was so happy that I’d call my wife and just laugh through the whole conversation. And then I’d go hitless at the plate and not say a word at home,” Kim recalled during an interview on Wednesday. “But now, I don’t get on these emotional roller coasters. Even if I fail today, I keep my head down and get ready for tomorrow. My wife thinks I am a completely different person now.”

Kim leads the league in home runs and RBIs, along with total bases (345) and hits (175). He’s also near the top in runs scored, on-base percentage and slugging percentage.

With 103 runs scored this year, Kim is also the first KBO player to put up 30 homers, 100 RBIs and 100 runs in three consecutive seasons.

Kim has been doing this for the club that clinched the best regular season record on Tuesday and is an odds-on favorite to win its third title in four seasons. As the best hitter on the best offensive team in the league, Kim will receive serious MVP consideration.

That’s some heady stuff for the one-time catching prospect.

Kim was drafted as a catcher in 2008 but was limited to 14 games that year. He completed his mandatory military service and rejoined the Bears in 2011, and started taking fielding practices at both first base and in the outfield.

With established catchers in the system, the Bears wanted to keep Kim’s bat in the lineup by moving him to a new defensive position. But Kim’s woes at the plate continued over the next few seasons as he split time between the KBO and its minor league, the Futures League.

And just before that turnaround season, Kim enjoyed a personal milestone, as he became a father of twin daughters in November 2015.

“I try to spend as much time with them as possible, and I think I’ve developed some patience in the process,” Kim said with a smile. “As a father, I’ve felt all kinds of emotions.”

Kim said he’s determined to end this year feeling a different sort of emotion than last year. The Bears lost to the Kia Tigers in five games in the 2017 Korean Series - the KBO’s championship final - but they look poised to return to the top in 2018.

“I hate losing more than ever, especially after last year’s Korean Series,” Kim said. “Before the start of the regular season, we didn’t think we had enough talent to win a championship, but we were determined to work hard for it.”