South and North Korea have agreed to form joint teams and hold a joint parade at the opening ceremony of the Asian Para Games next month, the South’s para sports body said Thursday. 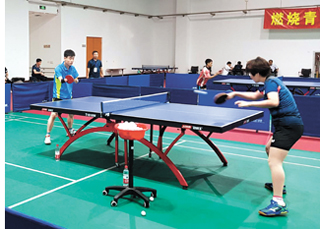 South and North Korean para table tennis players train together at a sports center in Beijing on Sept. 4. [YONHAP]

The Korea Paralympic Commitee (KPC) said the two Koreas will join hands for the first time in their para sports history when they participate in the 3rd Asian Para Games in Jakarta, which will be held from Oct. 8 to 16.

The two Koreas have yet to compete together in a multisport event for disabled people. South and North Korea previously planned to have a joint parade at the opening ceremony of the 2018 PyeongChang Winter Paralympic Games but couldn’t reach an agreement.

The KPC said that 200 South Koreans and 20 North Koreans will participate in the joint parade at the opening ceremony of the Asian Para Games in Indonesia. They will enter the stadium under the unified Korean flag and the two sides will later pick joint flag bearers.

The KPC said the Koreas also agreed to send joint teams to the men’s table tennis team event and the men’s swimming medley relay. The medals from these two events will count for neither South Korea nor North Korea in the Asian Games medal standings. Instead, they will be awarded to “Korea,” and the traditional folk song “Arirang” will be played as the teams’ national anthem.

The KPC said South and North Korea will enter the athletes’ village separately but will train together in the competition venues.

It added that the two sides agreed to run Team Korea House together during the Asian Para Games.

“The place will be a hub for inter-Korean sports exchange,” a KPC official said. “We’ll co-host events together and plan to open an inter-Korean exchange center.”

South Korea will be represented by 313 athletes and coaches in 17 sports at the Asian Para Games. According to the KPC, North Korea is expected to send a 24-member delegation, including seven athletes, and compete in three sports ? table tennis, swimming and athletics.