The Korean women’s volleyball team left for Japan on Thursday to compete in the 2018 FIVB Volleyball Women’s World Championship, which starts tomorrow. 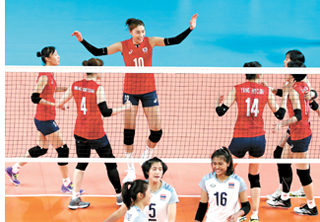 The Korean women’s volleyball team, in red, celebrates after scoring a point during a semifinal match against Thailand at the 2018 Asian Games at GBK Volleyball Indoor in Jakarta on Aug. 31. [YONHAP]

A total of 24 countries are assigned in four different groups for the first round of the World Championship. Korea, led by head coach Cha Hae-won, is assigned to Group C, along with 16th-ranked Thailand, 24th-ranked Azerbaijan, second-ranked United States, fifth-ranked Russia and 34th-ranked Trinidad and Tobago.

As Korea has a slim chance against the United States and Russia, the team’s goal is to win the three other matches.

After a short break after the Asian Games, the Korean women’s volleyball team gave up their Chuseok holiday and has been training at the National Training Center in Jincheon, North Chungcheong, since Sept. 9. The team will once again be led by captain Kim Yeon-koung.

This is considered one of the most important tournaments in women’s volleyball, as the event distributes world ranking points that will count towards the 2020 Tokyo Olympics. Only 12 teams will advance to the Olympics, and the quotas are distributed to the hosts, the top three teams in a World Qualifying Tournament, the winners of each of the three intercontinental qualifying tournaments and the five continental Olympic qualification tournament champions.

As the teams are assigned in groups based on world ranking points in the qualifying tournaments, Korea has to bring up their world ranking to get an easier chance to qualify. Korea is currently ranked 10th in the world.

As the host country, Japan is currently the only country to have qualified to the 2020 Tokyo Olympics in volleyball. In addition to its qualification, Japan will have the top seed in the Olympic tournament.