BTS speaks to the world

BTS speaks to the world

MIN KYUNG-WON
The author is a popular culture news reporter of the JoongAng Ilbo. 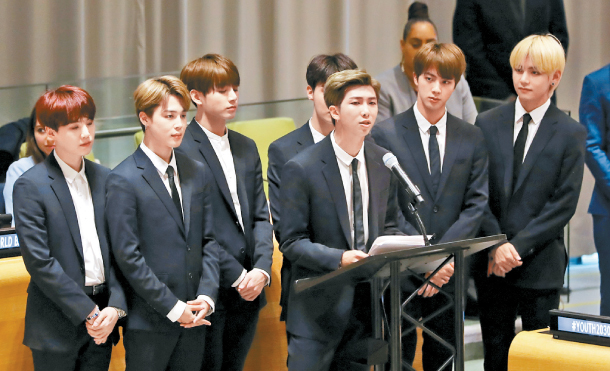 BTS makes a debut on the stage of the United Nations.

“I’d like to ask all of you: What is your name? ... Tell me your story.” BTS became the first Korean musicians to speak at the UN General Assembly this week. On Sept. 24, the band’s leader RM gave a speech as Unicef launched its new Generation Unlimited agenda to expand investment and opportunities for young people.

The 24-year-old leader represented the band and spoke about his childhood in Ilsan, Gyeonggi. He spoke about how he grew to be conscious of how other people perceived him and how he discovered himself through music.

It was a personal story about RM and the development of BTS at the same time. Their stories became the motive for their songs, as in the lyrics to “Intro: O!RUL8,2?” “My heart stopped when I was nine or ten. Put your hand on your heart and ask what your dream was. What it really was.” In the speech, RM emphasized, “No matter who you are, where you’re from, your skin color, your gender identity, just speak yourself.” This message was also conveyed in their song “Where Did You Come From?” where each member uses the dialect of his hometown.

That’s why their songs and speech were so loved. The Love Myself campaign raised 1.2 billion won ($1 million) in six months. Rather than abstract pleas, they shared their stories and told their fans to love themselves.

Rather than acknowledging their accomplishments like topping the Billboard charts, RM said, “Yesterday’s me is still me. Today, I am who I am with all of my faults and my mistakes.”

This may be the most helpful advice out there for the young people of today. Positive acceptance of the present self might be the first step to escape self-pitying. BTS started out with a relatively small agency and was once considered to have no hope for success. But today, BTS has blossomed and become the biggest band in the world.