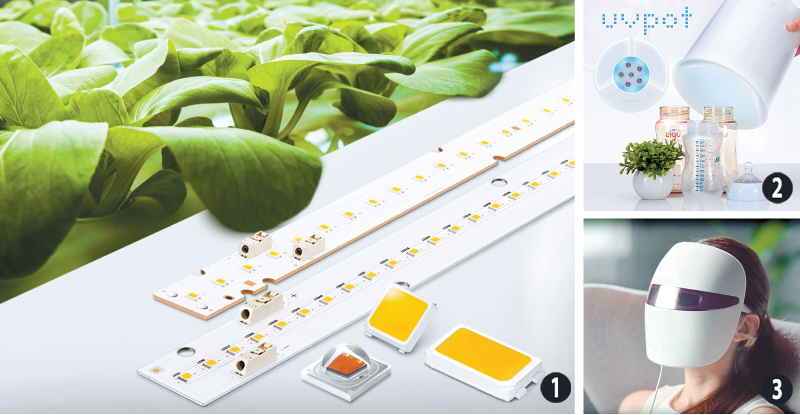 Korea’s light-emitting diode (LED) industry is picking up steam as businesses are finding creative ways to use the technology outside of traditional applications.

LEDs are semiconductor devices that emit light when electrically charged. They came into the limelight in recent years for their versatile uses that extend beyond just traditional lighting applications.

First developed by General Electric in the United States in 1962, LEDs gradually gained commercial attention for their energy efficiency and long lifespan. By the 2000s, LEDs became one of the most popular light sources across the globe.

Cosmetics and beauty companies have been eager adopters of LED technology in Korea. LG Electronics caused a sensation last year when it launched the Pra.L Derma LED Mask, promising consumers that the electronic mask’s LED rays will “penetrate into the skin at different depths to create transparent and elastic skin.”

LEDs are also being used to help grow crops. Early this year, Samsung Electronics launched the LH351B Red, a horticulture LED package that emits light that is optimal for plant growth and photosynthesis.

High-frequency ultraviolet (UV) LEDs, which emit UV wavelengths of 400 nanometers or less, are also being developed as a safer way to kill bacteria compared to older mercury-based UV alternatives.

The global LED market is expected to grow from $26.09 billion in 2016 to $54.28 billion in 2022, according to international research firm Zion Market Research. The market share of LED in the global lighting industry correspondingly rose from 6 percent in 2013 to 35 percent last year, according to Statista.

Korea’s LED market is anticipated to be worth over 10 trillion won ($9 billion) by next year, according to the Korea Association for Photonics Industry Development.

“The LED market is continuing to grow, as the technology is used in displays, agriculture and health care,” said Jung Yeon-sung, a business professor at Dankook University.

Not long ago, however, a government move threatened to preemptively kill Korea’s LED industry. In 2011, the government designated the LED industry as suitable for small and medium-sized enterprises (SMEs) and actively discouraged conglomerates from getting involved.

One by one, domestic conglomerates began falling behind foreign competitors in the global and domestic LED market. Even Samsung Electronics, whose then-president Lee Jae-yong showed personal interest in the technology, discontinued its overseas LED business in October 2014.

“It was a bit unreasonable to expect SMEs to lead the capital-intensive LED industry,” said a source from the industry who requested anonymity. “Most SMEs ended up shutting their LED business down, suffering from a lack of resources and technological capacity.”

The government finally opened up the LED industry to all companies in 2015, allowing domestic conglomerates to expand business in the sector.

Though foreign firms like the Netherlands’ Philips and Germany’s Osram already seized 80 percent of the domestic market by then, domestic heavyweights like Samsung Electronics, LG Innotek and Seoul Semiconductor were able to quickly make up for the lost years.

Last year, Samsung Electronics unveiled the world’s first projector-free movie theatre, which boasts unmatched brightness and resolution levels. Earlier this year, it also showcased The Wall, a 146-inch TV made of self-emitting MicroLEDs, which attempts to outshine LG’s OLED (organic light-emitting diode) TVs in screen brightness and color. Devices powered by diodes that can emit light on their own are valued for their low power consumption and ability to produce high contrast ratios.