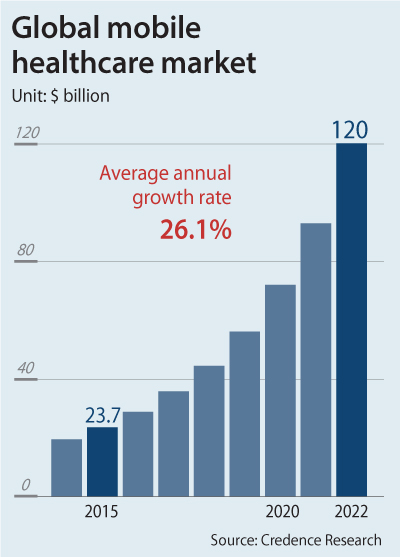 SK Telecom will offer mobile healthcare services in China after being stymied by regulations on its home turf, according to industry sources and regulators.

The top mobile operator in Korea is planning to offer services to manage patients with chronic diseases to hospitals and healthcare centers in Beijing, Tianjin, Jiangsu, Shanghai, Guangdong and Sichuan by 2023.

Diabetes is the kind of disease that can be managed with SK Telecom services. A diabetic can be treated by a doctor at a hospital but use mobile devices at home to monitor his or her condition. The proper dosage of insulin can be communicated by the doctor over the device.

The telecom arm of SK Group already launched a remote healthcare service in a hospital in Wuxi in China’s Jiangxu province, where SK Hynix has a semiconductor operation.

The Chinese government has been actively supporting remote healthcare services relying on mobile networks. But in Korea, those sorts of services have gotten caught in a web of regulations and opposition from doctors who feel their livelihoods are threatened if patients stop coming to see them in person.

“Patients have low access to medical services in China, leading to heavy demand for remote healthcare services,” said an SK Telecom executive. “The market is growing rapidly after tech giants such as Baidu and Alibaba have jumped in.”

“SK has expressed regret over having secured world-class healthcare technologies but not being able to properly mobilize them at home,” said a government official familiar with the situation at SK Group.

SK Telecom is not alone in giving up on Korean opportunities due to over-regulation. Hyundai Motor has made a series of investments in mobility service providers abroad this year. The top automaker invested in Grab, a Singapore-based ride-sharing firm, in January; in Car Next Door, an Australian peer-to-peer vehicle sharing network, in July; and in American transportation app Migo earlier this month.

In Korea, carpooling and ride-sharing services are practically banned. Hyundai Motor last year invested 5 billion won ($4.5 million) in Luxi, a Korean carpool start-up, but sold its stake in February after the company faced opposition from taxi drivers and the government cracked down on carpooling services.

“The ecosystem in Korea will inevitably lag behind when technologies, human resources and funding from high-tech sectors flee the country,” said Kim Young-jun, a professor of business administration at Sung Kyun Kwan University. “China has been proactively relaxing regulations to spur investments in innovative industries, threatening to outpace the United States.”

Some Korean companies have seen their potential go to waste due to over-regulation. Huinno, a Korean healthcare start-up, developed a smart watch that was able to track activity and heart rate but also check blood pressure and do electrocardiograms, but has not been able to sell the device for three years.

An electrocardiogram measuring instrument is classified as a medical device under Korean regulations and is supposed to be designed to withstand the high voltage of a hospital defibrillator. But that is not possible for a smart watch. In the meantime, Apple developed the Apple Watch Series 4, which has a heart rate monitor feature. It remains to be seen whether that feature will be approved by Korea’s health regulators.

Recently Huinno finally got approval to sell its smart watches. But CEO Kil Young-joon said he is dubious about success in competition against the Apple Watch 4.