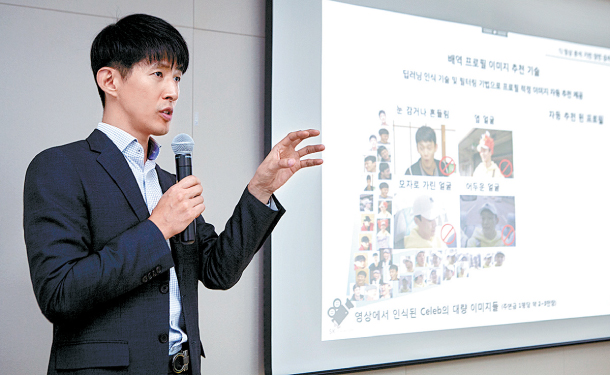 The upgrade in video search enables users to look for specific scenes in a movie or drama, SK added, while the refined curation scheme gives users personalized content recommendations.

Competition in the local online media market has grown fiercer since the global giant Netflix entered the Korean market in 2016. Korea’s largest mobile carrier is working to meet that competition and expand the user base of its media services by adding the new capabilities.

SK Telecom said it set to work with its internal Media Technology R&D Center, established early this year, its AI technology team and its IPTV service affiliate SK Broadband to develop an AI-based video recognition technology. The technology groups scenes in a movie by the actors that appear in the scene or by a specific action that’s taking place.

If someone wants to watch, for example, scenes in “La La Land” where the stars are kissing, the AI first pick out all the scenes where Emma Stone and Ryan Gosling appear together. Then the AI selects scenes where they kiss.

SK Telecom says it plans to open its service, called Scene Discovery, in its IPTV Btv and mobile video streaming platform Oksusu within this year. Later, the mobile carrier will train the AI with more emotions and dialogue in the scenes.

“We added the service considering consumers’ video consumption habits,” a spokesperson from SK Telecom said. “They watch short videos to their taste on mobile phones.”

Personalized content curation is already available to some heavy users of Oksusu. The company added an upgraded curation system for some users on Sept. 14 so they get tailored feeds when they open up the app, as Netflix provides. The Korean company is working to enable content curation for all Oksusu and Btv users.

The new content recommendation technology is built based on recurrent neural network, a type of AI that can recognize patterns in a sequence of data. SK Telecom said its technology is the most advanced AI network used for content curation, and can do things like remember the order in which individual users watched video clips in the past.

“We don’t know which curation algorithm Netflix uses; the company doesn’t really say,” said Lee Jong-min during a press briefing held Thursday. He is a senior vice president and head of the Media Technology R&D Center at SK Telecom. “But I’m confident that our recommendation technology is on par with or even better than Netflix’s.”

Lee added, though, that SK is not the first company to develop these curating technologies and said it will keep benchmarking services already in the market that are favored by media consumers.

SK Telecom also has a bigger picture in mind for its media business. Lee said the company will link its music streaming service Music Mate, the video app Oksusu and its affiliated online commerce platform 11st by 2020 so they can cross-recommend the others’ content and products.