Moon calls for end to war in speech to UN

Moon calls for end to war in speech to UN 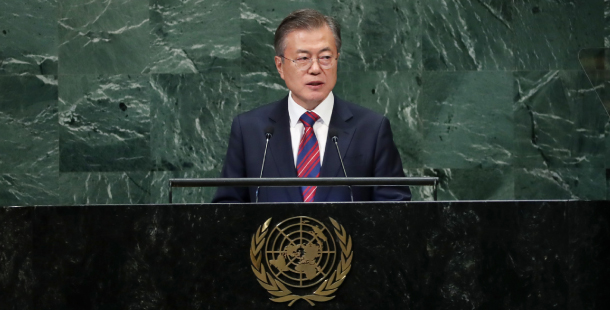 President Moon Jae-in delivers his address at the 73rd session of the UN General Assembly in New York on Wednesday. [YONHAP]

President Moon Jae-in on Wednesday called for a formal end to the 1950-53 Korean War, saying it is a process that related countries “must go through in order to move towards a peace regime” in his address to the United Nations General Assembly.

The conflict ended in an armistice, not a peace treaty, leaving the two Koreas technically at war.

“The Korean Peninsula has remained under the armistice over the past 65 years. Ending the Korean War is an urgent task,” said the president before diplomats from across the world, including North Koreans, who were intently watching Moon’s address. “I look forward to seeing bold measures for denuclearization implemented among the related countries, leading to the declaration to end the war.”

Moon’s emphasis on formally ending the war is not new. For months, his administration has been trying to bring North Korea and the United States closer on denuclearization so that the Korean War can be formally ended as a first step toward peace. Moon also attempted to placate North Korea hawks and others dubious about Pyongyang’s sincerity. He said an end-of-war declaration could be revoked any time should the North go back on its denuclearization promise in an interview with Fox News on Tuesday in New York.

Moon, who was born to refugees from the North who settled in the South at the height of the Korean War, also touched upon the United Nation’s goals to urge the international community to guide Pyongyang toward the path of prosperity. Moon stressed that the South Korean government would go to every length to help achieve this objective.

“The United Nations has stated its commitment to “leave no one behind.” My sincere hope is that the UN’s vision of sustainable development will be realized on the Korean Peninsula,” he said. “I have no doubt that if the international community paves the way, North Korea will not stall on making strides towards peace and prosperity. The Republic of Korea [South Korea’s official name] will spare no effort to guide North Korea towards that path.”

Moon, however, said that the South would adhere to economic sanctions imposed on the North by the UN over the North’s long-range and nuclear tests. President Moon began his address by reflecting on the fast-changing diplomatic situation around North Korea over the past nine months, during which there have been three inter-Korean summits and a historic summit between the North and the United States in June. This is a sharp turn from a year earlier, when Pyongyang and Washington appeared to be on the brink of a full-fledged conflict.

“Over the past year, something miraculous has taken place on the Korean Peninsula,” said Moon.

The South Korean president said that he and North Korean leader Kim Jong-un “removed the shadow of war and resolved to usher in an era of peace and prosperity.”

Moon lauded President Trump and Kim, thanking them for their “courage and resolve as they usher in a new era on the Korean Peninsula as well as in U.S.-North Korea relations.”

Moon’s upbeat speech Wednesday differed dramatically in tone and message from his UN address last year. In the wake of Pyongyang’s sixth nuclear test and intercontinental ballistic missile launches, Moon expressed his “great disappointment and indignation” with the Kim regime and promised to cooperate with the UN for “stronger sanctions and pressure to make North Korea stop its provocations.”