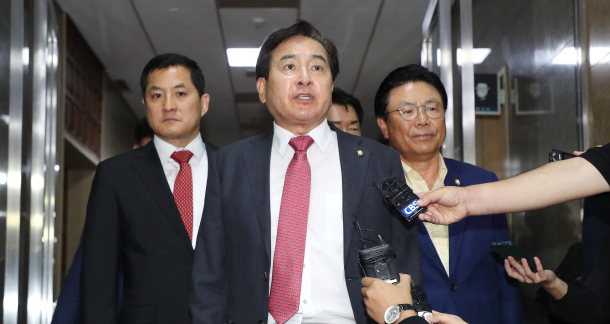 Rep. Shim Jae-cheol, center, of the largest opposition Liberty Korea Party, speaks to reporters after visiting the office of Speaker Moon Hee-sang to protest his allowing prosecutors to raid his office in the National Assembly Members’ Office Building in Yeouido, western Seoul, on Thursday. [YONHAP]

An opposition lawmaker on Thursday raised an allegation that the Blue House misappropriated 245 million won ($220,000) in the name of operational expenses from May 2017 through last month.

Rep. Shim Jae-cheol of the Liberty Korea Party (LKP) issued a press release entitled “Unveiling of the Blue House’s inappropriate management expenses” in which he argued presidential staff spent 245 million won in dubious circumstances, such as spending the money after 11 p.m. on weekdays or on weekends.

According to the lawmaker, the Blue House spent a total of 204.6 million won on operational expenses on weekends and holidays over a period of 18 months on 1,611 occasions. Another 41 million won was spent past 11 p.m. on weekends over the same period, raising questions about potential misuse of taxpayers’ money.

“Under the government’s budgetary and spending guidelines, use of operational expenses [by public officials] during irregular hours that are past 11 p.m. and on national holidays and weekends is prohibited in principle,” the former journalist said in the press release.

It took just hours for the Blue House to issue a rebuttal, calling the five-term lawmaker’s allegation “far from true” and saying that he “didn’t even check the basic facts.”

“Due to the special nature of state affairs of the Blue House, it is inevitable for officials to conduct urgent national business well past the customary working hours of between 9 a.m. and 6 p.m. for a variety of issues such as foreign affairs and national security 24 hours a day throughout a year,” said the Blue House in a statement released Thursday.

It said that spending past regular working hours and on weekends is permitted as long as government officials submit document references to explain the reasons for the spending.

“With daily monitoring by the office of administration, the Blue House is putting its upmost efforts into preventing misuse of funds,” said the Blue House.

On the opposition lawmaker’s criticism that funds were spent at bars at night, there have been “some cases in which meetings were held late at night for inevitable reasons at restaurants registered as bars.”

The office said it was because regular restaurants were closed at late hours and that the bars used were practically restaurants serving both drinks and food.

Shim’s revelation came amidst a prosecutorial investigation into an allegation that the lawmaker’s aides illegally accessed and leaked digital files containing budgets and confidential state statistics from a finance website run by the Korea Public Finance Information Service.

Prosecutors on Friday raided Shim’s national assembly office and homes of three of his aides on suspicions that the aides accessed the digital files without clearance and leaked them. The raid came after the Ministry of Economy and Finance recommended Shim’s three aides to be investigated on suspicions of unauthorized access to fiscal data. On Thursday, the Finance Ministry said it would also recommend the veteran lawmaker to be investigated.

The Friday raid prompted a backlash from the LKP, which called it “government-orchestrated suppression of the opposition” during an emergency meeting convened at the National Assembly Thursday.

“This is an act of suppression against the opposition by the government to incapacitate our party during a parliamentary audit period,” said LKP floor leader Kim Sung-tae during the emergency meeting. “We will uncover the truth that this is in fact a long-planned government scheme to repress the opposition.”

With the LKP’s protest of the prosecutorial probe targeting Shim, the prospect of partisan gridlock during the ongoing Assembly session is on the rise.