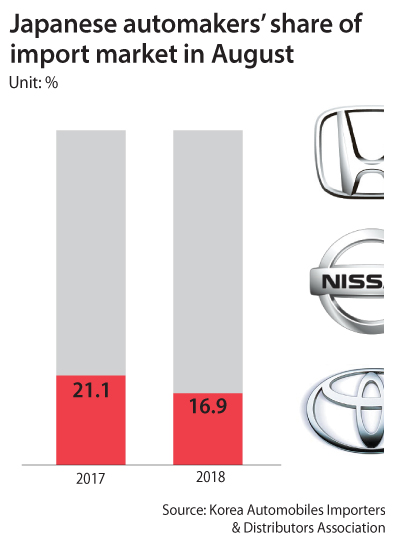 Japanese carmakers have been enjoying unprecedented success in Korea over the past few years. They’ve benefited from Volkswagen and Audi’s absence from the local imported car market due to emissions scandals.

But their sales boom is coming to an end.

The German marques have returned to Korea, and an end to a government subsidy for hybrid vehicles is expected to hit the Japanese companies hard. Japanese automakers have strong hybrid lineups and have benefited from rising interest in eco-friendly powertrains.

According to the Korea Automobile Importers & Distributors’ Association, Japanese cars accounted for 16.9 percent of imported car sales in August compared to 21.1 percent in the same month one year ago. In terms of accumulated sales for 2018, the percentage of Japanese cars in the imported car market was 15.4 percent through August compared to 18.7 percent during the same period last year.

Potential customers of Japanese brands have been sucked up by various competitors, but Volkswagen and Audi’s return to the Korean market has been the biggest factor.

In August, Audi, which currently only sells three models in Korea, shot up to third place among imported car companies, selling 2,098 cars. It was followed by Volkswagen with 1,820 units. Toyota was in fifth place with 1,326 cars and Honda was in 10th place with 724 vehicles sold.

Early this year, before Volkswagen and Audi came back with key models like VW’s Tiguan SUV and Audi’s A3 and A6 sedans, Toyota and Lexus were switching places between third and fourth after Mercedes-Benz and BMW.

The Ministry of Environment announced early this month that it would eliminate the 500,000 won subsidy given to buyers of hybrid vehicles next year. Last year, 93 percent of the cars sold by Lexus and 63 percent of the cars sold by Toyota were equipped with hybrid powertrains. The carmakers’ bestselling models are hybrids - the ES 300h for Lexus and the Camry Hybrid for Toyota.

As more carmakers jump into that segment, competition is getting tougher for the Japanese.

“Japanese carmakers have a competitive edge in hybrids, but with an increasing number of competitors in the market from domestic players, with their inevitably lower prices, Japanese cars’ stance here could be threatened,” said Kim Pil-soo, an automotive engineering professor at Daelim University.

Toyota currently sells 11 models in Korea, and six of them have hybrid powertrains.