Korea Sale Festa is shorter this year and has lower budget

Korea Sale Festa is shorter this year and has lower budget 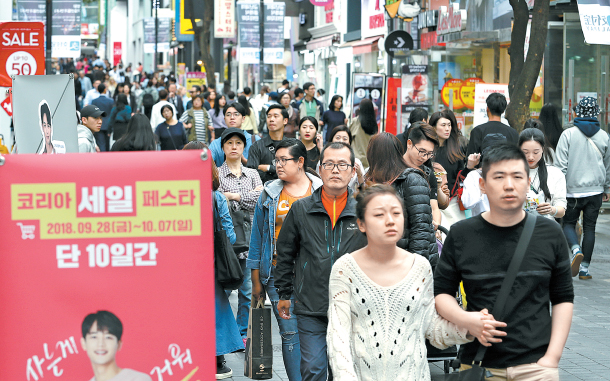 The street of Myeong-dong, a shopping district in central Seoul, is crowded with tourists and shoppers on Friday, when the annual Korea Sale Festa kicked off, offering discounts on a range of products from clothes dryers to automobiles for 10 days. [YONHAP]

The annual Korea Sale Festa, which the Korean government has been promoting as a Korean version of Black Friday, offers reduced prices on items ranging from electronics and apparel to automobiles and furniture for 10 days through Oct. 6.

Some 231 companies are participating in the event and 20 of them, including Samsung Electronics and LG Electronics, are offering up to 80 percent discounts on some products.

So-called “killer items” picked by the government for big discounts include Samsung’s Grande clothes dryers, which will sell at discounts of up to 20 percent, and LG’s OLED TV, which will have prices slashed by up to 25 percent.

Hyundai Motor has designated 8,000 vehicles including Avantes, Sonatas, Grandeurs and Velosters to sell at discounts of up to 15 percent.

The festival period was shortened to 10 days from one month the last two years because critics said the lengthy period did not particularly boost sales.

The joint hosts of the festival - the Ministry of Trade, Industry and Energy, and the Ministry of Culture, Sports and Tourism - said they would have non-government organizations manage it.

The candidates include the Korea Chamber of Commerce and Industry, a business lobbying group.

The festival was launched four years ago by the Park Geun-hye administration, and some industry insiders say the Moon Jae-in administration has been less active in promoting it.

The number of participating companies has been nearly halved and the budget for the event was slashed by more than 30 percent to 3.45 billion won ($3.11 million).

Last year, Korea Sale Festa boosted the sales of major offline retailers, including department stores, discount and duty-free shops, by 8.3 percent to 9.43 trillion won during the period compared to a year earlier, according to government data compiled from reports by 100 companies that provided figures.