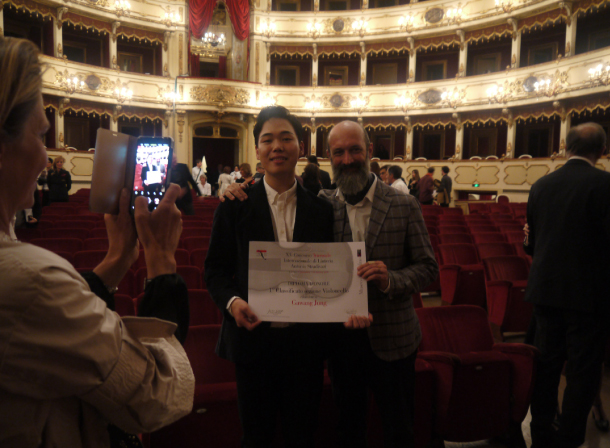 A young Korean cello maker has topped a prominent international competition in Italy for making string instruments in the category.

Jung Ga-wang, 28, became the first Korean to take the gold medal at the 15th International Triennale Violin Making Competition Antonio Stradivari in Cremona, Italy. He is also the youngest award winner ever at the “Olympics for violin making” held in the hometown of the legendary violin maker Antonio Stradivari. The event closed Wednesday.

Three Koreans have previously won bronze medals in the cello and viola categories. Jung also won three other awards at the competition as the best luthier under the age of 30 and as the best non-Italian crafter.

He is the first gold medalist in the cello category since 2009 after the panel of juries withheld the top honor for the last two events.

Jung graduated from Cremona International Violin Making School, or Scuola Internazionale di Liuteria Cremona, in 2015 before working at the atelier of Italian violin maker Francesco Toto, the gold medal winner of the competition’s 2006 event in the cello category.

Despite his brief cello-making career, Jung was reportedly named the winner in recognition of the balance of his cello’s four strings and its subtle colors and resonance.

“I chose the path of string making since I wanted a vocation to which I could entirely devote my passion,” Jung noted. “I put out all my soul into making the cello for a whole year but never expected to win the top prize. I feel like I am dreaming.”

Still, he has a long way to go, Jung said.

“My goal is to make instruments for musicians, ones that they feel comfortable with, and they give credit to.”

Jung’s cello will be purchased by the organizer of the competition for 24,000 euros ($28,000) for a permanent display at its museum, along with other winners.

Also at the same competition, another South Korean luthier, Park Ji-hwan, won two medals, silver in the cello category and bronze in violin, cementing the presence of Koreans in the field of making string instruments.