The view of North Korea from bus No. 14

The view of North Korea from bus No. 14

Pyongyang residents cross the street on Sept. 19, the second day of the inter-Korean summit in Pyongyang. The men still primarily dressed in Mao suits, but the women were wearing brighter and freer clothes than before. We could witness a changing North Korea. [JOINT PRESS CORPS]

It was a dreamlike three days. Visiting Pyongyang as part of the special entourage for the third inter-Korean summit between South Korean President Moon Jae-in and North Korean leader Kim Jong-un was an enormous honor. Members of the entourage had no special tasks. They just had to be there, like guests at a wedding or members of a chorus in an opera.

We went where we were told to go and did what we were asked to do, and never did I think that such passivity could be so satisfying. The fact that I left my phone back at the airport in Seoul also helped emancipate me from quotidian monotonies.

We arrived at Pyongyang Sunan International Airport at 10 a.m. in the morning on Sept. 18. I was assigned to sit on the last bus reserved for the special entourage, bus No. 14. It is customary to relegate representatives of the arts and culture to the bottom when organizing a ceremonial guest list, but I’ve always chosen to think that arts and culture are kept back for the grand finale of a performance.

Though I was only acquainted personally with the poet Ahn, my free spirit and innate sociability soon brought the passengers on bus No. 14 together as a quasi-family.

I have to admit, while the sports figures were easy to approach — a smile and handshake did the trick — it was less easy to find things in common with the young singers on the bus. Thankfully I had seen ALi on “King of Mask Singer,” a popular TV program where singers perform with their identities hidden with masks, which helped bridge the generational gap with these performers half my age.

An endless welcoming parade stretched on as our bus made its way from the airport to Pyongyang’s city center. Young and old alike, women dressed in hanbok (traditional Korean attire) and men in Mao suits, waved and shouted, “Peaceful unification!” Coach Cha, for whom this was the first visit to North Korea, responded to these greetings and then turned his face away from the window, shyly telling me he could not resist tearing up. In a moment like this, let your tears flow, I told him, as my own eyes teared up. 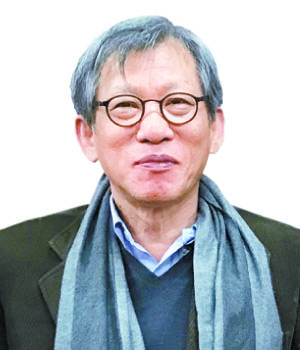 Athletes, in my experience, often have tender dispositions and are apt to think in philosophical terms. By contrast, performers have bright personalities and are optimistic in their nature. The young singers on our bus looked like they were struggling to find words to describe this exceptional situation. A few exclaimed, “Daebak!” a phrase used by youngsters when surprised. Literally, it means “jackpot.” I thought to myself that the inclusion of these youthful souls in the special entourage would be crucial in conveying the challenge of unification to the younger generation of our country.

After lunch at the Koryo Hotel in central Pyongyang, bus No. 14 accompanied South Korean first lady Kim Jung-sook on a visit to a local children’s hospital. As our bus passed through the streets of Pyongyang, I carefully examined the cityscape through the window. This was my fourth visit to Pyongyang. I visited twice in 1997 and 1998 to write “My Journey to North Korea’s Cultural Heritages” a travelogue for the JoongAng Ilbo, and once more in 2006 as part of a high-level inter-Korean meeting when I was the head of the Cultural Heritage Administration. During this last visit, I was involved visiting the Complex of Koguryo Tombs in Pyongyang after they were recognized as a Unesco World Heritage site.

Two decades ago, my impression of Pyongyang was that it was a gray city highly standardized in everything. In all honesty, its citizens, their clothing and expressions looked alike. No impression was made. That feeling lingered on in my next visit ten years later.

But the Pyongyang I saw on this trip looked completely different. Things looked brighter. Skyscrapers had sprouted where there were none before, their walls painted in bright pink or violet colors. Many buildings had beautiful contours and shapes.

What most struck me, however, was the everyday life of Pyongyang’s citizens. A large portion of the city’s inhabitants were still dressed in Mao suits or school uniforms. But in between, I observed a few adorned in elaborate clothing. Many walked around with smartphones in hand, their steps embodying a sense of freedom from regulation.

There are over 5.7 million cellphones in use in North Korea, and over 460 large marketplaces — changes which followed its government’s implementation of a performance-based pay system departing from its communist roots. One person observed that, as soon as capital takes root in North Korea and its citizens become used to this virus we call “money,” their approach to life will become closer to ours.

When we reached the Okryu Children’s Hospital, a top-quality medical center in Pyongyang, we saw North Korea’s first lady Ri Sol-ju waiting at the entrance preparing for the arrival of South Korea’s first lady Kim Jung-sook. She stood outdoors for over ten minutes. They say you can always gauge the sentiments of others through their ceremonial protocol, and the North Koreans maintained a remarkable show of deference in this summit from its beginning to its end.

We visited the Pyongyang University of Music and Dance, which is dedicated to Kim Won-gyun, composer of the “Song of General Kim Il Sung” — possibly the most sung song in North Korea. A welcome concert was held at the Pyongyang Grand Theatre, which resembled a performance by North Korean artists at central Seoul’s Jangchung Arena during this year’s Winter Olympics. The North’s performers sung popular songs from the South like “Morning Dew” and “Man is Ship, Woman is Harbor,” using a vocal technique unique to the North.

That night, there was a grand welcoming banquet at Mokran House in Pyongyang’s city center. It was finally time for the passengers of bus No. 14 to play their roles at the summit. As guests were finishing up their meals to the classical tunes of North Korea’s State Symphony Orchestra, our performers took to the stage. First, Ailee sang “I Will Go to You Like the First Snow,” her best-known song. The North Koreans listened as if staggered by her performance. They became bewildered when Zico followed up with “Artist,” one of his signature rap songs. They appeared to be moved when ALi sang “365 Days” and Kim Hyung-suk played the traditional piece Arirang on the piano. But all in all, the audience seemed to accept the performance more than liking it.

In a sense, the North Koreans’ bewilderment was shared by some in the South Korean entourage above a certain age. In my view, attempting to understand the younger generation is as important as the nuclear issue.

Nonetheless, the atmosphere during the banquet was bright, enlivened by the marvelous performance of the magician Choi Hyun-woo. His wondrous movements generated much laughter at the head table, where the heads of state sat together.

The next morning, we accompanied first lady Kim to the Mangyongdae Children’s Palace, an extracurricular educational facility for Pyongyang’s youth, then moved to the famous Okryu Restaurant, best known for its cold noodles, or naengmyeon. I sat at the head table with the two leaders and, from the South Korean entourage, former Unification Minister Lim Dong-won, Seoul National University Prof. Paik Nak-chung, chairman of the Korea Peace Foundation Hong Seok-hyun, former acting Prime Minister Chang Sang and coach Cha. From North Korea were Kim Yong-chol, vice chairman of the Central Committee of the Workers’ Party, and Ri Su-yong, director of the committee’s International Affairs Department.

When we walked downstairs to greet the two leaders, we saw that Kim Jong-un had arrived ten minutes early and was waiting for President Moon at the entrance. The president was delayed for another five minutes and Kim waited for him — standing — for almost 15 minutes.

When we sat down, North Korean First Lady Ri Sol-ju asked me how naengmyeon was served in Seoul, while Kim Jong-un brought up the topic of a famous liquor made from berries native to Mount Paektu. I explained to them the details behind South Korea’s present to the North, a 6.6 meter (21.6 feet) tall and 4 meter wide copy of the Daedongyeojido, a large scale map produced by Joseon Dynasty (1392-1910) cartographer Kim Jeong-ho in 1861. I also told them that my travelogue of North Korea’s cultural heritage sites was not complete since I had yet to visit Hamhung, the traditional capital of the North’s Hamgyong Province. As soon as President Moon heard my story of the famous Joseon Dynasty calligrapher Kim Jeong-hui’s crossing of the Manse Bridge in Hamhung during his exile to Korea’s northern areas, he chimed in with a story of a famous bridge in Wonsan told to him by his parents, who were refugees from Hamgyong Province during the Korean War of 1950-53. Kim looked impressed when I talked about the Pukkwan Victory Monument — a stele commemorating Korean military victories during the Japanese invasions of the 16th century — located in Kilju County, North Hamgyong Province, and President Moon reminded him again that I was an expert in Korea’s cultural heritage.

After the meal, we followed the president as he stepped onto the restaurant’s balcony to look at the Taedong River, which bisects Pyongyang. Former Unification Minister Lim Dong-won told me that Kim Yong-chol told Kim Jong-un that I was one of the three most famous raconteurs in the South. Somehow this story was later retold to say the North Koreans know me as one of the three best-known charlatans from the South.

Our next stop was the Mansudae Art Studio, one of the largest centers of art production in the world. Here I bought an oil painting of a white birch forest in commemoration of the visit.

The mass games that evening at the May Day Stadium were a spectacular experience that exceeded our expectations. President Moon made a historic speech at the event in front of a crowd of 150,000 in which he said we Koreans have “lived together for 5,000 years and apart for 70.” I could feel my chest thump and tears roll down my cheeks as I heard the president speak. I thought then that this was the highlight of the third inter-Korean summit.

But the following day, we unexpectedly headed to Mount Paektu. Though we departed early at around 5 a.m., an enormous crowd was waiting in the dark along the streets waving goodbye with flowers in their hands. I told the passengers of bus No. 14 of the grandeur of Mount Paektu, which I likened to Bach’s music just as Mount Kumkang is like that of Mozart. I told them that they would see a thick forest of pine and larch trees until stepping into an empty plain reaching the summit, where an enormous crater filled with blue water stretched before them.

And like a miracle, there were no clouds or wind at the summit of Mount Paektu that day. When the two leaders raised their hands on what was possibly the clearest day on Chonji Lake since our nation’s foundation by the legendary Dangun, I once again felt my eyes tear up. The photograph taken that day of the backs of four bus No. 14 passengers gazing at the lake will forever commemorate the emotions we felt during the summit.

It was a dream of a visit.