Police grilled Jeju Gov. Won Hee-ryong on Friday about a host of allegations including violation of election laws and accepting a free membership at a fancy golf club. 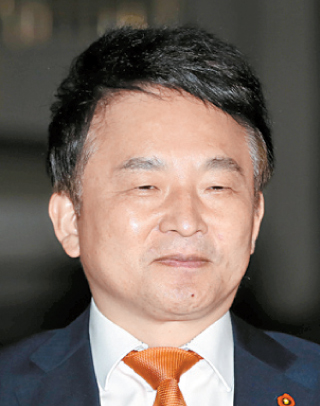 Won, the only independent governor in all of Korea’s 17 provinces or provincial-level cities, arrived at the Seogwipo Police Precinct for a second time on Friday after undergoing three hours of questioning by police a day earlier.

When asked about a real estate development project financed in part by Chinese capital as a guest on a radio program on May 16, Won suggested that his predecessor as Jeju governor and Moon may have pushed through the scheme in 2011, when Moon was speaker of the provincial council.

Heavy Chinese investment continues to be controversial in Jeju, with many residents arguing that politicians like Won have been too eager to entice Chinese money at the expense of its natives.

Moon, who campaigned to end reckless development on the island fueled by Chinese capital, subsequently sued Won for libel.

The governor is also accused of premature campaigning during the gubernatorial election by announcing his campaign platform through loudspeakers at a wedding in Seogwipo on May 23 and promising a youth jobs program to university students at the Jeju Tourism College on May 24.

Both events took place before Won officially registered as a candidate for the election and before the official campaign period began on May 30.

Won was eventually reelected as Jeju governor on June 13 with 50.3 percent of the vote, with Moon trailing at 41.8 percent.

In addition, Won faces two separate accusations of corruption and perjury for having allegedly received a special membership at a luxury golf resort after he was first elected governor in August 2014.

The accusation was first brought up by Moon at a televised debate on May 18 during the campaign. Won denied the claim on May 26, saying he did receive an offer for a special membership but turned it down and that he never played golf while in office as governor.

The Democratic Party’s Jeju chapter filed a criminal complaint against Won for corruption and spreading false information through his denial on May 26.

Before entering the police office in Seogwipo for questioning on Thursday, Won told reporters that the cases he faced related to “unresolved incidents” raised by his opponent in the June local elections and that he would undergo questioning candidly.

If charged and found guilty of these allegations, Won’s status as governor could be in jeopardy. Current law stipulates that any elected public servant fined over a million won ($900) for violating election laws must be removed from office.

This is the first time a sitting Jeju governor has been investigated by police since former Gov. Woo Keun-min, was charged and acquitted of a host of allegations in 2010.